Clark Lombard Ring was a young boy when his father, Eleazar Jesse Ring, was transferred to Saginaw from Sandusky, Ohio, to manage the Ryan and Johnson Company’s lumber operations in the Saginaw Valley. As Clark and his older siblings, William and Annie, grew up, they watched Saginaw change from lumbering village to prospering city.

Clark followed his father’s footsteps and entered the lumber business as a young man. His ambition and business skill soon landed him a management position overseeing several lumber companies that he and his father owned.

C. L. Ring’s marriage to Elizabeth (Lizzie) Palmer Merrill (1862-1912) in 1883 united two of the most influential lumber families in Saginaw. In 1886, Clark and his father-in-law, Thomas Merrill, began the Merrill and Ring Lumber Company that continued to grow and diversify for decades.

C. L. Ring was a key negotiator in the consolidation of Saginaw City and East Saginaw resulting in the creation of the present City of Saginaw in 1890. After the formation of the new city, he continued his commitment by becoming a member of the board of aldermen. He also loved the outdoors and spent much of his free time hunting and fishing with his companions — those with two legs and four.

With his encouragement, land owners in the Higgins Lake area north of Saginaw preserved strands of old growth pines so the area would be unspoiled for use as a summer retreat for Michigan residents. In addition to giving birth to their three children, Thomas (Tommy) Merrill (1884-1937), Jessie Clark (1885-1947), and Elizabeth Clark (1891-1957), Lizzie ran an efficient yet loving home and was very active in several charitable organizations.

Following his father’s death in 1896, C. L. Ring inherited the family’s home at 1126 North Michigan Avenue, one of Saginaw’s more fashionable neighborhoods. The house was an imposing Italianate-style home constructed in 1896. It featured broad porches and a three-story tower. The Rings lived in the home for seven to eight years during which time they began planning for a new home to be erected on the site. 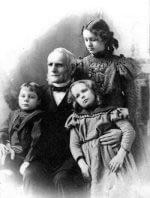 About 1903 the Rings commissioned noted New York architect, Charles Adams Platt, to design the Ring family home. Though Platt had already achieved international recognition for his etchings and paintings, he had only recently obtained national prominence as an architect of landscapes and private homes. Long after its completion, in 1946-47 Elizabeth Ring Ireland Mather and her sister donated the Platt designed family home for the Museum. This home is the foundation and grandest piece of the Museum’s permanent collection.

Charles Adams Platt, son of a wealthy New York City family, was born on October 16, 1861. When he was seventeen years old, Platt nurtured his love of art by enrolling in art classes at the Art Students League and the National Academy of Design. There he learned the art of etching. This complex form of printmaking, developed during the Renaissance, uses acid to etch or bite lines into metal plates. In this way, several tones could be achieved without losing clarity of details.

Within two years, Platt was recognized as an important American artist. His etchings were widely exhibited and he was featured in an article in American Art Review (1811), the prominent art journal of the 1880s. In 1882, Platt received international acclaim when he was elected to Britain’s prestigious Royal Society of Painter-Etchers.

Platt traveled to Paris in 1886 for greater inspiration and challenges. He established his own studio and developed his own program of study. His etchings were very popular and he comfortably supported himself by selling his art. Shortly after his arrival on the Parisian art scene, his etchings and paintings were accepted at the Paris Salon, a famous annual exhibition that shaped artists’ careers from around the world.

While working in his Paris studio, Platt took time to travel to other European countries. He spent much time in Italy where he became enthralled with Italian landscape and culture. Italian villas of the Renaissance and Baroque periods captivated his interest. In the early 1890s, Platt and his brother, who was studying architecture, returned to Italy to study and record many of the great Italian villas.

Shortly after the brothers returned to the United States, Platt’s brother died in a tragic swimming accident. Platt used the material that they had assembled to write two articles for Harper’s Magazine in 1894. He also wrote a book entitled Italian Gardens, which was published in 1893.

As a result of this book, Platt developed a reputation as an authority on landscape design. The National Academy elected him as an associate member for his accomplishments as an architect, not an artist. He received several commissions to design large-scale gardens which garnered much attention in the national press. Platt, however, was not satisfied with creating gardens for pre-existing homes as he wished for the opportunity to design an entire property in the Italian villa style.

About 1903, Platt accepted the Rings commission for a new home and created what would eventually become the home of the Saginaw Art Museum.

Charles Adams Platt designed the Ring family house and gardens with an Italian villa in the Georgian Revival style in mind. The plain symmetrical exterior of the house with its predominance of red bricks and white pillars and pediments, contrasts with the richly decorated interior. Platt carried the same symmetrical geometric structure from the foundation of the house through the facades and into the formal garden. By doing this, the design achieved unity in that each section reflects the other sections in composition and style. 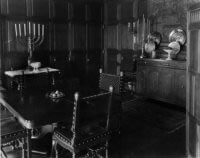 Platt designed the house with both public and private spaces for the Rings as well as secluded spaces for the domestic staff who lived and worked in the home. He accomplished this design by including several regular and blind doors to close off and obscure certain areas of the house. Platt also included three staircases so that the domestic staff could have access to all of the levels without being noticed and Thomas Ring could ascend to his suite of rooms on the third floor without using the servants’ staircase. 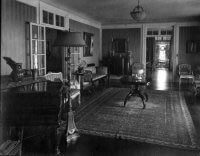 The public space of the first floor included the dining room, music room and drawing (Living) room. The dining room was the only room with unpainted wood. The dark butternut paneling created a warm interior for entertaining. Clark, an amateur violinist, and Lizzie, a pianist, insisted on having a music room for spirited family gatherings as well as for entertaining guests. The drawing room was used as a combined living room and library.

The domestic staff worked in rooms on the first floor, such as the large kitchen, as well as in the basement where the laundry room, wine closet, fruit closet and other work spaces were located. There was also a butler’s hall on the first floor which the staff could use as their drawing room.

Platt was attentive to all the details of his design. He created floors with decorative patterns, designed moldings for each public room and selected most of the original decorations, fixtures and furnishings for the home. Most of these originals now belong to the Ring family descendants.

The Ring children lived in the house until they married and began lives of their own. The parents lived in the house until their deaths (Lizzie in 1912 and Clark in 1933). The Virgil Kirkham family purchased the home from the Ring estate and lived there until 1946. The home was later purchased by Jessie (Ring) Garrett and Elizabeth (Ring) Mather who intended to donate the house and gardens as a museum to the citizens of Saginaw. Sadly, Mrs. Garrett died before the museum opened its doors. Mrs. Mather generously donated money, artwork and leadership to the fledgling museum until her death in 1957.

Platt filled the formal garden with a variety of plants and flowers. He intended it to bloom from early spring through the first frost in the fall excluding a two-week period in August when the Rings vacationed. 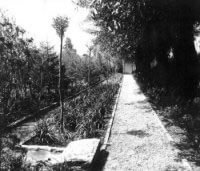 There were wild roses along the slope of the terrace and German irises, peonies, hollyhocks, Easter lilies and chrysanthemums within the barberry hedges of the formal garden. In the fountain were three false papyruses and three water lilies. In addition, there was a multitude of potted plants and flowers strategically placed along the paths of crushed stone and fences. The outdoor buildings, the tool house and pavilion (though it was designed with a solid roof like a pergola), were designed to complement the design of the house. These buildings were decoratively draped with grapevines. There were also a few outdoor sculptures.

For the bosco (wild garden), Platt designed an area that would appear natural but actually followed his design principles. The main entrance to the bosco was an open gate located in the northwest corner of the formal garden. Directly in front of the entrance, there was an informal sitting area and a small pond. 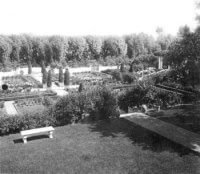