Book Club takes place 4:00-5:00pm the second Tuesday of each month. Join us for a lively discussion over cheese, crackers and wine. 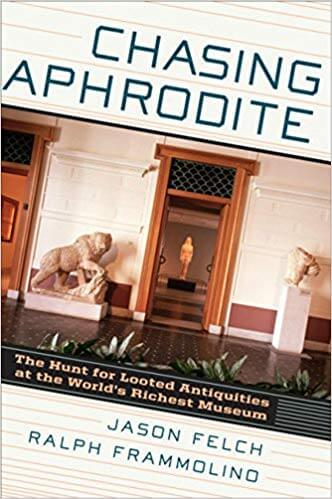 In recent years, several of America’s leading art museums have voluntarily given up their finest pieces of classical art to the governments of Italy and Greece. The monetary value is estimated at over half a billion dollars. Why would they be moved to such unheard-of generosity?

The answer lies at the Getty, one of the world’s richest and most troubled museums, and scandalous revelations that it had been buying looted antiquities for decades. Drawing on a trove of confidential museum records and frank interviews, Felch and Frammolino give us a fly-on-the-wall account of the inner workings of a world-class museum and tell the story of the Getty’s dealings in the illegal antiquities trade. The outlandish characters and bad behavior could come straight from the pages of a thriller—the wealthy recluse founder, the cagey Italian art investigator, the playboy curator, the narcissist CEO—but their chilling effects on the rest of the art world have been all too real, as the authors show in novelistic detail.

Fast-paced and compelling, Chasing Aphrodite exposes the layer of dirt beneath the polished façade of the museum business.