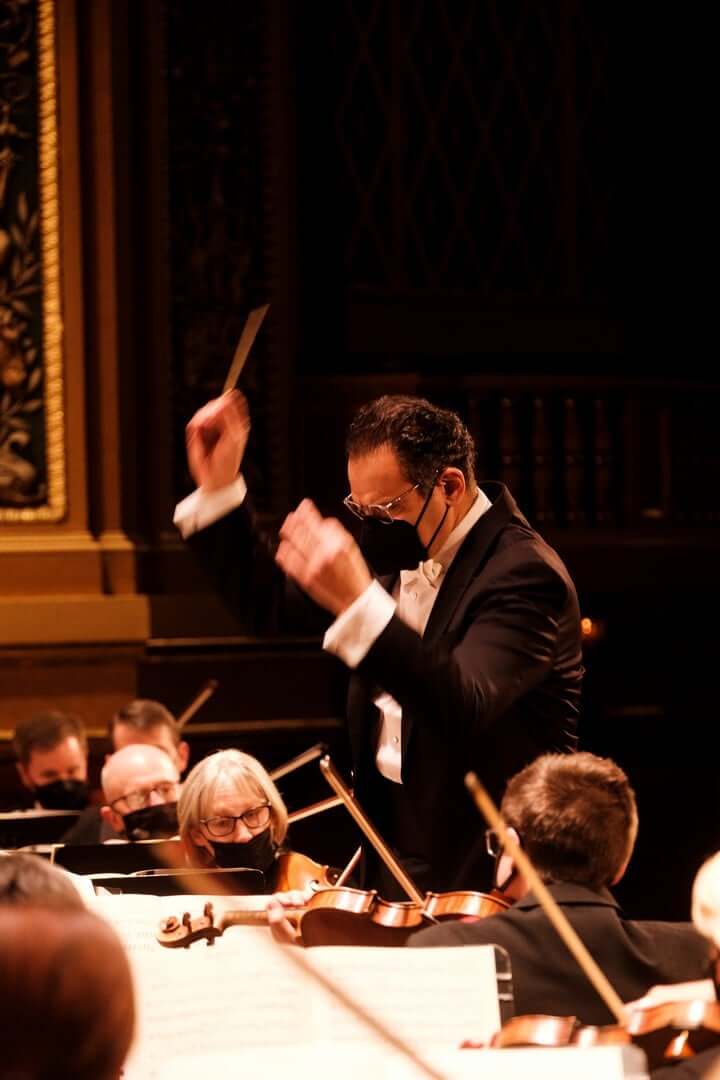 The SBSO Premiere Concert was 10 days ago, but sometimes we need a little time to let thought matriculate in daily experience. Maestro Fouad Fakhouri wrote an original composition that premiered at the Temple Theatre on January 29th, 2022. The performance included a relatively modern piece from composer Aram Khachaturian as well as a composition from Cesar Franck.

As one of the acting editors for Eye on the Arts I wear many hats and also help to produce these symphonies. I work along side the symphony throughout the week, including several rehearsals. I was able to hear the bombast of the Krupa piece in repetition. During rehearsal Maestro asked for nuances like, “horns to play a part again, but this time quieter.” I am always enamored with his time keeping techniques, the way he conducts with one hand and keeps tempo with a gentle word of “bop bop bop bop.” This behind the scenes look at the symphony has given me so much insight into the pieces.

As a classical music enjoyer, I find I almost always gravitate towards contemporary works. And of course, with this Krupa piece being brand new, it was no different. I love works from Yann Tiersen and Philip Glass. John Cage and members of Black Mountain College are nearly sainted in my worldview. As classical music somewhat falls out of favor in public listening habits, it continues to grow in the film and tv industry. Many would-be listeners get caught up in film soundtracks, without realizing how lovely it is to sit in a theatre and hear the drama unfold, right in front of you.

For me, the premiere of Krupa, was like being present for a show by Danny Elfman. It was bombastic and loud. All over the place and ever present. Yet controlled and methodical. The emotion was fun and adventurous. A ride. I sat backstage as the show opened and the hot lights washed over the many humans with their long tailed tuxedos. I was transported. Taken for a ride, through a cartoon of my life. Great music stops time, or lets the listener feel time. It cuts a slit in reality and invites you through it. The bold piece by Conductor Fakhouri allowed a less experienced listener such as myself, an entry into a place I have not been. A place where drums rock-n-roll and tumble through “classical” music. A new way to see how history unfolds into the now.

The second piece in the first act was equally amazing. The Kachaturian piece debuted in 1940 and is relatively modern by many standards. The piece was broken into three sections. It picks up in rocking form the way Krupa left off. The second portion made way for a more lyrical composition. This piece moved me in a direction almost the opposite of Fouad’s original piece. It was quiet and melancholic. The piece brooded and sounded like a cold winter. But it also felt easy and improvised. The violin solo was soothing and sad, but in a comfortable way.

After intermission, the second act was lovely. I ate some shrimp and cocktail sauce that I brought along with me. It was sweet and delicious. The car acts like a refrigerator in frigid weather. Everyone I ran into was kind and pleasant and the great world continued to spin. The rollicking evening began, subdued into strings and put itself away in the cabinets or returned to the grid. The next symphony performance is on April 2nd. It features actors and a semi staged performance. It is based on the perspective of Salieri (a fictionalized rivalry) who was Jealous of one Wolfgang Amadeus Mozart. We are all looking forward to this. Who can look away in the face of dynamite?