A Shot In The Dark Hits Its Mark

Venue: Midland Center For The Arts 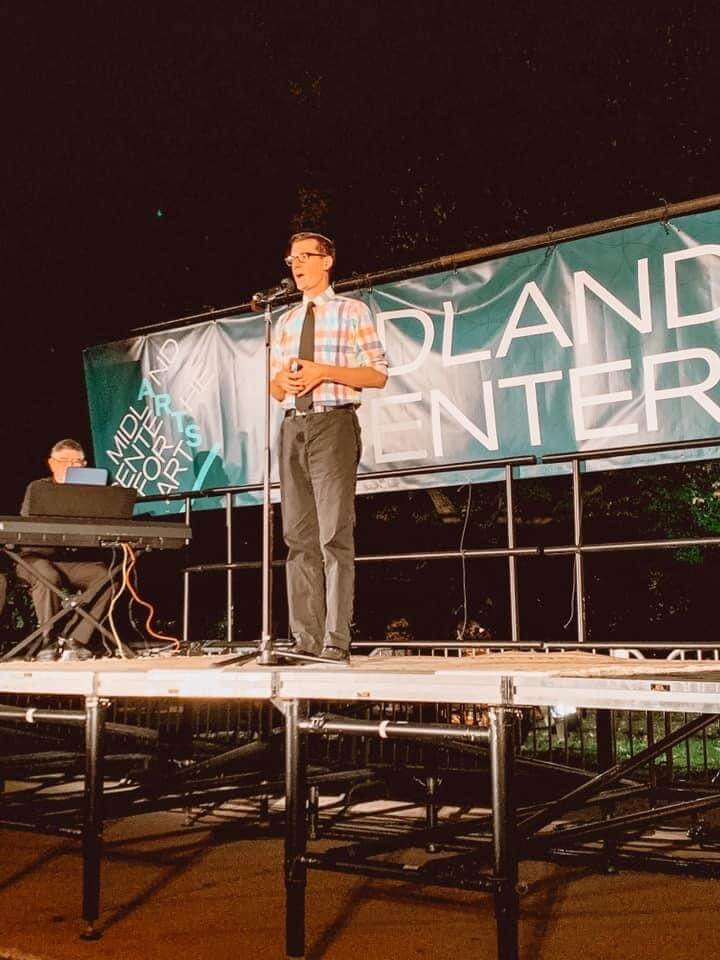 Everything these days feels half-assed, doesn’t it? We can look at people but can’t hug them; we can see our friends but only from a distance; we can watch a theatrical show but only on a screen. I’m so tired of looking at people on screens, I just can’t be bothered to try to be entertained that way anymore. I’m over it.

Well, last night the show came off the screen and back onto the stage where it belongs, and whatever measures we had to take to get it there, it was worth it.

As night descended over the parking lot at Midland’s Center for the Arts Cabaret Under the Stars, talented singers took the stage and like-minded theatre patrons sat gathered in the dark to experience something together … while slightly apart. There were Broadway ballads and torch songs, rousing anthems, comedic stand-alones, enjoyable standards, and one perfectly original piece capped off the big finish. The 17 voices who sang them were sturdy and sweet and achingly familiar from seeing them on stages throughout the region in the past … when things were normal. It was a sold out socially-distanced show, and while it all could have felt so wrong with everything that had to be altered just to allow for the experience, instead it felt just right.

Safety measures were in evidence everywhere, as microphones were traded out with each singer, tables were spaced widely apart, and performers were masked as they entered and exited the stage, only removing their masks to sing.

A few songs were just songs, but most were ENTERTAINMENT, as big and joyful as entertainment gets.

Anastasia Breen was a hit right out of the gate with “Not for the Life of Me” from Thoroughly Modern Millie. Other stand-outs throughout the evening included Carol Rumba’s “Where Did I Go Wrong?” (It Shoulda Been You), April Millward’s “Meadowlark” (The Bakers Wife), and Emma Massey’s “It’s a Quiet Thing” (Flora The Red Menace).  Adam Gardner-Northrop’s “The Plane” (by Ryan Scott Oliver) was disarmingly funny; Erica Tatum’s & Dave Ryan’s “Party Hat” (by Joe Ioconis) offered outstanding kazoo solos and unexpected tenderness; Meagan Eager’s perfectly executed “Too Pretty” (by Katie Thompson) felt like a comedic conversation meant just for me (as she was previously employed as a server at my previously-restaurant).

The most poignant song of the evening was Ryan Sequin’s “Out There (Hunchback of Notre Dame):

“Out there among the millers and the weavers and their wives

Through the roofs and gables I can see them

Heedless of the gift it is to be them

If I was in their skin

A song about the simple joy of going about our daily life unimpeded, and our utter failure to recognize and appreciate ordinary routine until we are separated from it and each other. What a song for our time.

With her own take on the sign of our times, Ann Russell-Lutenske wrapped up the evening’s entertainment with her hilarious self-made showstopper, Ode to March:

“The lockdown has been lifted

It was a sold out show in bit of an altered reality. Singers performed alone at their microphone and distant from the piano (the only duet of the evening was two people who quarantine together). But it worked … this felt as right as anything has these past 7 months. With a perfect half moon above them, backed by local music legend Jim Hohmeyer and emcee’d by our charming host Dexter Brigham, these singers brought their best and reminded us what it’s like to experience something real, together. Thank you to the Midland Center for the Arts for doing what it takes to get these performers back on stage and for making a space for us to be an audience … back where we belong.