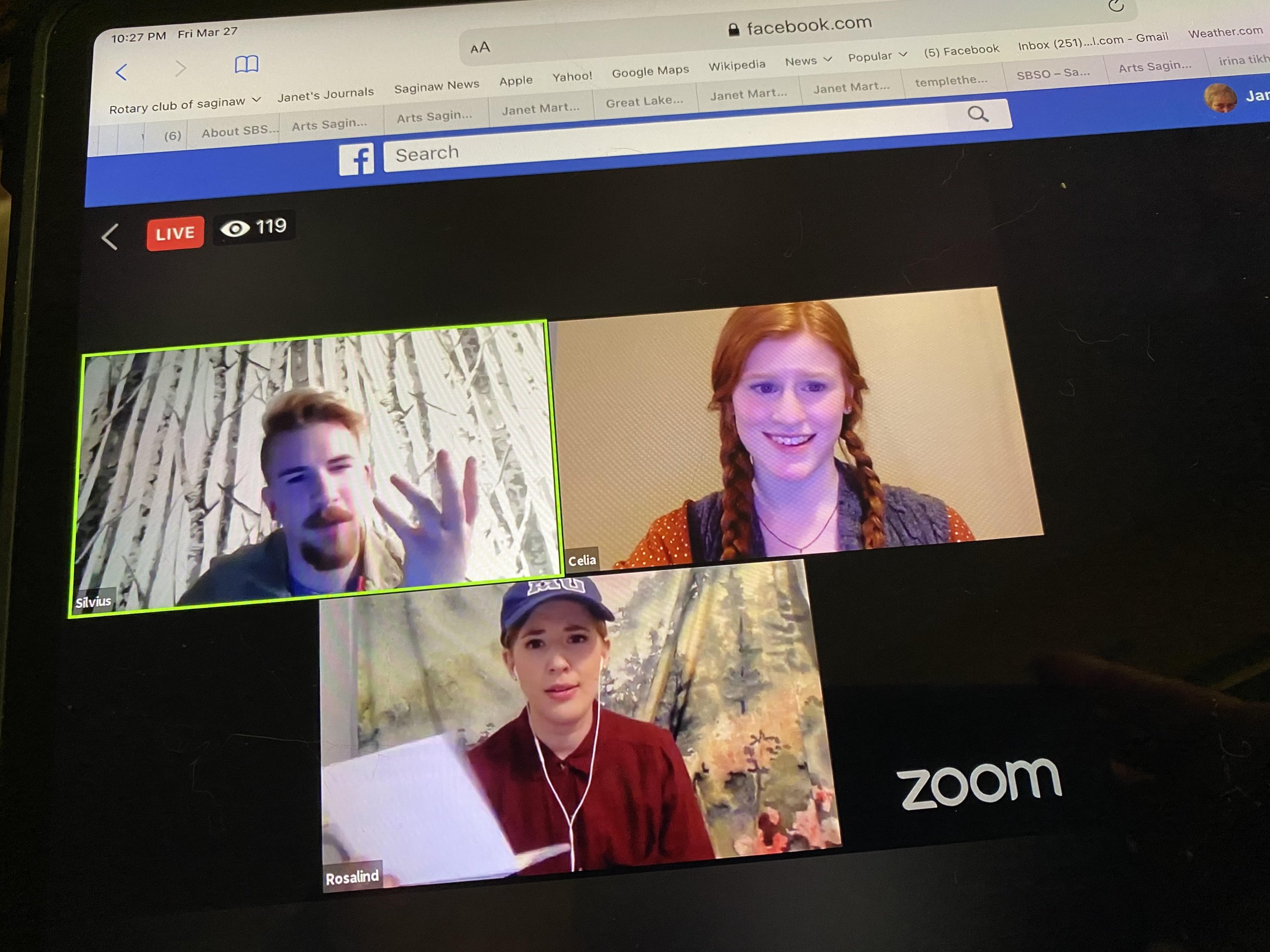 Twenty actors and one narrator, each in their own home, performing an abbreviated Shakespeare comedy LIVE, with the reviewer in her living room mouth wide open in astonishment.  One of the actors letting lose with a cuss work when he flubbed a line. Legions of listeners cheering them on with a streaming collection of written comments.

That’s what happened Friday night, March 27, in a  performance of “As You Like It,” hosted by the Midland Center for the Arts on its Facebook page (go to their Facebook  to watch the performance; use the 9:04pm one).

The idea was cooked up by the center’s programming committee team. Dexter Brigham, the managing director at the center,  briefly rehearsed online the cast, who hailed from  Saginaw, Midland and Bay City. Jason Applegate, a theater teacher at the Saginaw Arts and Sciences Academy, pared down the script. And IT guru Stephen Fort put the Zoom app, usually used for conferencing, to a test in doing a complicated live play.

After a glitch getting in the way immediately, a second attempt began and for nearly two hours a small town in Michigan totally rocked Shakespeare on Facebook live. One can only wonder what The Bard would’ve thought of this.

“It wasn’t terribly difficult to pull off,”  says Brigham of the use of the  Zoom app, “but it did require Stephen  Fort to be a dedicated tech guy, making sure  the actors all made their ‘entrances’ and ‘exits,’ and when to mute and unmute their audio and video.”

What became immediately obvious to this reviewer is the actors were in totally uncharted territory and survived numerous challenges.

Normally in a theater production they are all on stage and can readily react to each other. In this case they were apart in their own homes sight unseen. Some were clearly comfortable with that, reacting to unseen cast members. Some were not sure where to look or were stone faced.

Normally they are provided with a costume designer, a set designer, a props gatherer,  a lighting designer and a makeup/hair designer. In this case they were left to create on their own all those factors. Some were wonderfully and often hilariously creative. One even had a costume change or maybe three. Others were Plain Jane.

Normally they don’t have to deal with anything like a camera. In this case they had to handle their  own camera work with a smartphone while trying to act.

Rachel Weinfeld as Rosalind and Lily Somers as Celia,  the two main female leads, were absolutely brilliant. Cool, calm and collected …their eyes not detecting looking at a script, lots  of expressions and reacting,  costume change for Weinfeld.

“As You Like It” takes place in the woods. Besides Weinfeld’s drop cloth nature background  Nick Alfano as Silvius had a trees back drop cloth. And Madeline Lynch as Audrey was backed up by 10 or more live houseplants plants behind her. Strong performances by both of them too.

Isaac Haviland as Charles the wrestler nearly stole the show guzzling beer and looking tough. Andy Harrington played guitar in his role. Katie MacLean-Peters as a Duke Senior, Ann Russell-Lutenske as Le Beau, Mary Ann Tessin as Corin and Gina Kearly as Touchstone nailed it with their costumes and make up along with strong acting.

In one scene two of the characters exchange a necklace. And it really looked  like they had passed it between them,  as if they were seated next to each other. Even though it was a different necklace, it worked.

Nice work too by narrator Kate Fort who advanced the action seamlessly.

Throughout little transmissions burped and belched, possibly more of the fault of Facebook’s overloaded system. And that ever present time lag between the mouth and what the ears are hearing.

As the show continued most of the uncomfortable ones settled in more comfortably. We are not going to criticize any of them because to accomplish something you have never done before is impressive into itself.

That’s why we decided to document it….to show the world virus be damned.

Says Brigham, “Yep. It’s a very different creative approach when everyone has to costume themselves and create a backdrop and props from their own homes. We had a blast doing it. There’s no expectations as to what it needs to be, so it could be anything. We could take risks and see what happened. I’m very happy with how it turned out!”

So give it a look at the link posted at the top.