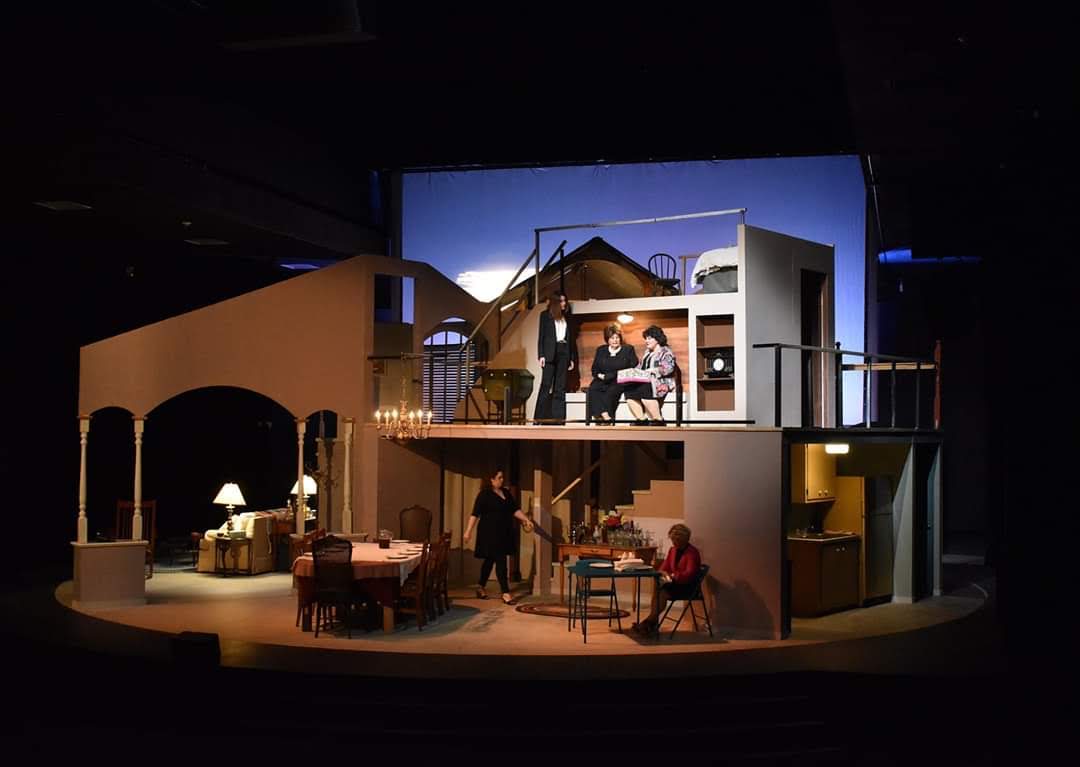 Despite its absolutely incredible acting and taut direction, the star of the Midland Center for the Arts production of “August: Orange County” is its detailed set designed by Evan Lewis.

Never ever seen anything quite like it. And difficult to describe. Utilizing fully, the rotating stage in the little theater, it contains three stories featuring six rooms and the porch of a country Oklahoma home.

As it rotates from scene to scene, the actors walk through it — creating a continuous flow of  action. And best of all, while action is focusing on one of those seven spaces often other cast members are viewed going about their business above or below or beside the focused scene. Sometimes their characters are aware of what is going on in the focusing scene and sometimes not. If you get the picture.

Adding to the versatile set is outstanding lighting of it, designed by Marie Andrews. Always directing the eyes where they need to be.

But make no mistake about it, the acting is outstanding in this Pulitzer-winning comedic play about an extremely dysfunctional family coping with the death of its patriarch. Yes, comedic. Script writer Tracy Letts is phenomenal with its words and director Adam Gardner-Northrop masterful in directing his cast with every nuance possible.

One second the audience is laughing loudly and then in a flash falls silent silent silent as another dysfunction presents itself.

In one marvelous scene involving a frying pan applied to a human, the applause for that action is sustained as the audience reacts.

And the physical battle that ensues during the funeral dinner and into the living room is another audience – and reviewer –  favorite.

Listening to the audience react in this play is part of the fun.

All 13 cast members cast are incredible and space does not permit us to list every single performance and its dynamics.

What we have here is drug-addicted and tart-tongued family matriarch Susie Polito and her three daughters Megan Applegate,  Ashley Potts and Trena Winans. Cast as the significant others of the three daughters are Andy Harrington and  Dan Kettler. Ann Russell-Lutenske is the sister of the matriarch and Kurt Miller her husband.

Children of the above mentioned are Anna Stolz and Chad William Baker. Kelley Gray is the town police chief and Gina Kearly the newly hired maid. And William Campbell  is the quickly departed patriarch.

Polito and Applegate are standouts as they lock horns with each progressing moment of the play, as more and more family dysfunctions present themselves.

Polito when she is drug fueled slurs her words, is addled and makes absolutely no sense, and when she locks her radar on someone she belittles them totally. Yet for as awful as she is, there’s also something charming about her. What a performance.

Applegate in the beginning is almost a mouse but with each increasing minute gets meaner and meaner, more and more like her mother. When they lock horns viewers are riveted.

Miller is a delight as the harangued husband with compassion and a sense of humor. And with few spoken words and her

reactions delightful is Kearly as the maid who silently goes about her business as all rages around her.

Often the cast members are talking over each other, which is another delight of the play and makes it seem like it is a really happening because that’s how people talk. And as dysfunctional as many of them are we, well, like them …. except for one. Again, great direction and acting.

“Osage” completes a five-year cornerstone series exploring  family dynamics through five iconic pillars of theater — “Cat on a Hot Tin Roof,” “Oedipus the King,” “A Long Day’s Journey Into Night” and “The Cherry Orchard”  the other four. It has been a wonderful ride.