Bio-Dome: Just Because We’re Stuck In A Bubble, Doesn’t Mean We Can’t Cause Any Trouble

Venue: Live from the Quar 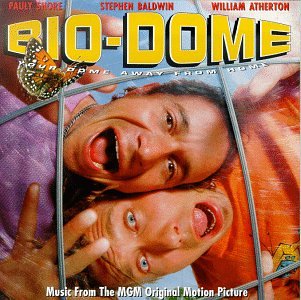 Rotten Tomatoes gives the 1996 Opus Bio-Dome a 4% rating. This is the primary description under Bio Dome on the rating website: “Like its two obnoxious protagonists, this dreadfully unfunny Pauly Shore vehicle should remain separated from society.”

Metacritic gives this movie a 1 out of 100. Bio-Dome is one of only 10 films to receive this distinction. But perhaps everyone should reassess this classic quarantine film, given the circumstances.

Much like Peter Stack’s 100 rating of Dumb and Dumber in 1995, I would like to position Bio-Dome as the same caliber of film. A great film in being just what it is, dumb as heck. And very funny. Which equates to: fun. FUN. Art is supposed to produce feelings and this movie produces a feeling of fun. It lingers in memory, like the face of death in The Seventh Seal or the red dot that is Hal in 2001, or Tom Hanks in a suit sitting on a park bench. Two colorful stoners, drinking fountain soda and destroying everything. When I reflect on the film, it sits just the same way in my mind as any great film.

This is what google says about the film: Bud (Pauly Shore) and Doyle (Stephen Baldwin) get simultaneously dumped by their eco-conscious girlfriends, Monique (Joey Lauren Adams) and Jen (Teresa Hill), in the middle of the desert. Needing a bathroom, the two friends enter what they think is a mall but soon realize is a high-profile, secure biological experiment. As they engage in a year-long battle with Dr. Faulkner (William Atherton) and the other scientists, Bud and Doyle are forced to confront the recklessness of their behavior.

The 90s were the beginning of ‘woke’ culture. The country was getting introduced on a mass scale to those things that had been undercurrents in society for a long time: tofu, yoga, environmentalism, copious weed smoking All that we generally equate to 1960s counterculture became a forefront in the culture of the 90s. Flash 30 years forward to today and we have legalized weed, your mom does yoga and I just cooked some tofu for breakfast. The environment is getting its first break since the industrial revolution thanks to this pandemic. Bio-Dome is ahead of its time in these respects. Pauly Shore being California incarnate and California being an epicenter in which most movements begin and make their way east.

I love a dumb comedy. 1979’s The Jerk is one of my favorite movies. Animal House, Caddy Shack, the late 70s comedies that took the genre in a new direction are the classics that have brought us more niche dumb comedy like Bio-Dome. Bio-Dome which is now almost 25 years old and in it’s own right has become a classic.

The 80s gave us Chevy Chase and Vacation, we got plenty from Mel Brooks in the 70s, 80s and 90s, along with Harold Remis and the list goes on and on. We also received John Hughes in the 80s. Who made classic films, but they twisted and deviated from the pure comedy standard. Comedy for comedies sake. Nothing didactic or aphoristic involved here.  That’s what we came here for, pure stupidity. Give it to me.

Insert Pauly Shore in the 90s. A man born in a comedy club. His parents worked in Comedy his whole life. He was mentored by the comedy legend Sam Kinnison. The 90s expanded on the 70s formats of sitcoms with catchphrases, but added a new rough edge to it. Fox had picked up where National Lampoons left off. The 90s SNL line up is certainly one of the more revered. And to top it all off, we had Pauly Shore, The Weasel himself at the top of his game. This is lifted from Pauly Shore’s wiki page: “The Weasel” involved Shore speaking in a surfer parlance, heavily peppered with dudespeak slang such as “edged”, “melons” and “grinding” as well as his catchphrase, “Hey, BU-DDY.”

Bio Dome has 5 writing credits. This is a testament to what it takes to write lines like “Did you know there is a rainforest in here?” (Doyle talking to a hot scientist in the Bio-Dome) and a scene where they shave a dog for no reason. In fact, the writing was so natural I didn’t expect to see a writing credit at all! I figured they just turned the camera on and let Pauly Shore go wild. He had success with the classic, Encino Man and a great but a bit inferior movie, Son In Law. So by 1996 I figured they were just letting him go wild with his slapstick version of a California surfer dude.

Some scenes are beautiful. If we froze the frame at the two dejected, sitting by their car with a boot and all the parking tickets and we held that frame up next to a revered Wes Anderson shot, we would see many commonalities. The characters in this comedy are perfectly exaggerated.  Joey Lauren Adams environmentalist hippie babe is funny and compelling. And well actually, Stephen Baldwin is not. Matter of fact a few scenes in the beginning of the film, he is down right cringey and not funny at all. But it works in this movie. HIs terrible hair-do and the fact that he’s doing his best Pauly Shore impersonation (which isn’t great) two feet away from the man himself are part of the fun.

Jim Carrey ruled 90s comedy. His physical comedy alone still hails as the all time best today. But Pauly is more like the common man. You know that dude. He’s kinda funny. Clever sometimes, very endearing and quite dumb. Physical comedy, yah sure, kinda, if you like a fart joke or yoga. But it’s just this that makes it relaxed and real and fun. I’d like to hang out with 90s Pauly Shore. Matter of fact when I was 11, I acted like him. And I still kinda do bud-dy.

And finally the costumes. From the villains scarf, to the girlfriends skirts and Doyle’s hair, the film is a vision. The Bio-Dome itself is a wonderful set. This is a  movie about the plants in the mall in the 90s. The plants that made it feel like a jungle. The movie ages well. The over the top characters and writing and set and costume are all one giant Big Gulp. All of it adds up to a convenience store fever dream.

A lot of my favorite films have a serious streak in them, but balance it with fun. Holy Mountain, The Florida Project, All That Jazz. I love plotless art films (current favorite being Kaili Blues), films that are more focused on producing a feeling than they are a meaning. That aren’t hitting you over the head with some sort of message.

Bud: We have to show the girls that we care about the environment, too.

Message here? It’s not as shallow as it seems. The characters are seemingly just trying to get the girls (they do turn a new leaf and do the right thing for the environment) – but it’s just about two stupid idiots, doing stupid stuff because they have stupid beliefs. And in its quest for the joke and the laugh, that is where it is rich and deep.

If you want a stupid movie, grab one that’s 4% on a stupid rating site and 100 in my stupid quarantined heart.