Black Violin in Midland Over the Weekend 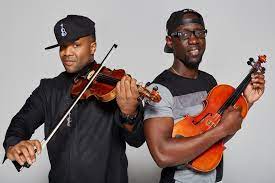 The group is part of the 50+ Celebration Season of the Midland Center for the Arts. They performed Saturday, October 23, 2021, bringing their “Impossible Tour”, “where everything is possible” and promoting their newest album, ‘’Take the Stairs”.

Their style is a unique blend of classical and hip-hop music often described as “classical boom”. The music of Black Violin aims to overcome stereotypes and encourage people of all ages, races, and economic backgrounds to join and break down cultural barriers.

The group played for 90 minutes with no intermission. Some of the highlights were: “Dreamer” by Imagine Dragons, Ed Sheeran’s “Thinking out loud”, where Wil B played his viola like a guitar, and a crazy hip hop rendition of Vivaldi’s “Four Seasons, Spring (Part 1)”. They played a selection of improv, but Marcus called it “free stlyl’in”. The music is different at each venue, and he encouraged the audience to record it on their phones and put it out on their social platforms.

Kev Marcus explained that the two met in high school and that “In 2nd hour we were playing Beethoven and Mozart but in 3rd hour we were listening to Biggie and Tupac and we wanted to combine both worlds”. Marcus also encouraged youth by saying “This (violin) got us college scholarships, we’ve met famous people and has it has taken us around the world.” He said, “we do this because people said we couldn’t”.

Black Violin recently joined with Turnaround Arts to bring arts education to struggling schools in underserved communities. They have performed with Alicia Keys on the Billboard Music Awards. They have won the “Night at the Apollo” competition several times and have been on Billboard’s Top Artist charts in numerous categories. More recently they have composed music for the FOX Television show ‘Pitch’.

On a scale of one to five of my “How Do You Like Those Apples” rating, I would give it 4 apples because of the unique classical crossover talent of the performers.  There were a few technical problems when Will B was doing his solos. The concert was nothing that was expected!