Comedy & Tragedy Perfectly Collide in Train Wreck of a Show 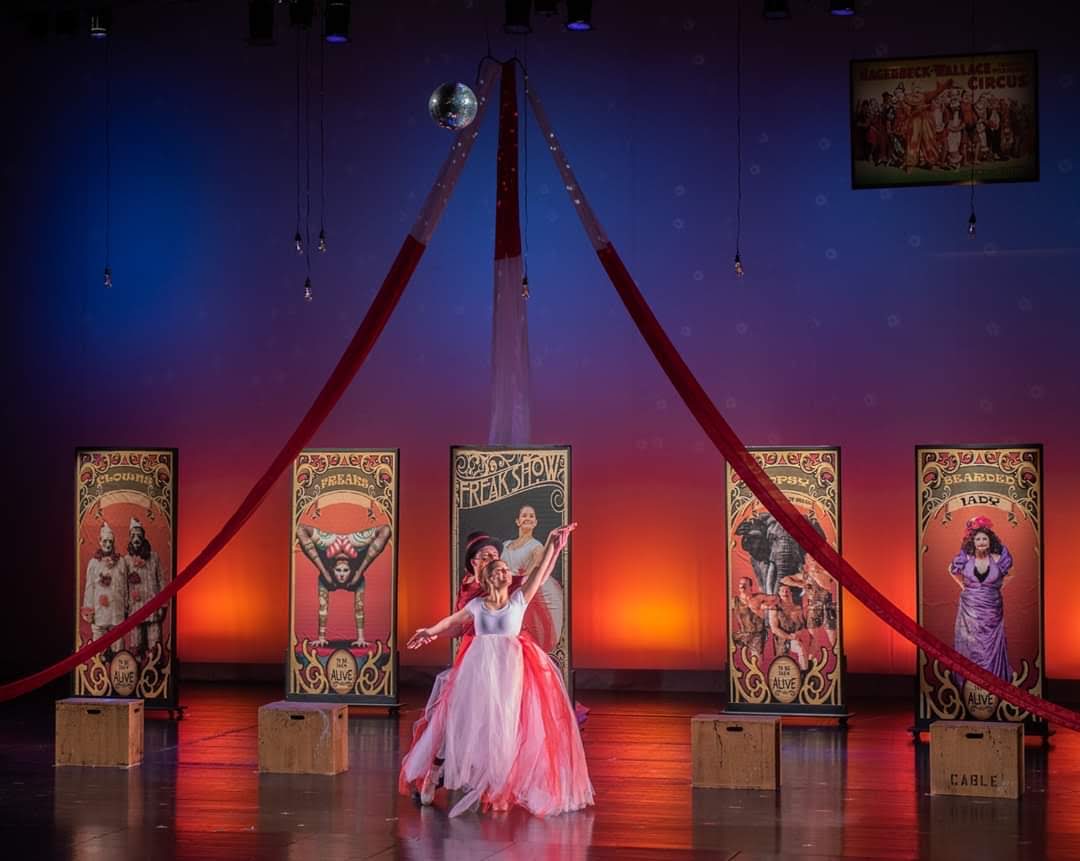 “Roustabout: The Great Circus Train Wreck” performs great feats of theatrical strength and daring-do …  somersaulting the audience from open-mouthed laughter to wide-eyed grief, without tipping them off or tripping over itself.

Ostensibly this show at Saginaw Valley State University is about a theater troop taking on a script about the circus train wreck of 1918, when the Hagenbeck-Wallace Circus train was decimated by a military train whose engineer was asleep at the switch (cue the underlying oft-referenced theme: War is bad … people get hurt).

In shades (pun intended) of  “Spoon River Anthology” and “Our Town,” the show partly serves as a speaker for the dead, giving names and stories to the unknown performers who occupy a mass grave in a Chicago cemetery.

But that’s just the surface layer. This show wears multiple hats and deftly switches them when you’re not looking (even though you ARE looking). It’s like watching a magic act: even though they tell us exactly what they’re going to do, we still can’t see how they do it and are left stunned at each rabbit out of the hat.

In a shouted “welcome aboard” speech, the Ringmaster yells advice and invective at the newly-minted-soon-to-be-dead roustabout, who is told he won’t even live to see his first show.

With that, we immediately find ourselves with one foot in the Now and one foot in the Then. The actors/improv troop/circus performers begin to navigate swiftly back and forth in time and place and it becomes quite a three-ring circus … metaphorically.

We are in a theater in the Now; we are on a circus train Then (which we are periodically reminded is not actually a circus train, because it’s Now, and we’re in a theater); and occasionally we are in some absurd third ring where Sade (via Kenny Rogers) is a kidnapped muse and spirit guide.

The metaphorical rings shift and meld and climb on top of one another. You’ve got to keep up and keep your heart open to the imagination, hilarity and solemn tragedy this show offers.

The script subtly references “Music Man” and “Macbeth,” employs the musical genius of Alanis Morrissette, Queen, Eurythmics, Sade, (plus a peppy little number about Soaking Carrots in Cyanide);  uses jazz hands as a sort of pixie dust, and gives birth – right there on stage – to world peace.

So much for the comical, the irreverent slapstick, the clowning (yes, there’s a clown, played beautifully low-key by Erica Close). But wait, there’s more.

The story of Unknown Female #35 (played by Holly Houck) is one woman’s desperate quest to be a freak (opposite a comically bearded “lady,” played by Lane Birchmeier).

Somehow this is reverently crafted into a personal but universal longing for connection and family. What could have been played as camp came off as impossibly beautiful and sincere. The sweet sincerity of that scene is one of the strangest things I’ve witnessed.

In another equally absurd and emotionally convoluted segment, we are rapidly pulled through a comical death, some sharp choreography with a song about cyanide, a heart-breaking elegy to the unrealized aspirations of an elephant, the tender damaged child inside a strong man (Unknown Male #33, played by Aaron Klama), and an audience’s voyeuristic penchant for risk and danger.

Thomas Edison also puts in an appearance here. The scene keeps somersaulting over itself, changing direction and adding emotional layers.

At several points I was laughing with actual tears running down my face, and at least once said right out loud “I’m so upset right now!” That’s just how it goes here.

This show is a gift that keeps on giving. The complex script by Jay Torrence borders on genius, the six actors (the above-named, plus Scott LaMont and Jared Kauffman) are up to the task of presenting multiple roles in this whirlwind of emotional content, and they are aided in the telling by the spot-on lighting by Jaden O’Berry, a fluid and functional set by Jerry Dennis, and sharp choreography by Peggy Mead-Finizio.

David Rzeszutek’s expert direction ties it all together and keeps the whole thing on track.