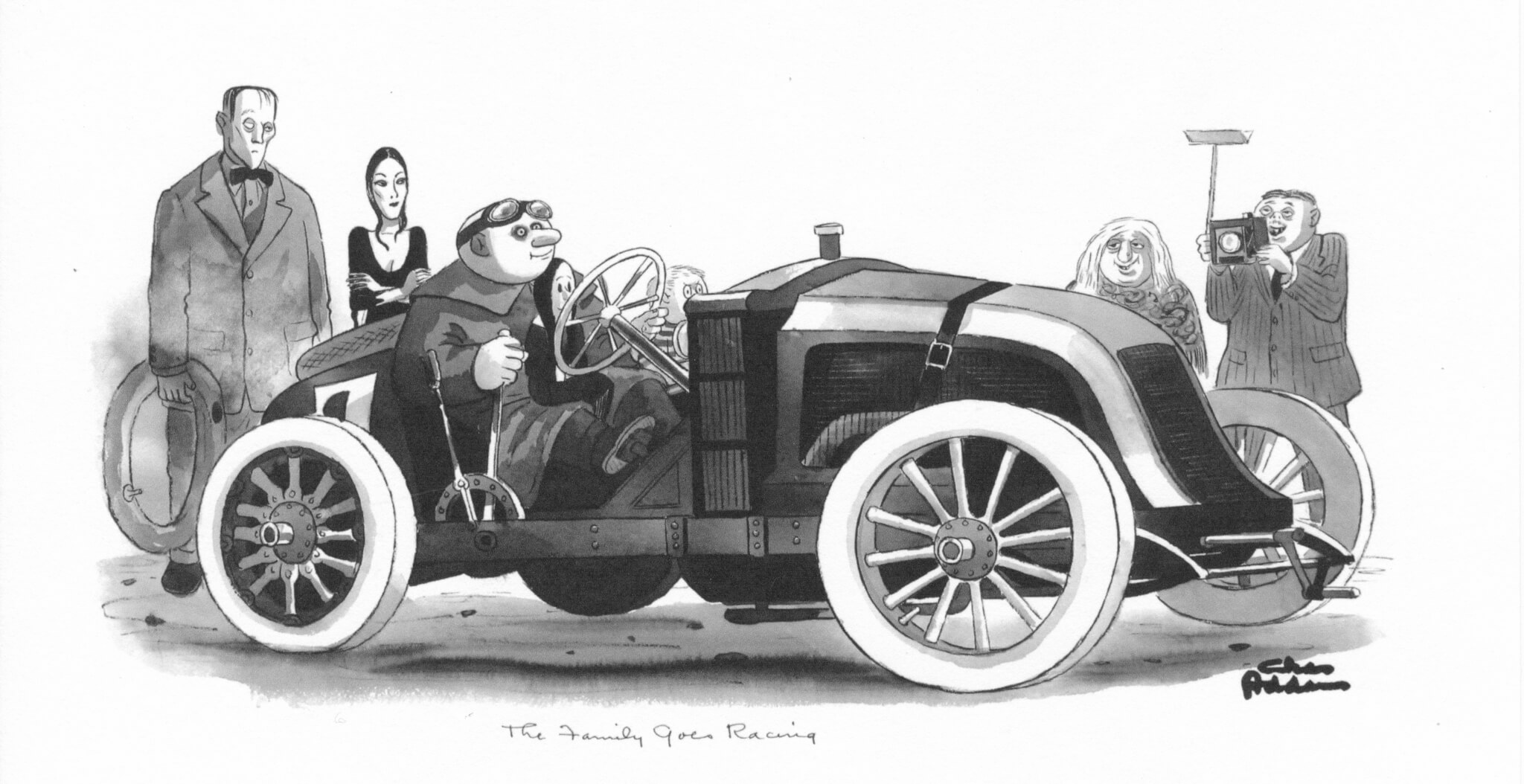 Just in time for Halloween, Saginaw Art Museum has opened an exhibition of works by Charles Addams, a cartoonist and illustrator best known as the creator of The Addams Family.

Although his Addams Family drawings comprise only a small portion of his life’s work (approximately 150 out of 2,500 works created during a career spanning more than five decades), the scope of their cultural influence is highly unusual, if not unprecedented, for an American cartoonist.

From the popular 1960s TV show, reprised in the 1990s movie franchise that earned Academy Award and Golden Globe nominations (among other awards), as well as video games, a children’s cartoon, and even a Broadway musical, The Addams Family is iconic and enduring in American culture.

Both in terms of visual style and thematic concerns, The Addams Family is, in a word, dark, but playfully, whimsically so. It is these qualities that give Addams’ work its power. The darkness fascinates us, and the whimsy provides access, invites and gives us permission to go there. Inside the Addams family home, we encounter the “mysterious and spooky” elements of our own interior, safe in our understanding that it is all, in the end, just harmless fun.

These qualities are exemplified by one characteristic work in the exhibition, in which Morticia and Pugsley Addams stand, with a frightened-looking repairman, in front of the opened basement door. Morticia drily provides directions to the fuse box while Pugsley stands by with a broad smile, his eyebrows furrowed in a exaggerated V—a comical expression of eager anticipation and harmful intent. The stairs descend into deep shadow, where a pair of ghostly eyes are seen, their slanted shape mirroring Pugsley’s expression. The overall effect is funny, but why?

In this piece and others, Addams holds up a dark mirror to the idyll of the American family, of American life. In his family, the children are not beautiful, innocent or kind, family pastimes are neither safe nor wholesome, violence and death are commonplace. Perhaps we find in these depictions, as they invert received cultural values and expectations, a kind of cathartic relief. Perhaps we find, exiled in that dark basement, a part of ourselves that sympathizes with the Family, with their dark impulses, and with their willingness—and their power—to act them out. But why overthink it? After all, it’s just a cartoon.

As such, Addams stands in a long tradition of artists who probe the shadowy depths of the American psyche, from Edgar Allan Poe whose macabre stories explore what he called “the imp of the perverse” to contemporaries like Alfred Hitchcock, with whom Addams was friends, and Ray Bradbury, with whom he collaborated, to artists who came after, like the illustrator Edward Gorey (whose work bears Addams’ unmistakable influence) and filmmaker David Lynch.

Visitors to Saginaw Art Museum’s Charles Addam’s exhibition—the first such exhibition of his work in the midwest—are in for a treat well-suited to the season. The 82 pieces on display, of which the Addams Family work comprises just one of six thematic sections, ably express the scope and breadth of Addams’ long and remarkable career. The show is family friendly, despite its darker themes—Addams’ work communicates on multiple levels at once, and parents and kids alike may enjoy an outing to the Museum as a Halloween treat. Spooky, yes, but all, in the end, just harmless fun.

Charles Addams: Friends and Family will be on display at Saginaw Art Museum through January 4, 2020. /exhibition/charles-addams-friends-and-family-addams-family-show/