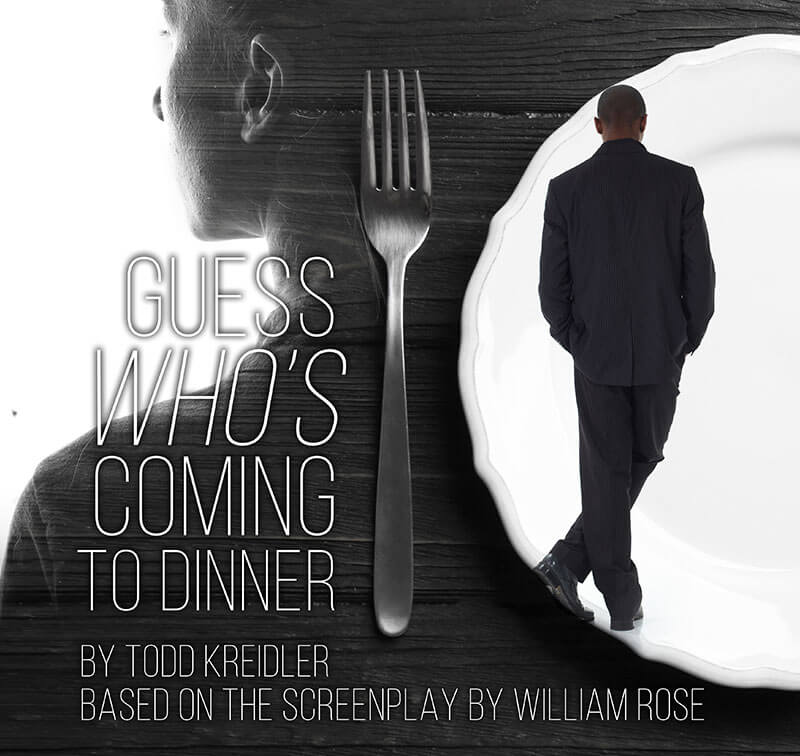 How do you prepare for love?  I am here to oppose you because the path you are on is a reckless one.  They’ll change the stinking world.  These are just some of the more memorable lines from Pit and Balcony’s most recent production, Guess Who’s Coming to Dinner.  The play, a regional premier, focuses on the relationship between Joanna Drayton and her new fiance’, Dr. John Prentice.  John is older than Joanna, a widower, and black.  The year is 1967 and a relationship between a white woman and a black man is not readily accepted, by anyone, including family.

Sharrieff Beamon and Angie Noah, are awesome in their portrayal of the young couple.  Angie is the naive, completely in love, Joanna.  She believes that the whole world will celebrate her and John’s relationship and will embrace it without question.  Sharrieff deftly plays the more realistic and reserved, John Prentice.  The couple lean on each other as they find their relationship attacked from both families and those closest to them.

Matt and Christina Drayton, played by Jeff List and Mary Spadafore, are loving parents who adore their daughter and are dismayed at her choice of life partner.  Their dismay stems not from a belief that Dr. Prentice is a bad person, but from a knowledge that a life choice like this will cause their daughter and her fiance’ great sadness, anguish, and potential harm, from a society that is not yet ready to embrace an interracial couple.  To add a greater burden , John has told them that if they do not agree to the marriage without reservations, he will not marry Joanna.

Lisa Ray and Nckolas Watford-Conrad, play Mary and John Prentice Sr., respectively.  They have seen the hate in this world first hand and they want to protect their son from it.  Mary also is concerned for her son, knowing how his heart was broken when he lost his first wife.  Is a new relationship with a white girl the best thing for him?  Prentice Sr. refuses to even consider that this new couple is anything but a disaster waiting to happen.  How can his son make such a stupid decision?  Beamon’s, Prentice Jr., rebukes his father by saying, “you still think of yourself as a colored man, but I think of myself as a man”.

The cast is rounded out with three additional characters; Matilda Binks, the Draytons’ maid, played by Danyelle Hillman, Hilary St. George, Mrs. Drayton’s assistant, played by Leslie Larkins, and Monsignor Ryan, played by Tim Maughtew.  These three characters offer support to the ideas and beliefs of the parents, this marriage is a mistake, nothing good can come of it, you are right in discouraging this relationship.

Each and every character plays off the other characters in such a realistic way.  You feel the concern that the parents have for their children.  You embrace the love that Joanna and John have for each other and their heartfelt hope that the world will accept them.  In the end, the final thought of the play, expressed by Matt Drayton to his daughter, Joanna, when she was younger, “the whole world needs a round table”.  We need to gather together, to see beyond our differences, to accept people for who they are instead of what they look like, to acknowledge that love can happen in any circumstance.