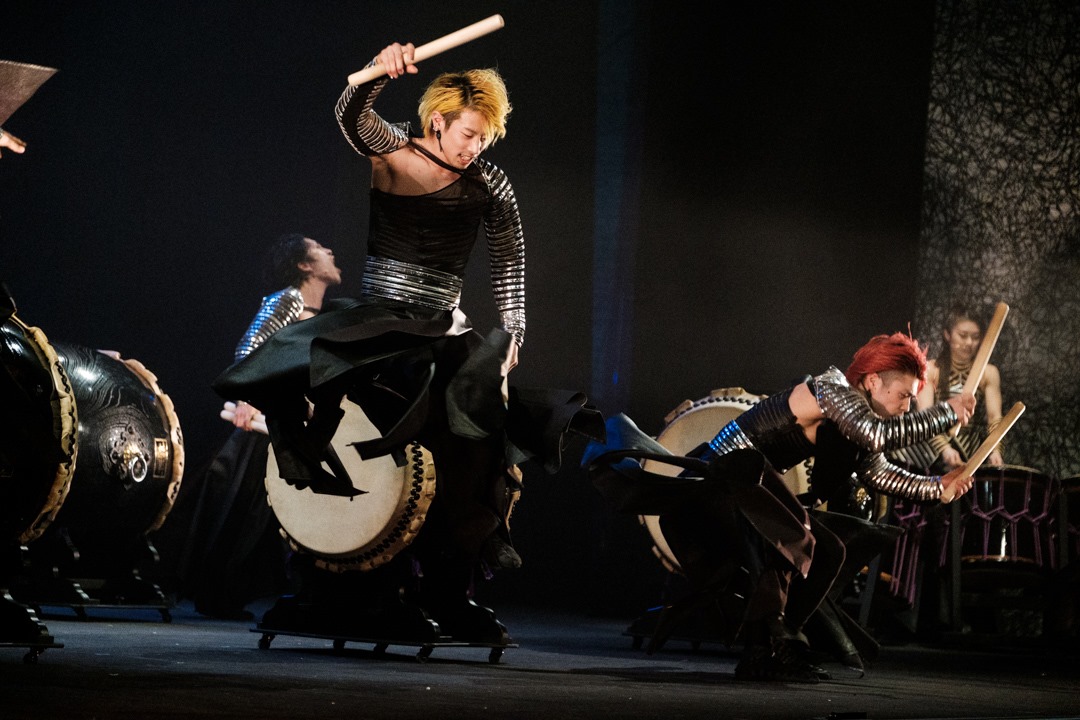 Just the two of them.

It helped that the flute was amplified. But still.

And this was but a small part of it all Sunday afternoon in Saginaw’s Temple Theater when the Drum Tao group from Japan took the stage.

Numbering around 12 male and female performers …and we never could get an accurate count because they moved around so rapidly… this was a show that will long live in the memory.

The men dressed in ankle length black skirts which swirled outward when they swirled around and around in dizzying fashion, while playing a drum. One drum so massive that when its performer climbed to the top of it and drummed from over above it he was halfway up into the ceiling of the theater. Drums on wheels. Dancers twirling long sticks that reminded one of the samurai. Drummers who had to lay prone, half way up of doing a sit up and holding that position while drumming furiously.

Various other instruments, like singing bowls, a gong and a horizontal harp, along with the Japanese flute and the numerous drum sizes.

Precision personified. Nonstop choreographic movements.  Fleeting images of the martial arts. Sometimes almost balletic. Athletic. Percussive obviously but never so loud  it hurt the ears, like many of the rock concerts do.

Its set like most of the costumes dark… not black but sort of a smoky black gray,  giving the sense of being in a dungeon or below ground where no sunlight reaches. Calming although it doesn’t seem like it would be.

One dance performed with umbrellas. Another with large colorful flags. One of the women pounding on one of the larger drums and  then the next moment fanning herself with a Japanese fan. A hilarious skit with a half dozen performers in blacklight costumes playing tricks with the eyes in the audience.

One drum hit with a drumstick as big as a bat baseball bat and harder than a batter would hit a ball. And small drumsticks creating a whisper quiet sound.

The blackness of the set and costumes interspersed with red and white.

And yet among all of this non-stop movement, pounding drums and athletic dancing there is a zen-like calmness in the show that takes you away from all the cares of the world as it encompasses your very being.

Drum Tao was formed in 1993 and currently has three groups performing around the world. It incorporates Korean, Maori and Indonesian influences as well as Japanese.

While some songs are traditional, most are modern compositions created by members of the troupe.

The strenuous physical demands of their performance style demands that all performers also train as athletes. Their daily workouts, which start at 5am and end at 10pm , include a 20 kilometer run, calisthenics, martial arts training, and hours of dance, drum and music practice.