At first it looks like business as usual – the Germanic facades of Riverplace Shops crowded for Memorial Day weekend. But for two days, strollers carry dogs more often than children. The hills are alive with the sound of barking. I am in the belly of the beast; I have arrived at Dog Bowl.

Past tables covered in deceptively human-food-looking doggie treats, I decide to take a gander at the disc competition. As a lifelong cat person among dog people, this is my only touchstone thanks to the Nintendo DS game, Nintendogs. Frantic years of my youth spent yanking a stylus across the touchscreen yelling SHEPPY – JUST LIKE AT HOME SHEPPY – COME ON! HE HAD IT! play out before my eyes as owners and their variously willing pups freestyle disc routines to music. Some of the dogs are serious competitors, and others are just happy to be here. A few run off, disc in mouth, with their owner in hot pursuit, fighting the clock. What is all this competition to a dog, anyway? The virtual dogs in Nintendogs whimper and feign sorrow when they mess up at the disc competition, but these pups hold their heads high. There’s nary a long face in the crowd – except for the [pause as I check dog breeds on Google] whippets.

After a few more disc routines, I peel away to eat a late lunch. When you’re vegan in mid-Michigan you expect limited options, but never fear, vegan Frankenmuth enjoyers: Pasty Haus and La Crepe Du Jour have you covered! Pasty Haus has a surprising variety of options to accommodate your dietary needs, including two fully vegan (and delicious) pasties. La Crepe Du Jour has a similar array of options, including a vegan batter that can be subbed into any of their non-vegan/vegetarian crepes. Both also offer many options for those without dietary restrictions, so there’s something for the whole family.
In one of my favorite performances, a border collie soars through the air as T-Pain sings the chorus from  Flo Rida’s 2007 hit, “Low.” You know the one – “Shawty had them apple bottom jeans (jeans) / Boots with the fur (with the fur)”. The event was free, people. Free! I didn’t expect to find such raw, unfiltered joy in a woman and her dog, moving carefree through frisbee-based choreography out in the summer sun. 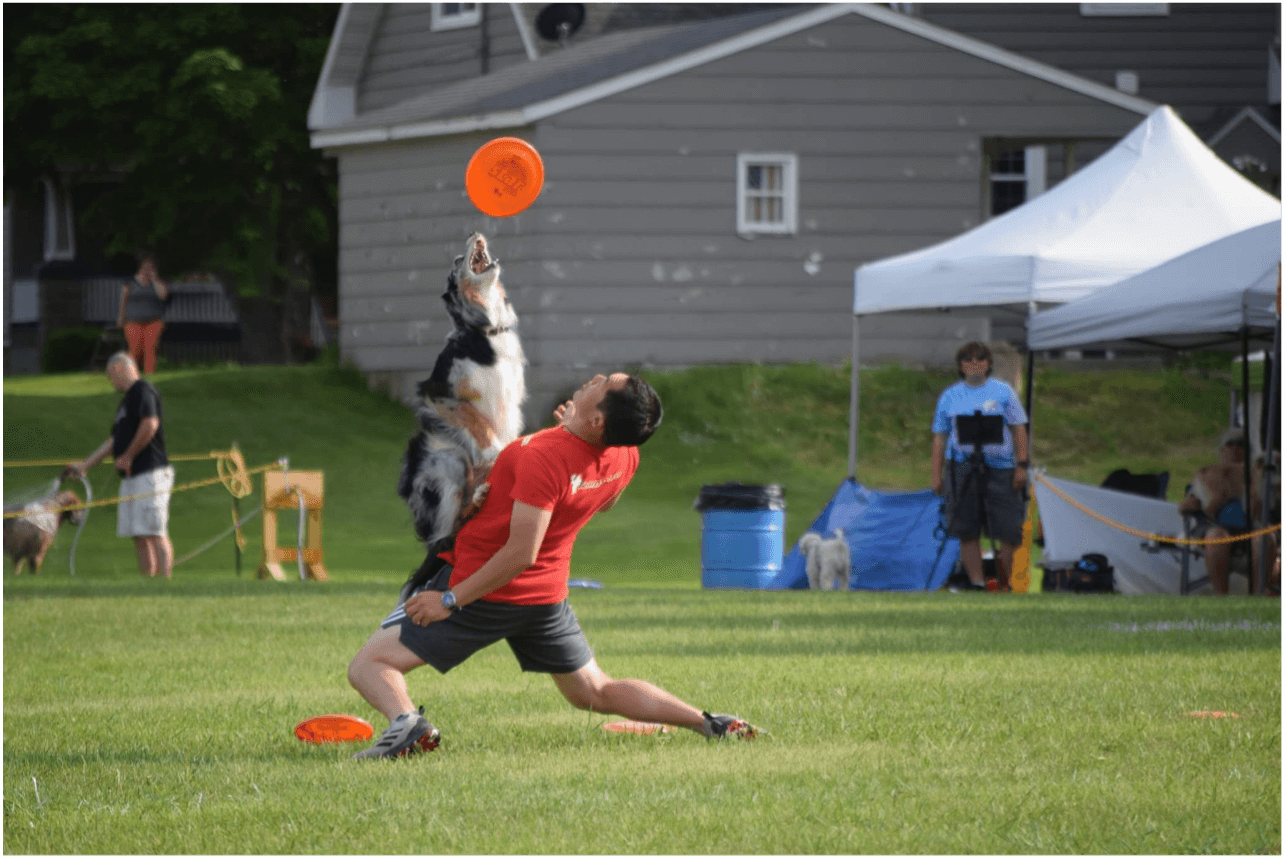 Pictured Above: Not the “Low” routine, but some disc dog action.
Photo Credit: Frankenmuth Dog Bowl 2022

One thing cat people and dog people have in common is that we’re pet people. Whether your beloved came with pedigree paperwork or a cardboard box, pet people of all kinds share an obsession with their animals that non-pet people might find disturbing. On Sunday, I meet a woman who’s had her poodle’s fur decorated with a crisp, hot pink cheetah print. 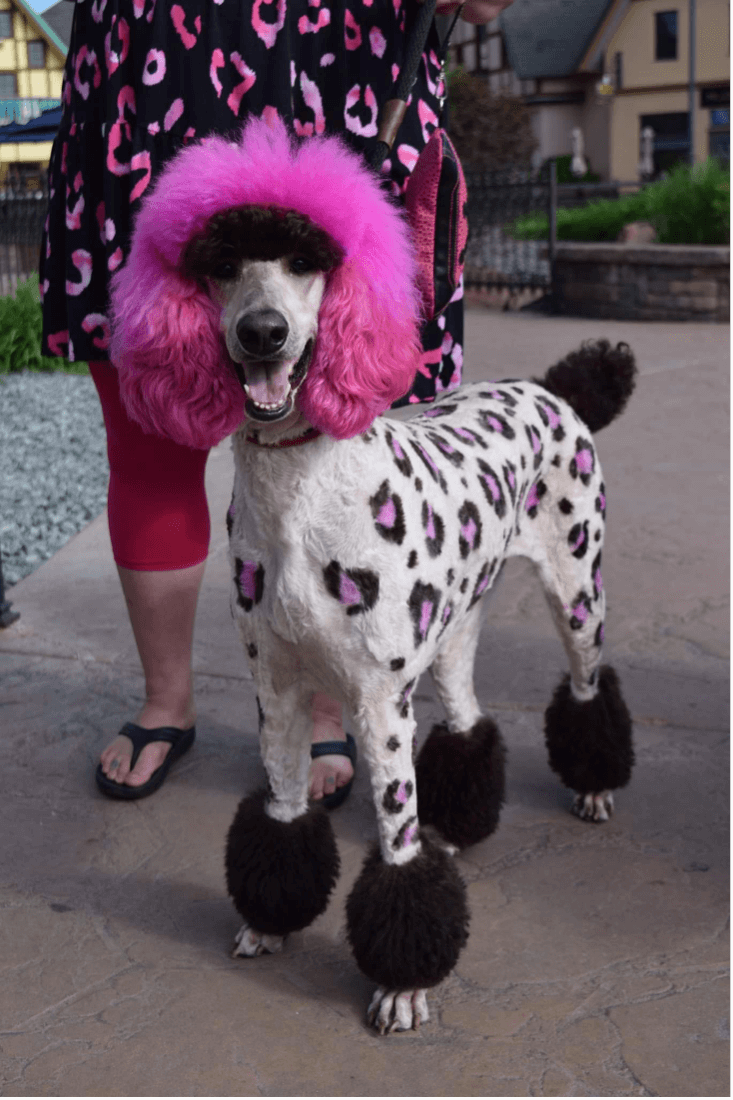 Her bedazzled glasses and matching outfit complement the poodle perfectly. I stop to tell her it’s the most impressive coordination of dog-owner fashion powers that I’ve seen all weekend, but she already knows. Who, but us pet people, could admire the lengths we’ll go to connect with our animals?

Some go beyond the veil, like Animal Communicator and Reiki Master Leslie, who can communicate psychically with animals of all sorts given only a photograph of the furry beloved (though she also does consultations for and with living animals). Banners at her booth read “I SPEAK TO ANIMALS!”, so I knew I wanted to stop by. Photos of Leslie with a bear, a cheetah, and other animals decorate the edge of her table. She talks openly and lovingly of her journey toward accepting her talent for communicating with animals, the time at a Grizzly Bear rescue sanctuary in Montana where she heard animal voices and saw animal thoughts for the first time since she was five years old, the countless owners comforted by her insights into the minds of their pets. Our chat is cut short when a new customer approaches, sniffing the large black Labrador plushie in front of Leslie’s booth before welcoming itself back for a conversation. (For more from Leslie, check out her website and Facebook page.)

Other highlights of my 2022 Dog Bowl experience:

I round out my time at the 2022 Dog Bowl with the wiener dog races, where a weenie named Bean pulls out a photo-finish win in the final round. I wouldn’t have it any other way. 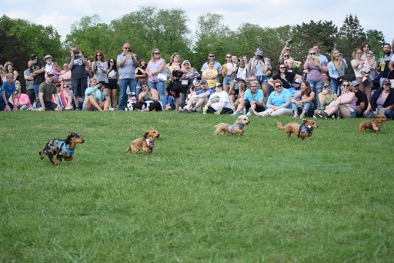 Pictured Above: Photo may or may not contain Sunday weenie winner, Bean. But look at them go!
Photo Credit: Frankenmuth Dog Bowl 2022

In a world that seems to grow colder and meaner every day, there’s no better place to find yourself than in a crowd full of dogs and the people who love them. Over the course of two days, I felt a dog-shaped hole growing in my heart. I remember this feeling as I walk past a litterbox, on carpets never once touched by doggie paws, to the cats that couldn’t be more indifferent about seeing me back home.While I would’ve appreciated more event schedules and maps on display throughout the Dog Bowl grounds, my wanderings let me see so many beautiful, happy pups. Serendipity is the word of the weekend. You can have a scheduled Dog Bowl experience, or you can just soak up the vibes. What begs to be seen at Dog Bowl – what it’s really all about – is dogs being dogs, and dog people loving them for it.