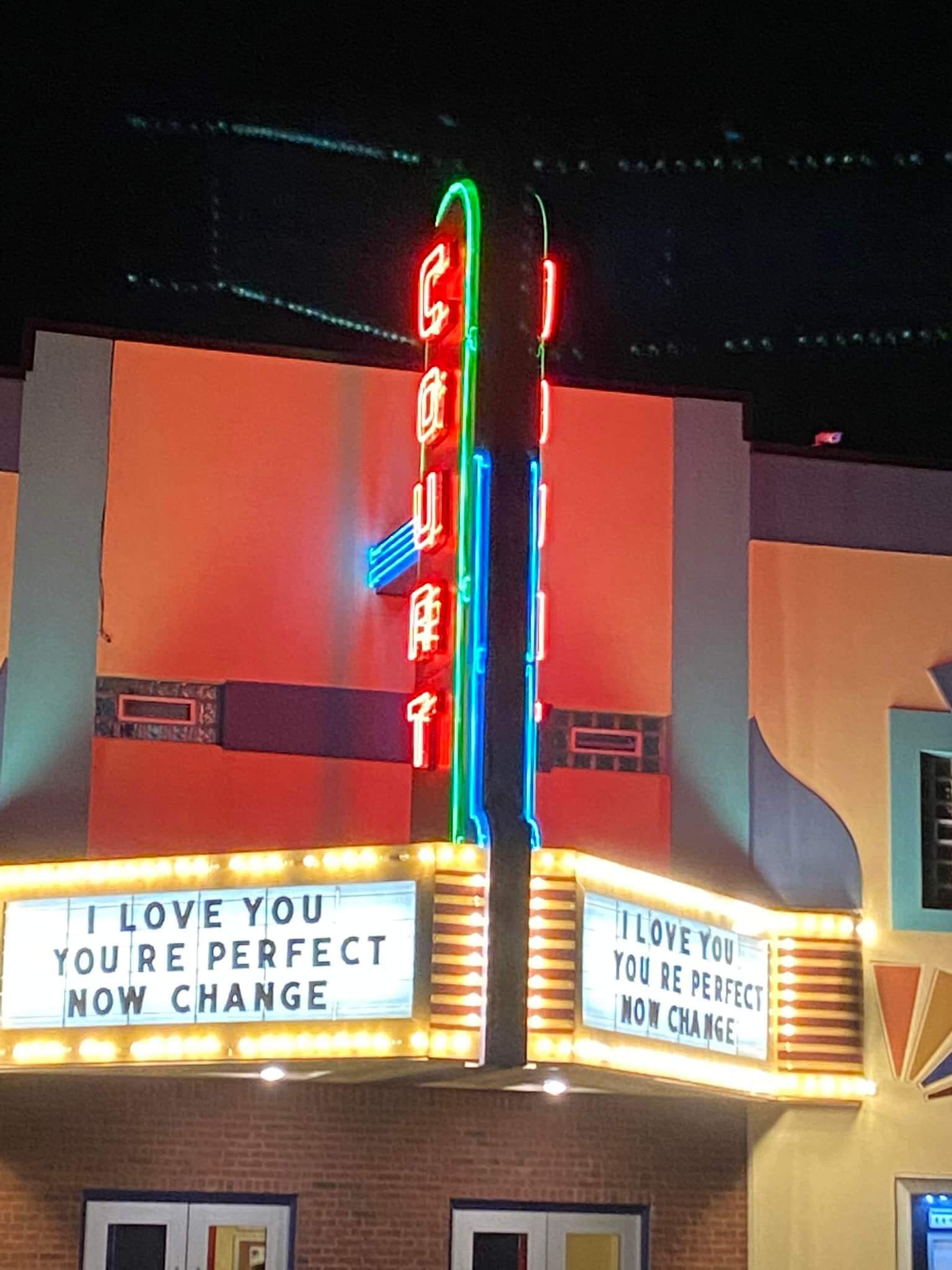 I Love You, You’re Perfect, Now Change is an off-broadway jukebox musical with two acts, 29 scenes, 54 distinct characters, and only four performers on the stage. Only someone with the theatrical talents of Ric Roberts could pull off directing such a challenging and involved show. Coupled with the musical talents of Kevin Cole, I Love You, You’re Perfect, Now Change was a performance for the ages.

There are four aspects of this production at the Court Street Theatre that stood out to me. The first comes from the audience itself, which was a mix of adult men and women and elderly members of the community. There was this appreciation for the jokes, characters, and relatability to their own lives that united this audience, and laughter filled the theatre in every scene. Under Roberts’ direction and the acting talents of the four performers, this show was able to bring the Saginaw community together through relationship-related humor in a way few shows are capable of executing so well.

The second aspect of this performance would have to be the humor itself. This show is not for children or even young adults, for much of the humor would go over their heads. Jokes about sex, marriage, divorce, homosexual overtones, and suing one’s partner for “not performing well enough” brought out the humor in all aspects of relationships. It must be noted, though, that for one to truly appreciate the humor, one must have experienced a relationship with another person. Those experiences are what united the audience in their laughter. The humor also poked fun at men and women, so both genders feel included in the fun. In one scene, a woman complains about waiting for a football game to finish while a man complains about a shopping trip taking forever, both relatable experiences for audience members. Many couples attended the show together, giving them a chance to kid each other and reflect on their own experiences while together.

The third aspect that made this performance great would be the set design. The show was performed as a series of vignettes, and an electronic sign was eloquently placed atop the stage with the title of each vignette as it appears in each act. For a show with 19 distinct scenes, it was important to have a set and costumes simple enough for quick transitions and scene changes, and this was done with marvelous artistic logistics. Kevin Cole performed engaging scene-change music as the four performers made their costume changes so rapidly that in several scenes I thought another performer had taken the stage. It goes to show the many years of experience the performers have under their belts. Furthermore, the simple set design made transitioning from scene to scene a simple, seamless job. The simplicity of the set in no way took away from the immersion of the show, rather it gave more attention to the performers themselves and their great stage presence. One scene that demonstrated this is when a family is driving in the car and the husband sits behind the wheel, the wife is a backseat driver, and the kids in the back are being too loud and fighting. The set was simple: four rolling desk chairs. The performers slid along the stage and used their legs and bodies to direct the chairs, and the unison of all four performers made me believe they were actually driving a vehicle. That kind of immersion is difficult to achieve, but the performers pulled it off seamlessly.

The fourth and final aspect that made this show great would be the performers themselves. Moving from one vignette to another, the actors took on the roles of many different characters, each with unique traits. They clearly defined each character to the point where I was sure there must have been more than four performers on the stage. After spending several years on a stage myself, I know how challenging it must have been to bring to life so many distinct characters in such rapid succession.

Overall, this timeless production was no easy show to produce. It took an endless effort from the cast members and careful rehearsal with the pianist. It required speedy costume changes and witty humor that must be executed well with an engaged audience. Under the direction of Ric Roberts and his passionate cast, all of the above were successfully achieved in this show. The audience left the theatre as a community united in laugther. The jokes were executed well and understood by the audience. The vignettes were organized thoroughly and flowed throughout the story. The set and costumes were simple and the transitions seamless. The music added the final layer to the cake. Above all, the production of I Love You, You’re Perfect, Now Change under the direction of Ric Roberts and Kevin Cole was one with a humorous plot, passionate cast, resonating music, and audience relatability.