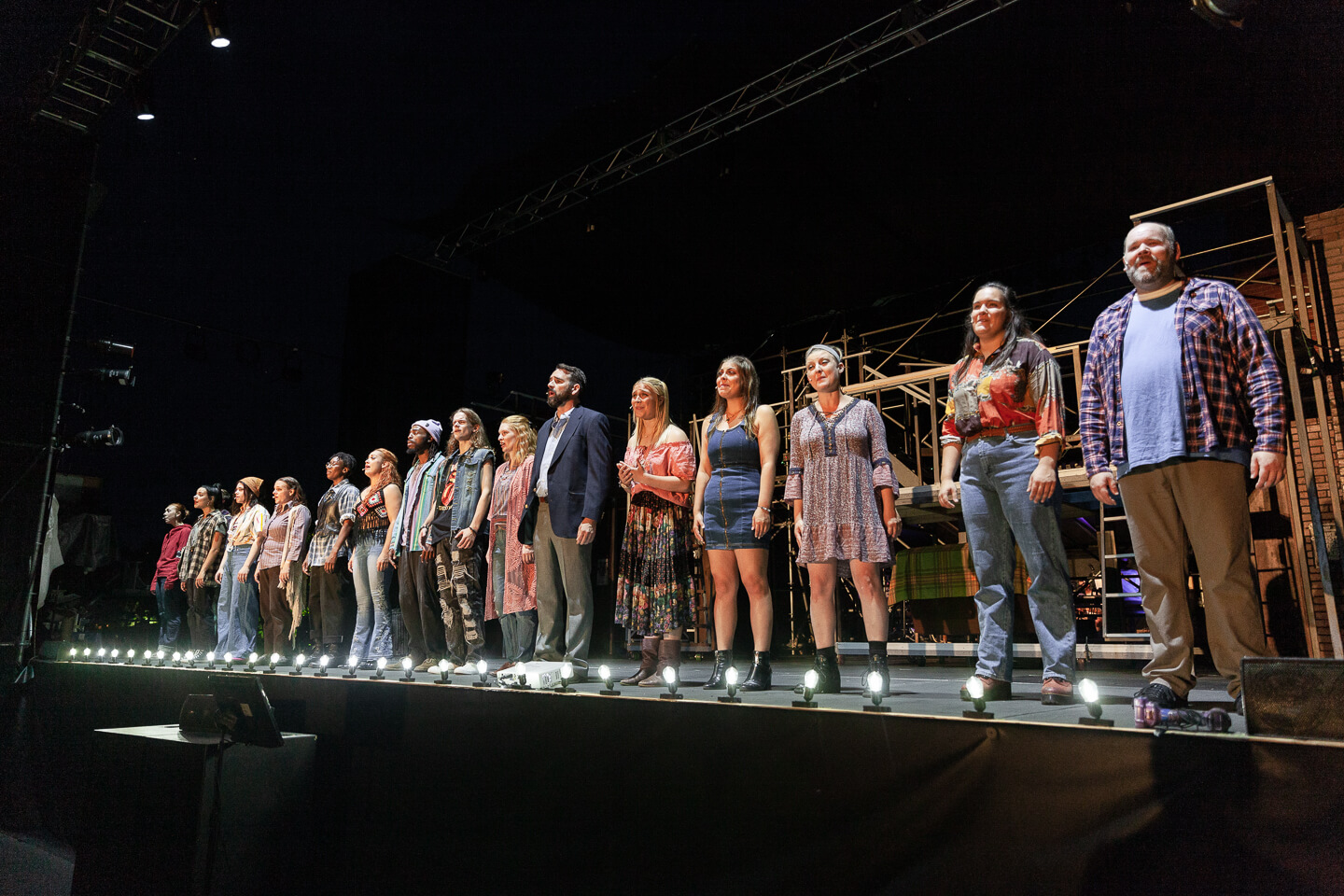 There are many ways to experience theater and last night I had a new experience, theater in the outdoors. I attended the performance of RENT at Midland Center for the Arts on the outdoor stage.  It was an enjoyable experience.  There were picnic tables or folding chairs available for seating.  I chose a folding chair toward the back of the audience.  The chair was comfortable and I could see and hear all the action coming from the raised stage in front.

The play revolves around a group of twenty-somethings navigating life and love in New York City during the height of the AIDS crisis.  The story is told with minimal dialogue, the characters develop through the songs that they sing. Their personalities, emotions, hopes, dreams and frustrations all come out in song. Each of the actors did a tremendous job of bringing their characters to life as their voices filled the open air theater.  Despite some technical difficulties with his microphone during the second act, the character, Tom Collins, stayed the course and continued to perform and develop right before my eyes.

The set was perfect for an outdoor setting, scaffolding to provide visual height and distance, allowing the characters to move and interact all while presenting the picture of space, and a couch and phone to provide some context when the action was taking place in a living space or a business.

The costumes were spot on for the time and the theme of the play.  Maureen, a particularly outlandish woman, had bright colors and sequins, while Mark, the defacto narrator, was dressed in a simple flannel and khakis.  The homeless characters were dressed in layers, with hats and gloves, intimating a life on the cold, hard streets of New York.

The music was at times upbeat even defiant, as in the song RENT, where the characters speak of the deal that was made and broken by a former roommate regarding their current living situation and their decision that they are not going to pay “last year’s rent”.  There are songs of love and lust, Mimi singing Out Tonight to Roger.  And songs of contemplation and celebration, Seasons of Love, which recognizes that there are a finite number of minutes in a year and we need to live in every one of them. The musicians did a tremendous job of providing the musical backdrop for the actors without overpowering their voices.

At the end of the day, Chad William Baker’s direction of this incredible cast, created a thoroughly wonderful theater experience.  You have three more opportunities to participate in this unique experience, Saturday, August 6, Thursday, August 11 through Saturday, August 13.  All performances are at 8 pm.