Murder On The Rails 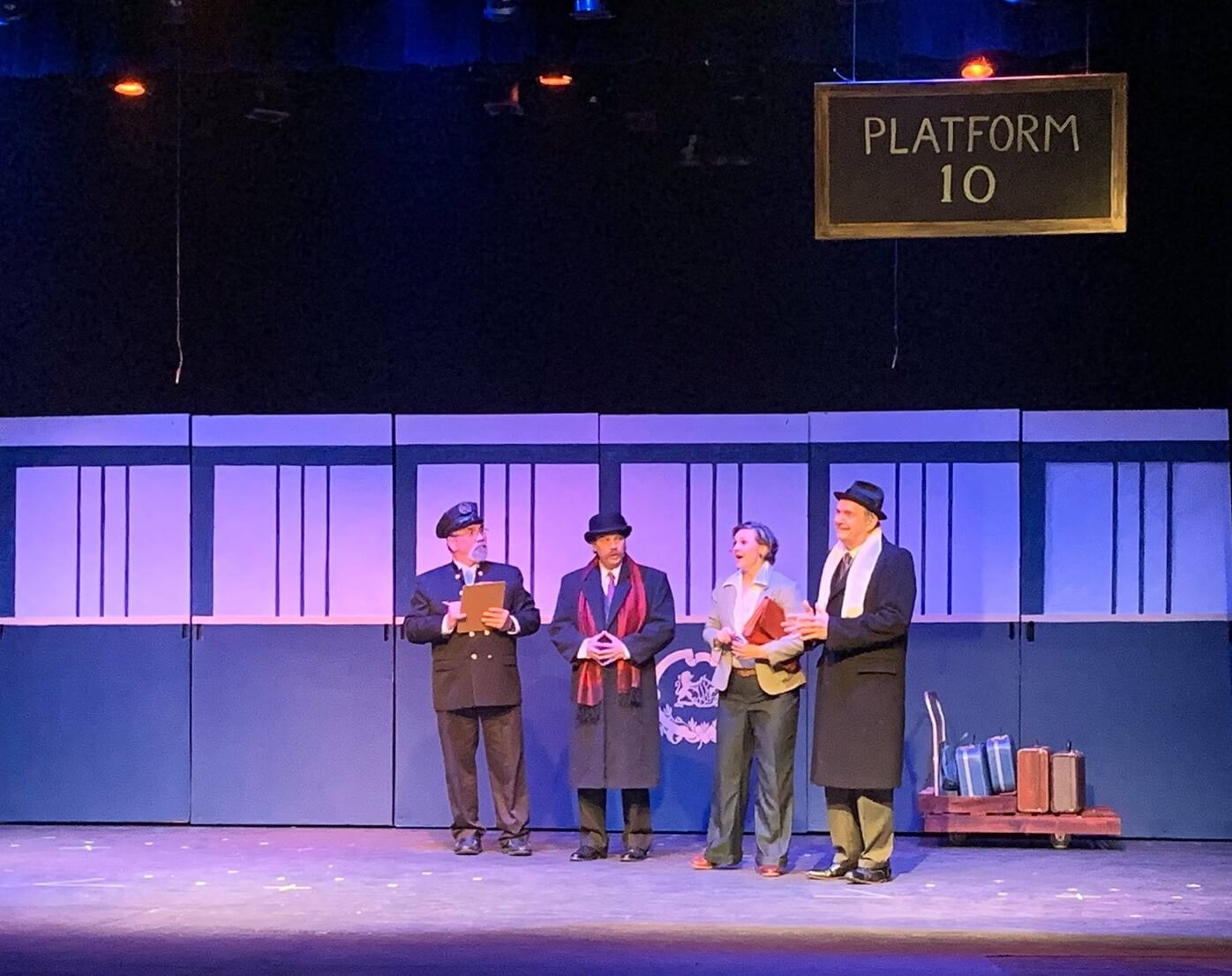 The time? 1934. The location? The Orient Express train stuck in a snowbank, somewhere between Istanbul and Paris. The crime? Murder. The cast of characters include a Russian princess in exile and her assistant, an boorish business man, his secretary, an American widow/divorcee, a countess, a French army colonel, his girlfriend, the conductor/head waiter, a railway executive and a determined French…er…Belgian detective who wants only to reach London but is instead thrust into a murder investigation with this unusual cast of characters. Who has committed the murder and how was it accomplished? The answer can only be found with the great detecting skill of Christie’s own, Hercule Poirot.

Our story begins not aboard the Orient Express, but in an American home. Five-year-old Daisy Armstrong has been murdered. No further information is given. Fast forward to Istanbul, the Tokatlian Hotel, where Hercule Poirot (Matt Kehoe) is looking forward to a few days of rest and relaxation. He encounters his old friend, Monsieur Bouc (Paul Lutenske), railway executive for the Orient Express. As the two friends visit, Poirot receives a telegram requesting that he travel to London for a case. He inquires about passage aboard the Orient Express and is told that the train is full. Bouc orders Poirot be given Bouc’s personal compartment for the trip. And the adventure begins. We are introduced to the passengers as they arrive prior to departure. The loud and brazen American, Helen Hubbard (Sandra Cline); French Colonel Arbuthnot (Shawn Finney) and his girlfriend, Mary Debenham (Emily Shaw); Russian Princess Dragomiroff (Leslie Larkins) and her assistant, Greta Ohlsson (Zoe Gilbert); Countess Adresnyl (Katie Sunderman); the boorish businessman Samuel Ratchet (Finney) and his assistant Hector MacQueen (Joseph McGuire); and finally, the ever-present conductor, Michel (Todd Thomas).

Not long after the train departs from Istanbul, it is grounded in a snowbank. At some time during the night, Mrs. Hubbard exits her cabin screaming that a man was just inside. There is no man there now and the others dismiss Mrs. Hubbard’s claims. The next morning Hector McQueen attempts to deliver breakfast to his boss, Samuel Ratchet. He is unable to open the door. With the assistance of Bouc and Poirot, McQueen pushes the door open and finds Ratchet. He has been murdered, stabbed during the night. Who killed Samuel Ratchet and why? Was it the mysterious man that Mrs. Hubbard saw in her room? Was it another passenger on the train? Poirot will use all his skills to identify the killer and uncover why this crime has been committed. All will be revealed in the end.

Matt Kehoe did an excellent job portraying Poirot. His costume and accent were spot on. Poirot is equally determined and frustrating in his dogged efforts to solve this case. Paul Lutenske’s performance of Msr. Bouc is delightful. He is understandably fraught with despair over what is happening onboard his beloved Orient Express, but the comic delivery of his lines keeps his character from becoming too morose. Sandra Cline’s Helen Hubbard is a true caricature of the loud, obnoxious, entitled American. She is that character that you immediately recognize and hope that you don’t resemble. Shawn Finney and Emily Shaw play well as the couple, Colonel Arbuthnot and Mary. Princess Dragomiroff (Leslie Larkins) is aloof and regal, while at the same time nostalgic for her homeland. She is a mother hen to her assistant, Greta (Zoe Gilbert), who seems a bit lost in the world and just wants to get to Africa and her “babies.” Joseph McGuire’s Hector MacQueen plays a capable assistant, easily overlooked by his employer. Finally, Samuel Ratchet, portrayed by Shawn Finney, is rude, boorish, and unlikable. Finney does an excellent job acting the character everyone loves to hate. There is no love lost among the passengers when Ratchet is killed. But the question remains, who killed him and why? And what does the death of a young girl in America have to do with anything?

Todd Thomas dons several hats in this production. He is not only the director, but also acts as both conductor, Michel and the head waiter. He carries off each role with skill and ease. L’Oreal Hartwell acted as Sound Director. The volume levels were good: no lines lost, no jokes missed. Jasmine Roseberry worked the Light Board beautifully. The cast did not get lost in the shadows as they moved about the stage. And the spotlights were a perfect choice to highlight specific characters when needed. The costume choices (Leah Kaliszewski) and set design (Michael Wisniewski) were appropriate for the time and place. The overall experience definitely transported the audience from modern day Saginaw to Turkey in the mid 1900’s.

Murder on the Orient Express is a wild ride from start to finish. The show runs at Pit and Balcony for three more showings, Friday-Sunday, October 8-10. Buy your tickets online, stop by the box office during office hours or just come in the night of performance. Help support this community gem and support the 90th season of Pit and Balcony Theater.