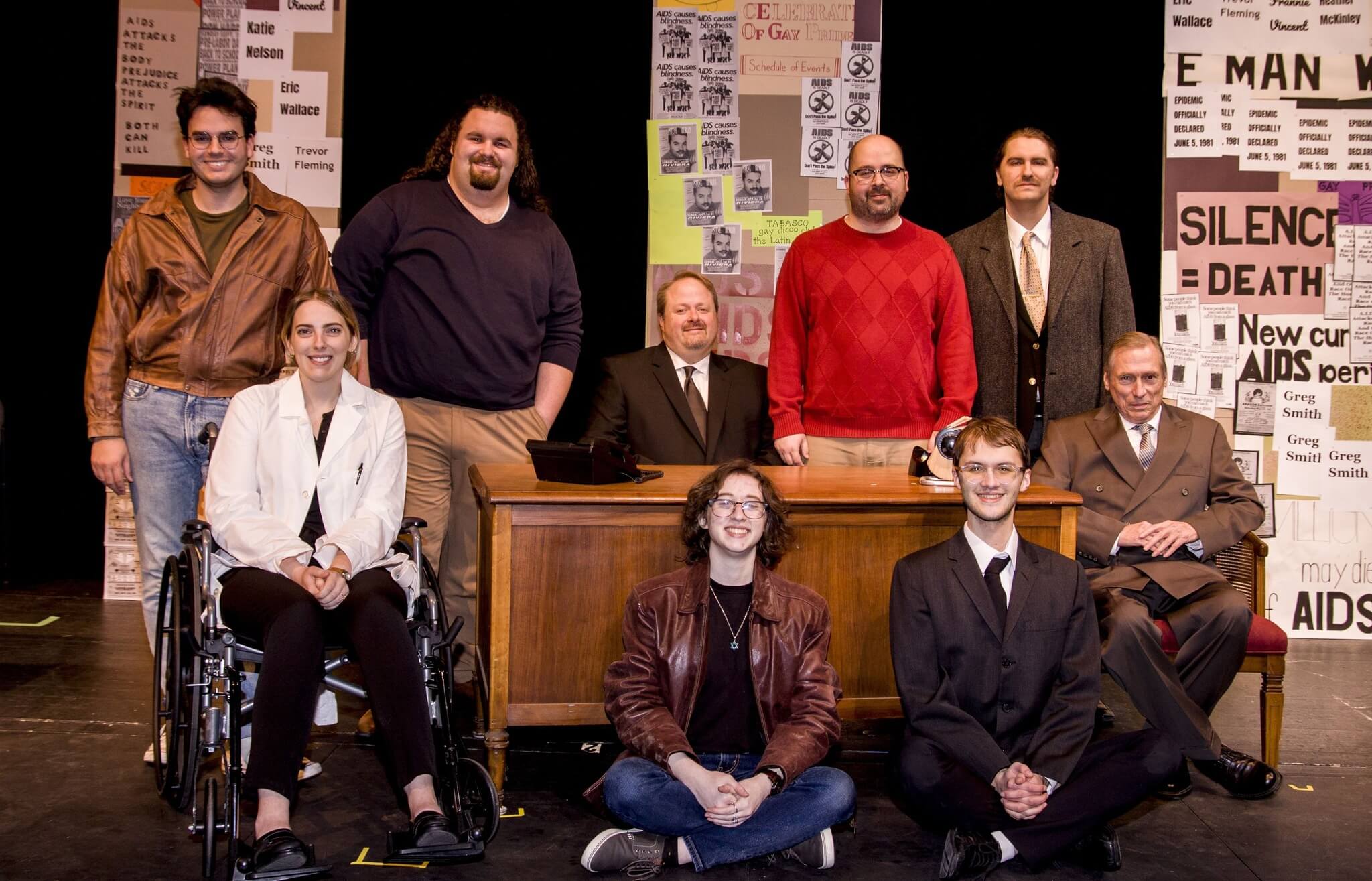 Michael Wisniewski directs a stellar cast in an intensely moving and emotional production of Larry Kramer’s “The Normal Heart”. The play centers in New York City from July 1981 to May 1984, as the AIDS epidemic is beginning.  The characters, a majority of them gay, are living and loving during this time. They see first-hand how this disease impacts their community, how it touches their friends and family personally.  They experience the frustration of trying to make their voices heard as the disease is largely ignored by the government, the press, even the public at large.

At the forefront of the fight to be heard is Ned Weeks, played by Chad William Baker.  Ned is both abrasive in his approach and extremely fragile and emotionally vulnerable.  He wants people to recognize that this disease is real, that it is killing people, and it needs to be researched, examined and stopped.  Ned knows that in order to get the word out to more people, to build up support, there needs to be more research and research costs money.  He approaches his brother, Ben Weeks (Michael Curtis), a lawyer, to ask for help.  Ben Weeks resists.  He doesn’t want to attach his name and reputation to a cause that is only hurting gay men.  The two brothers part company with Ned saying that he won’t speak to his brother again.

Dr. Emma Brookner, played by Brianne Dolney, is the doctor who is on the front lines of diagnosing the patients afflicted with the disease.  Dolney brilliantly portrays Brookner as both a stoic doctor focused solely on the facts and statistics surrounding this new epidemic, and a passionate advocate for her patients.  When Brookner first meets Ned Weeks, she says that she has heard that he has a big mouth.  Ned responds, “Is that a symptom?” to which Brookner replies, “It’s the cure”. Brookner pushes Weeks to speak up loudly and publically about the disease, to draw attention to the fact that people are dying and more money needs to be allocated for research and treatment.

Weeks is helped in his crusade by supporting characters including, Mickey Marcus (Jared Kaufman), Tommy Boatwright (Felix Meisel), and Bruce Niles (Spencer Beyerlein).  The four create a non-profit organization with the goal of making the public aware of the disease and how it is impacting people, and raising money to help with research and treatment.  The organization’s members hold a vote and elect Bruce Niles to be the public face.  Ned understands that Bruce is more palatable to the public but he is frustrated with the choice because Bruce is still in the closet.  Bruce is scared to come out, for fear of his bosses finding out that he is gay.  Ned continues to push the group’s agenda despite Bruce’s objections.  Tommy and Mickey are foot soldiers in the fight.  They work the phones, helping victims find the resources to help, all while watching their friends contract the disease and die.  The numbers of dying grow larger each week and each week Ned and the others count more of their own friends among the dead.

As the fight to be heard continues, Ned falls in love.  He and Felix Turner (Shawn Finney), have a very tumultuous relationship.  Ned is always pushing to get someone to hear his pleas, while Felix would like to just have a quiet life together.  Ned compares the lack of interest from the public regarding the disease to what happened in Nazi Germany.  So many people failed to pay any attention to what was happening to the Jews until it was too late.

All along the group has been trying to meet with the Mayor of New York.  If they can just get him to acknowledge what is happening in the city then they will have the pull they need to seek out funding and support from the community.  The mayor is unavailable, read uninterested.  His assistant, Hiram Keebler (Tim Vacanti) is aware of the problem but doesn’t feel that it is as dire as Ned would lead people to believe.

As the play begins drawing to a close, Felix arrives at Ben Weeks’ office.  He has AIDS.  He is dying.  He wants to ensure that his will is complete and that his wishes will be carried out in the end.  While there he helps Ben to see that his brother is more than just a loud mouth always spouting off about gay issues, he is someone who loves and is loved.

The Normal Heart begins with the diagnosis of Craig Donner (Kyler Syring).  He has just found out that he has AIDS and he falls apart at the idea of dying.  The play ends with Felix accepting that he has the disease and is going to die and Ned still coming to grips with this reality and begging Felix not to leave him. The entire play can be summed up in the final words of the poem (excerpt) placed in the program at the author’s request, “We must love one another or die”.

You only have two more chances to see this moving story.  Get your tickets now at the Bay City Player’s Box Office for January 7 or January 8.