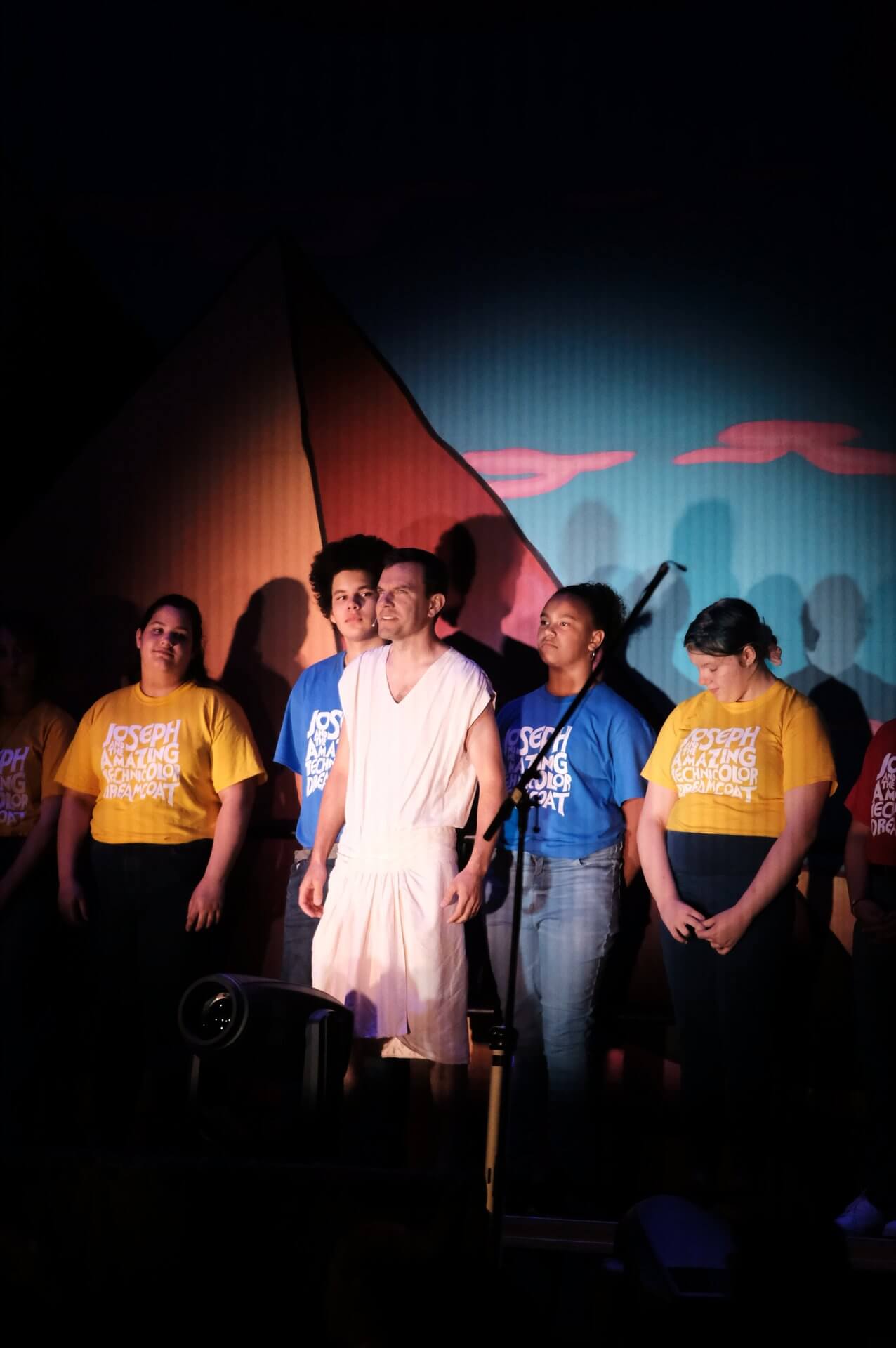 Before experiencing it at the Temple Theatre, Joseph and the Amazing Technicolor Dreamcoat was a show I had not only never seen, but also never heard of before. The story revolves around the life of Joseph, one of the twelve sons of Jacob in the Bible. The story’s plot, music, writing, and action set high expectations for any band of thespians and producers willing to take on a challenging show. When executed well, the result is perfection.

I was caught off-guard by the sheer amount of talent present throughout this production, and such talent could be seen in every moment and aspect of this two-act show. I found myself at the edge of my seat with excitement and engagement, not once losing focus on the unfolding plot. I never found myself bored, for there was always something new and thrilling capturing my attention on the stage. The cast was large but not overwhelming, and I was impressed with the wide range of ages that were part of the cast and had a stage presence. The Saginaw Choral Society played major roles on stage and children from the Saginaw Youth Choir helped make the show perfect for families and audience members of all ages.

I left the show with three things on my mind: the impressive yet simple set and costume design, the intriguing and well-executed music that came from the live pit orchestra, and the deeply rooted themes that lay at the core of a biblical musical.

Let’s begin with the set and costume design. This is arguably one of the toughest parts of a production to master, as well as one of the most integral when it comes to immersing an audience in the show’s setting and atmosphere. For a production that takes place in Canaan and Egypt, set design has to be executed well, and this crew did just that in a simple yet astounding way. Most of the set revolved around the artistic brilliance of its background. Various backdrops of Egyptian pyramids, pharaohs, skylines, and desserts were intricately designed and colored. The costumes for the twelve brothers included a simple stole, which was just enough to distinguish their characters without overdoing them. There was not a plethora of objects or “things” that overtook the stage. Simple black boxes and bleachers were all that was necessary on the stage itself. Such minimalism ensured the actors captured the audience’s full attention while still painting the perfect picture of Egypt and Canaan in biblical times. In this production, less was more.

Secondly, the themes and meanings behind this production were present at every step of Joseph’s journey. Joseph was favored by his father, Jacob, and this caused envy and criticism from his brothers. Joseph is betrayed by his brothers and sold into slavery in Egypt, but hope springs eternal and Joseph rises to power in Egypt. Throughout the winding journey of Joseph’s life, well-placed and executed humor provides necessary comedic relief for the audience as they grapple with powerful messages and deeply-rooted themes.

Finally, the live pit orchestra performed phenomenally. As a former pit instrumentalist and conductor, I know how difficult it can be to stay in sync with the actors and singers on stage. It is a daunting task that this orchestra executed well. The show’s music also spanned many decades of musical styles, including variations on musical themes from the 1950s, 60s, and 70s, including an entire song dedicated to an Elvis impersonation.

Overall, the music coming from the pit coalesced with the action and energy on stage and resulted in a priceless work of art.