Preview for: I Love You, You’re Perfect, Now Change 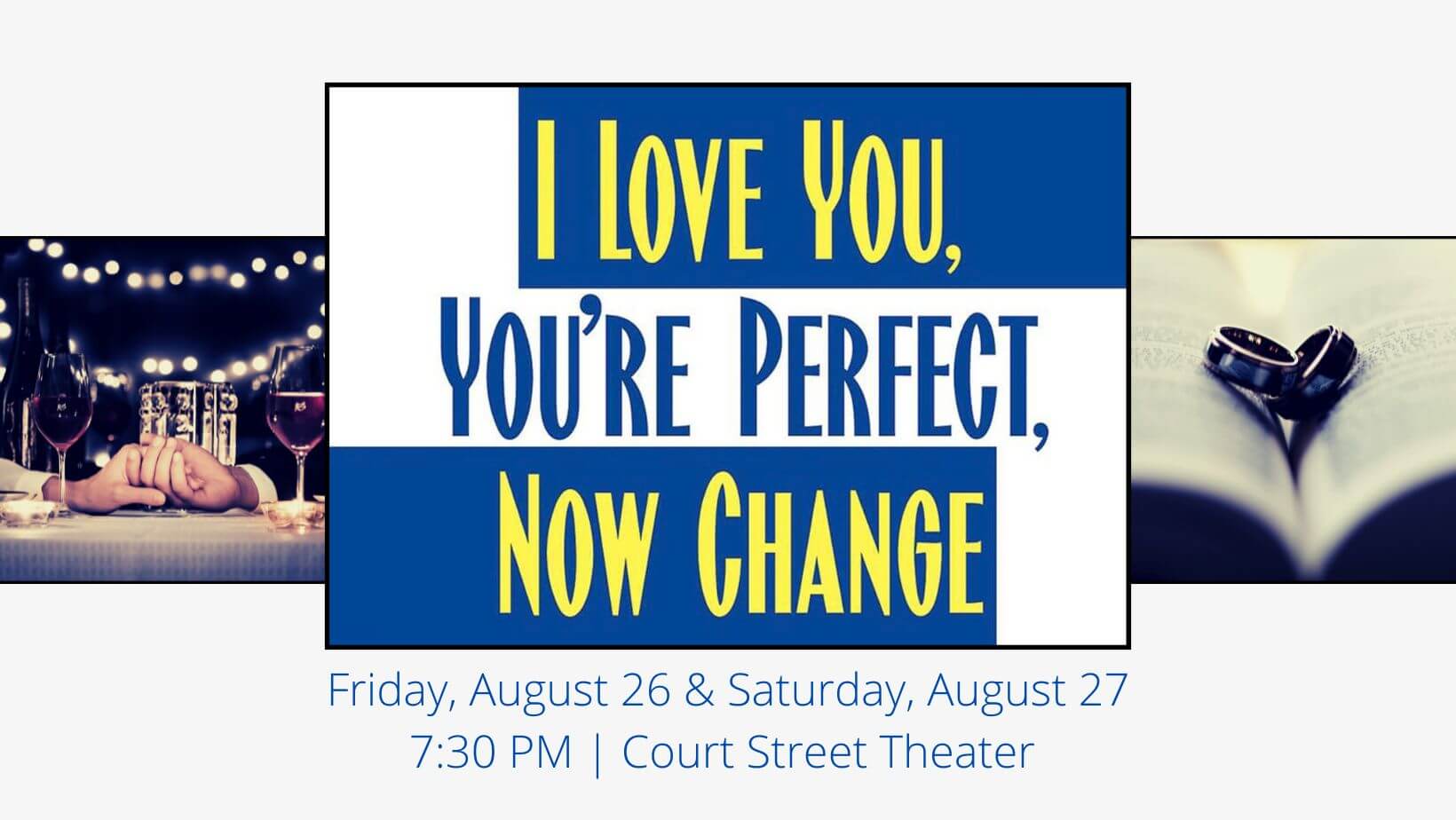 This week, I Love You, You’re Perfect, Now Change will be performing at the Court Street Theatre in the City of Saginaw. The show performs August 26-27th at 7:30 P.M.

The show is performed as a series of vignettes that revolve around themes of love, relationships, marriage, family members, having children, and other relatable characteristics of dating and romance in a comedic fashion. The musical was written by Joe DiPietro and opened in 1996, and has since become the second-longest running off-Broadway production that has been translated into several languages.

The show is recommended for those 16 years and older. Audience members will get to enjoy stadium seating and the option of all-inclusive hospitality services, such as cocktails or beer.

Ric Roberts is directing the show and shares decades of experience in the realm of theatre. Formerly serving as a college professor and the chair of the SVSU theatre department, Roberts has been involved in community theatre and has performed at venues like the Temple Theatre.

Roberts said that a full musical has never been done at the Court Street Theatre before, and it is owned by Stephanie and Tom Braley.

“(They) have been enormously helpful in bringing this to fruition,” he said. “The Court Street Theatre is a great little space that has so much potential for theatre.

I Love You, You’re Perfect, Now Change is a jukebox musical, which is a musical that features songs and music from a particular genre or group of musicians, such as American Idiot, which features music from Green Day, or Grease, which revolves around the do-wop music of the 1950s.

The Saginaw Choral Society is responsible for the funding of the production and its $12,000 budget, an arguably large amount for such a small cast.

“The budget is not cheap on this show, but it’s relatively cheap compared to … a major production,” Roberts said.

Although the cast is comprised of only four actors, the show includes 54 unique characters, which means the actors and actresses will be changing in and out of various costumes and taking on several roles throughout a production Roberts says fit in at 2 hours in length.

Roberts said that scene change music is being taken out of modern theatrical productions because people want theatre to be fast-paced like movies, but in this show, scene change music is required for the cast members to change into the plethora of costumes they were responsible for pulling together.

Roberts said he wanted to “fill the void” that often exists during the summer months for theatre, saying that many productions work and perform in the spring and fall. While the Saginaw Choral Society boasts 80 members, I Love You, You’re Perfect, Now Change features such a small cast that it is easier for performers to collaborate and rehearse throughout the summer months one-on-one or in groups.

“These little shows are what really keep community theatres going because they are the things you can put together quickly,” Roberts said.

To Roberts, to show’s success is defined by the growth of the performers, especially those who were more timid when starting. He is also honored to have the opportunity to direct such a show this summer.

But Ric Roberts isn’t leading this summer project alone. Kevin Cole is a famous pianist who began his studies as a young boy, catching the attention of world-renowned composers and songwriters like Irving Berlin. Cole is known for his talents at the keyboard, particularly his knowledge and performances of American composer and musician George Gershwin’s works as well as scores from the Great American Songbook. Cole is considered the best Gershwinian pianist alive and has been praised and recognized by the Gershwin family itself.

Cole has spent his musical career building his repertoire by working in cities like Chicago, Los Angeles, and New York City. He loves collaborating with Ric Roberts on productions and sees a future working together on other projects and performances.

When it comes to I Love You, You’re Perfect, Now Change, Cole said that relationships have seen little change through the ages.

“Relationships are relationships whether they’re in the 1920s or the 2020s … Our clothes change, our hairstyles change, and the technology changes, and that’s it.”

He said that the universal appeal of this production is the way it touches on relationships, what bugs people and couples, such as the fear of missing out in life, being open, and trying to change others.

Cole said that Ric Roberts does an excellent job as the director in finding the balance between comedic and serious elements throughout the show and that with such a talented small cast, he is able to rehearse with them on more complex aspects of the music they’re learning.

“Because these four performers are so strong and are really fine musicians as well as actors, they do their homework,” Cole said. “They’ll take the material, they’ll learn it, and then we just polish it musically. It’s not like I’m teaching from scratch, which you have to do when you’re dealing with a big cast musical because you have people of different levels of learning a show.”

Cole said that the show features two ballads, one of which deals with the complexities of a couple sustaining their love as they grow older.

Cole is the only instrumentalist in the production, and the grand piano is the only instrument. Cole has performed many recitals as an accompanist at Interlochen, SVSU, among other venues, and he spends much of his time in front of large audiences and concert halls, but what he really loves is the collaborative process that is working one-on-one with others.

“Success to me is this collaboration that works both ways, with the Choral Society that wants to expand and branch out in what they give the community, but in doing so it’s allowing [Ric and me] to strengthen our relationship artistically.”

Kevin Cole and Ric Roberts joining forces on this production bring decades of theatrical and musical talent and experience to the table.