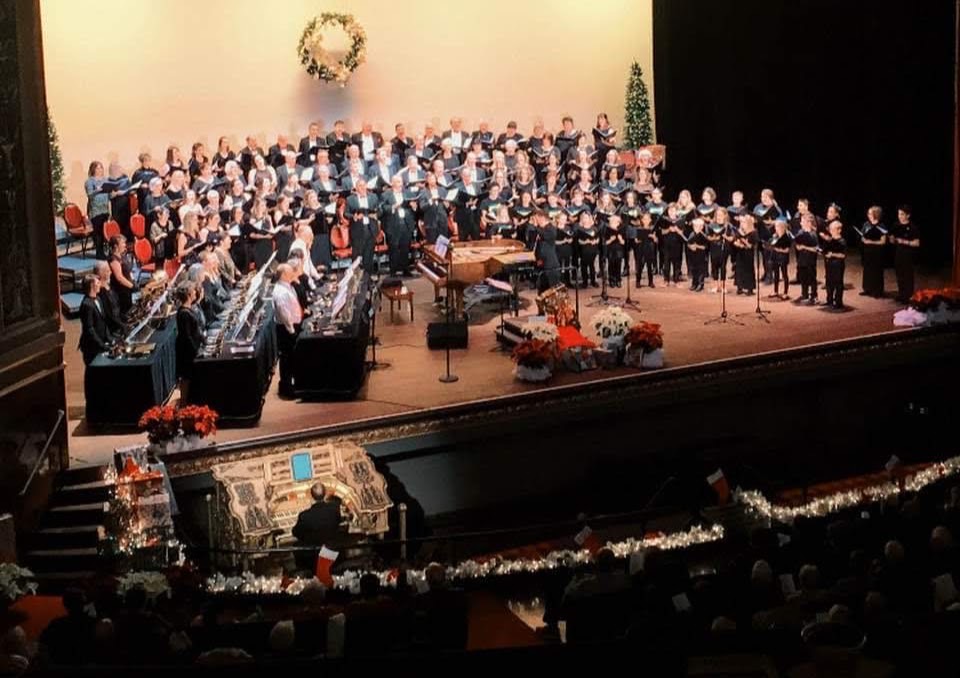 Conductor Jeremiah Kraniak began “Holidays With the Saginaw Choral Society” (Sunday, Dec. 8, at the Temple Theatre) with a personal narrative about his Christmastime experiences.

While he didn’t mince words about his distaste for winter, including the troublesome weather we all in Michigan know so well, he stated that he always separated the holiday season from winter, highlighting through his own childhood stories what makes this time of year so special: making memories surrounded by those we love.

Appropriately, the Saginaw Choral Society made the audience feel home for the holidays.

Upon entering the theatre, those in attendance were greeted with a festively decorated stage including Christmas trees, presents, and a large wreath displayed high above. The Temple Theatre itself as a setting contributed to the mood, as its timeless elegance added just the right amount of nostalgia for those lost in their own yuletide memories.

Of course, none of this would matter if the concert itself was a letdown. Kraniak indicated the challenges of planning a holiday program, citing his desire to avoid scheduling an overly predictable show that included “all the same carols” one might expect.

Fortunately, this was not the case. The concert was full of variety, including not only the expected outstanding vocal performances from the Saginaw Choral Society but also the Saginaw Youth Choir (directed by Emerald Joiner) and Bells on High (from Saginaw’s First United Methodist Church).

Great care was obviously taken to craft a lineup of songs and performances (including a handful of sing-a-longs, during which Kraniak excitedly encouraged the audience to participate) that never felt mundane or tedious.

Among the highlights were a spirited performance of “Jingle Bells,” which featured several tempo shifts that brought new life to an old standard; a fun escape to Whoville thanks to the Saginaw Youth Choir’s take on “You’re a Mean One, Mr.Grinch”; violinist Nathan Bieber’s performance in “Brightest and Best”; the outstanding soprano vocal solo  by Heather Seaton in “Fantasy on Coventry Carol”and, perhaps the best moment of the night, the musical take on “’Twas the Night Before Christmas,” which featured a clever instrumental and vocal arrangement including multiple vocal soloists who, in song, contributed plot-points to the famous story.

Finally, enough praise cannot be given to Kraniak, Joiner and pianist and Bells on High director Catherine McMichael, who not only provided skilled musical leadership, but clearly had fun doing it.

In his opening statement and throughout the show, Kraniak emphasized that the best part of the Christmas season is the happiness that it provides.

He stated that this happiness is often found at home with family, and that, in many ways, the members of the Saginaw Choral Society had become family to him.

Those in attendance undoubtedly could feel the happiness shared by all of the talented vocalists and performers and were all thankful for the early musical gift they had been given at the Temple.