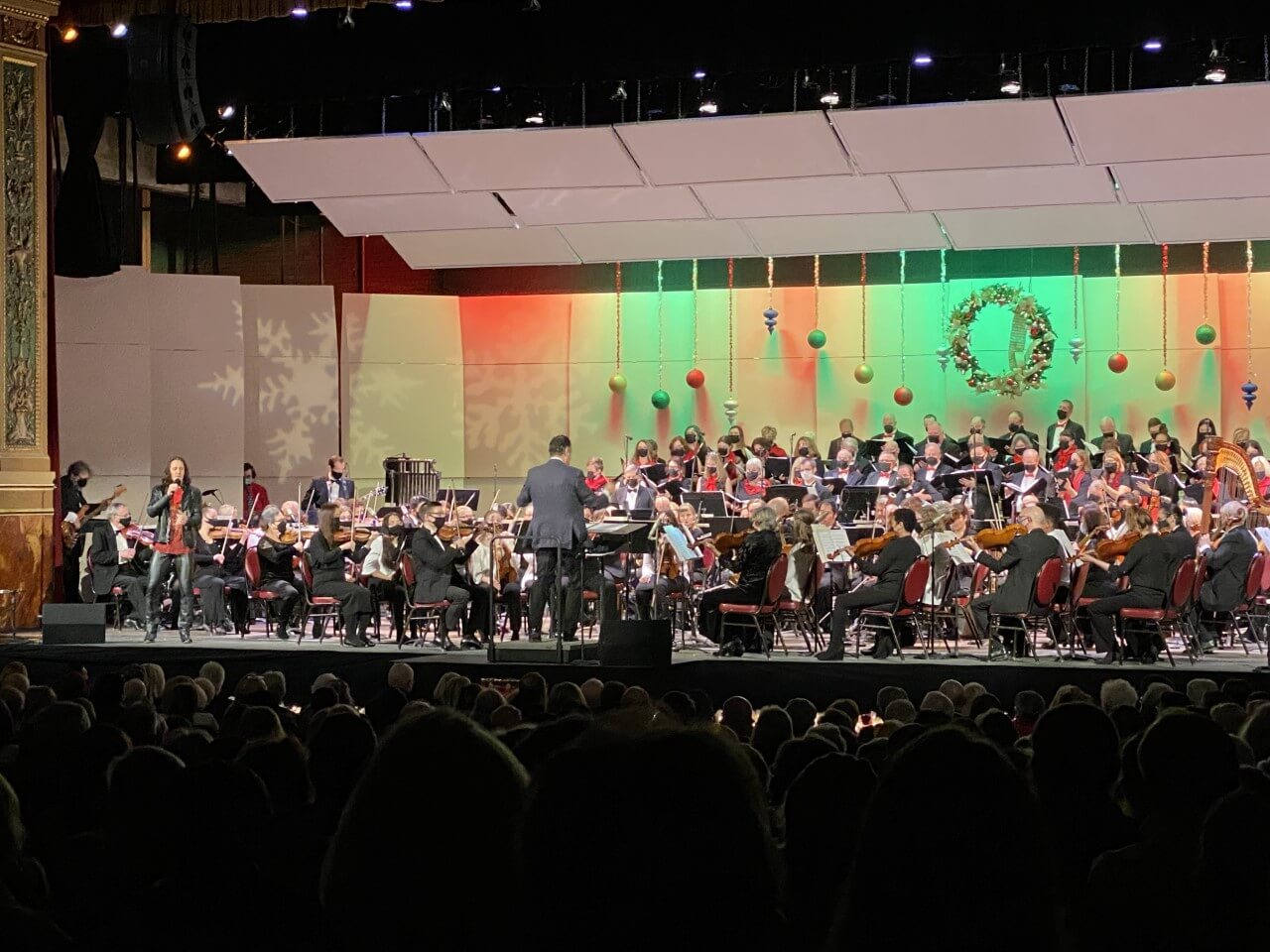 If they had added one more person to the Temple Theatre stage as the night progressed, the conductor’s  podium would’ve fallen into the pit. Something like160 musicians and singers jammed into that space.

And God can that orchestra and choral society rock when comes to playing two notable hits by Foreigner and Bon Jovi — both of which had nothing to do with the holiday season but who cares when it is Todd Michael Hall who sings them, at far left not center stage.

Then there was the cheering audience in attendance, at a near capacity in the cavernous facility.

So much fun too.

There was the “Thunder and Lightning Polka” by Strauss, with an enticing rolling sound from the percussion section.

Two wonderful arrangements of the familiar “The First Noel” and “O Come All Ye Faithful” that invited the eyes to close and just listen to the incredible coloration in the orchestra and in the chorale.

Forget the all-too-familiar “Hallelujah Chorus”  by Handel, which was performed, but enter just before it the Mark Wilberg arrangement of “Alleluia,” made famous by The Tabernacle Choir, that was absolutely soothing to the soul with its quiet subtleties and meditative sound from the strings and singers.

Add in a new take on the Leroy Anderson “Sleigh Ride,” titled “Caribbean Sleigh Ride”  by Wendell. With the colorful stage bathed in a sun yellow.

The Saginaw Youth Symphony  joined the symphony in two selections by Wagner and Dvorak, again not of a holiday bent but heavy classical fodder for the kids to digest.

And the Saginaw Youth Choir joined in on John Williams’ “Somewhere in My Memory” from the movie “Home Alone.”

But as a reviewer I have to admit I was there to see and hear Hall, a businessman and Saginaw resident who made his presence known on NBC’s “The Voice” series… normally a heavy metal singer but with a voice that goes far beyond that.

So that bucket list was checked off last night in grand style. He sang one Christmas song, but it was the performances of “I Want to Know What Love Is”  by Foreigner  and “Livin’ on a Prayer” by Bon Jovi that will be etched in my mind forever and ever.

His voice, people, HIS VOICE. And backed up by some mean guitar work and an orchestra and chorale willing to let loose and ROCK with a orchestral/vocal sound that filled every inch of that theater — and in no way could ever be matched by a band or back up singers.

Bravo maestros Fouad Fakhouri (symphony)  and Jeremiah  Kraniak (choral society)  for daring to insert  unusual arrangements of old familiars and programming non-holiday music. A shout out to the incredible sound coming from both the symphony and the masked singers (and the expert work of the technical crew who enhanced them). Fabulous solos by the chimes  player and the concertmaster in two of the works. Loved the ever-changing  light patterns on the sparsely decorated stage.