Still Rocking over a Half-Century Later 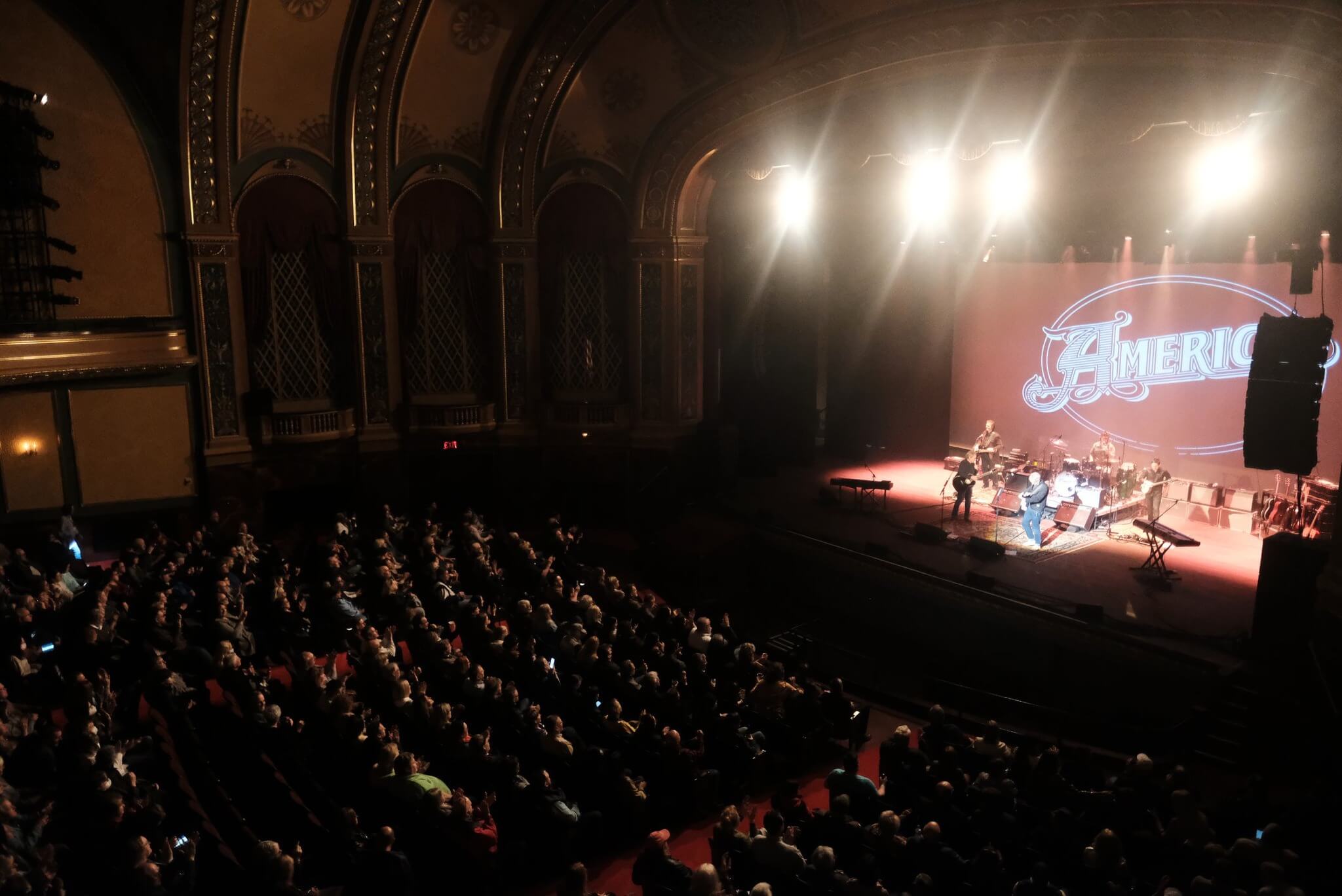 The year was 1971. The Vietnam War was starting to wind to an end, service men were trickling home, and the band America made its debut in England. It would be another year before their hit song “Horse With No Name” would rocket them to the top of the billboard charts in the U.S.

The bandmates Gerry Beckley, Dewey Bunnell, and former founding member the late Dan Peek got their start while attending a school for the children of American service personnel stationed near London in the late 60s.

Meanwhile American servicemen waited orders to return stateside after the war. They were  homesick listening to ballads like “Daisy Jane,” and “I Need You,” and opined the days when they could come home.

Though it seems a lifetime ago, many of the nearly 1,200 people who filled the Temple Theater on Friday, April 8th were from that era. They gave standing ovations when founding band mates Dewey Bunnell and Gerry Beckley belted out hits that made them famous a half-century ago, each with the enthusiasm and voice that made them famous.

Their first standing ovation came not after their popular cover of “You Can Do Magic,” or the opening number, “Tin Man,” but well into the set with “Ventura Highway.” The song is on their Homecoming album, and resonated with the audience, which was made up of the generation who first heard the band in the early 70s.

For just over an hour and a half, the band ricocheted through a playlist that included not just their most popular songs, but some they dusted off for the tour, including “Survival,” and “Greenhouse.”

“Greenhouse is a rock song about gardening,” quipped Beckley, whose banter with the audience was mixed throughout the show. Another song, he said was number one in Italy, but in the U.S. “not so much.”

Both Bunnell and Beckley, at 70, displayed an enthusiasm for the music and the audience that became even more electric when they rocked out with their young lead guitarist Steve Fekete and drummer Ryland Steen. The band is also supported by bass player Rich Campbell. Despite not being original to the band, the sound was much the same as when it was recorded originally when Bunnell, Beckley, and Peek mixed harmonies in the early days. Only Beckley’s voice sounded a little strained as he powered through his solos.

Their easy banter with the audience is evidence that doing 100 shows a year for the last five-decades has them at home on the stage no matter the size. Beckley says they were exposed to pioneering rockers like Pink Floyd, The Who, Led Zeppelin, Elton John, and Rod Stewart, and eventually opened for some of them in the beginning. A few of the cover songs they played were from those days when they got access to new music before anyone else, including “California Dreamin’.”

While the band played, their album covers, old photographs and the scenes from eras gone by weaved a tapestry behind the music. While Bunnell rocked to “Cornwall Blank,” the scenes were reminiscent of the psychedelic days of lava lamps and hallucinogens, but then while they “jammed out” to “Hollywood,” old black and white photos of some of the Hollywood legends flashed behind the band.

Most of the members of the audience were well familiar with the music, the lyrics and the imagery, but peppered in the audience were a handful of teens and the grandkids of the original rock-fans, who only see photos of civil rights leader Martin Luther King, Senator Bobby Kennedy, and shelling in Viet Nam in history books. During “Sandman” the images brought back a time when the war, the protests, and the assassinations were very real. But the song drew a standing ovation from an audience well familiar with sleepless nights when sleep was something to be dreaded.

The set ended with the classic “Sister Golden Hair,” and a few people were on their feet dancing and singing along. In the end there was one song they hadn’t sung – and as might be expected, it was their encore. The audience was on their feet for America’s signature classic, “Horse With No Name.”

For many it was a trip back in time, but for a lot of people Beckley and Bunnell’s enthusiasm and love of their music is timeless. Thanking the audience ahead of time for supporting live music, the band-mates transcended time bringing the live music that so many people opine for today. The concert was a breath of fresh air after taking off the masks.