Superior Donuts Is a Winner 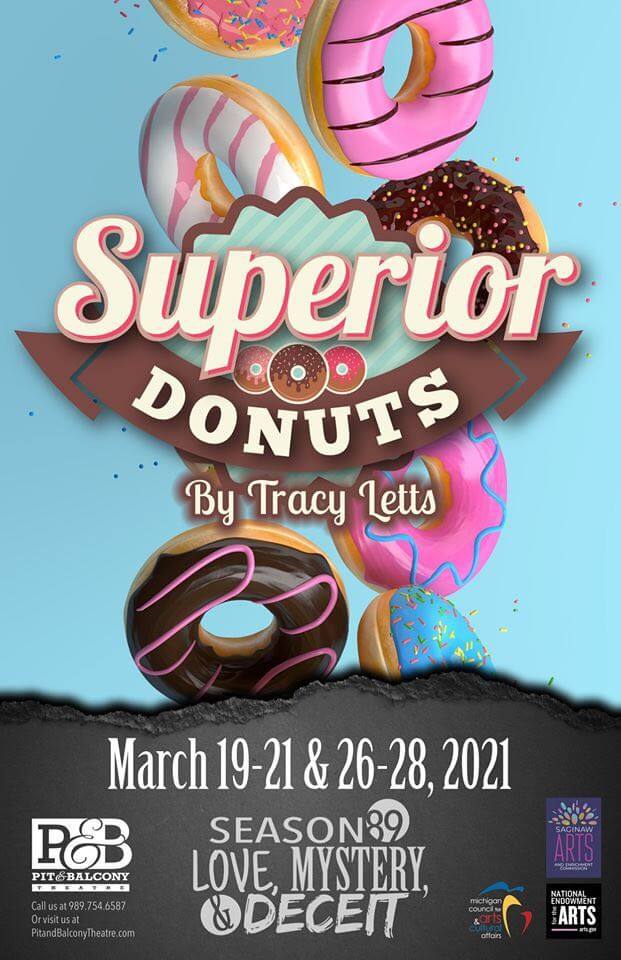 It was great evening, just to be in the theater again! Not a huge crowd but a good crowd.

It is directed by Glecia Tatum, her first show at Pit and Balcony however, she has produced plays and performances at First Ward Community Center.

Superior Donuts is like a guilty pleasure. It’s similar to having a real donut instead of having the Keto bran muffin that you should be eating. Just saying, “donuts” makes you think of comfort food.

The performance takes place in the 2008 Uptown Chicago family-owned donut shop as urban renewal is taking place with a Starbucks opening across the street. It has two main characters that explore the trials of the past and the healing power of friendships today.

Arthur Przbyszewski , of Polish-American decent, and a 60’s antiwar participant is portrayed by William Campbell,  a experienced Saginaw area actor.

Franco Wicks, a young black aspiring author hired by “Arthur P.”, tells him to fix the coffee shop up a bit and maybe have poetry nights. He is played by Isaiah Crawford, experienced SASA and SVSU actor.

Arthur recites monologues that discusses his past and looks back on the city as it was when he was younger. These orations separate the scenes. There is a lot of his past he shares with the audience but is reluctant to tell the other characters in the play.

The storyline has been compared to a 70’s situation comedy. It is somewhat predictable. It was a CBS sitcom starring Judd Hirsch and Jermaine Fowler starting in February of 2017. It was cancelled after two seasons. The play had a limited run on Broadway but it has been popular with community theaters throughout the country. Many have produced it.

On a scale of one to five of my “How Do You Like Those Apples” rating, I’d give it 4 apples because of the persistent performers. There were a few glitches but if you concentrated on the acting, they were hardly noticeable.