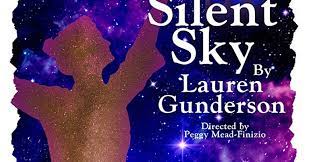 “In the particular is contained the universal.” – James Joyce

Much like its main character, SVSU’s production of Silent Sky by Lauren Gunderson is pushing the envelope of technology, boldly taking steps into new realms and thereby expanding our understanding of ourselves and our world. With only five actors on a deceptively sparse stage, director Peggy Mead-Finizio – with formidable technical help from scenic designer Jerry Dennis, sound designer Lucas Inman, light designer Jaden O’Berry, and projection designer Abbey Kuhns – has crafted a universe both expansive and intimate.

Gunderson’s Silent Sky is a work of historical fiction built around the life and work of early 20th century astronomer Henrietta Leavitt. Portrayed beautifully by Alyssa Yankee, Henrietta defiantly pursues her passion for astronomy, pushing her way into a field mainly occupied by men. In doing so, she must fight the limitations placed upon her by her equal-but-opposite sister, Margaret Leavitt (played by Zoe Gilbert), her supervisor at Harvard, Peter Shaw (played by Jared Kaufman), and even the cohort of capable women in her department, Annie Jump Cannon (played by Lexie Schultz) and Williamina Fleming (played by Kee Ferguson), who are content in or resigned to being computers: providing precise calculations without analysis or credit. Henrietta insists on thwarting expectations and rises above others’ limitations to broaden the boundaries of scientific knowledge, and, indeed, expand the universe.

Frustrated that her work is unfinished, Henrietta frets over her legacy. In the end, she sees her work recognized and used by many astronomers (including Edwin Hubble), and it is on her discoveries that the work of the Hubble Telescope and even the recently-launched James Webb telescope are built.

Each of the five characters is played capably and empathetically. This script and these actors are telling not only their characters’ stories, but historical stories of a time and place, of societal roles, of ambition and sacrifice, of scientific advancement, and of the power of passion. This is a heavy load for only five actors to carry, but they appear to carry it effortlessly. The script and the portrayals were profound, humorous, and utterly captivating. I was immersed in the storytelling and often forgot I was reviewing this, foregoing note-taking to enjoy my time with these powerful women.

The storytelling is greatly enhanced by the impressive use of 10 projectors synced on two computers utilizing cutting-edge software to coordinate lights, sound, and projection cues. Staging and technical elements worked together to create multiple environments and transitions, and the projections managed to bring the universe into the theater with us. Hats off to Peggy Mead-Finizio and her designers and running crew for taking this leap into advanced theater technology. SVSU has ventured out on a technological limb here but they have pulled it off, to the betterment of this and future SVSU productions.

[I would also like to comment on the use of backstage crew in this production. I appreciated the graceful set changes accomplished by the barely-seen crew in the darkness between scenes, and not seeing costumed actors dragging set pieces around the stage at each transition.]

Gunderson’s work is part of a growing trend to correct the historical erasure of women in science. It underscores the sacrifices required of women who had to potentially trade family, marriage, children, and even their health in order to achieve anything outside the home. This particular story of Henrietta Leavitt’s triumph is the universal story of all women who aspire to scientific achievement. Silent Sky is a vibrant portrayal of a compelling story, relevant and enjoyable on every level.