The Beauty of Wild Grasses: Urban Sustainability and the New Perennial Movement 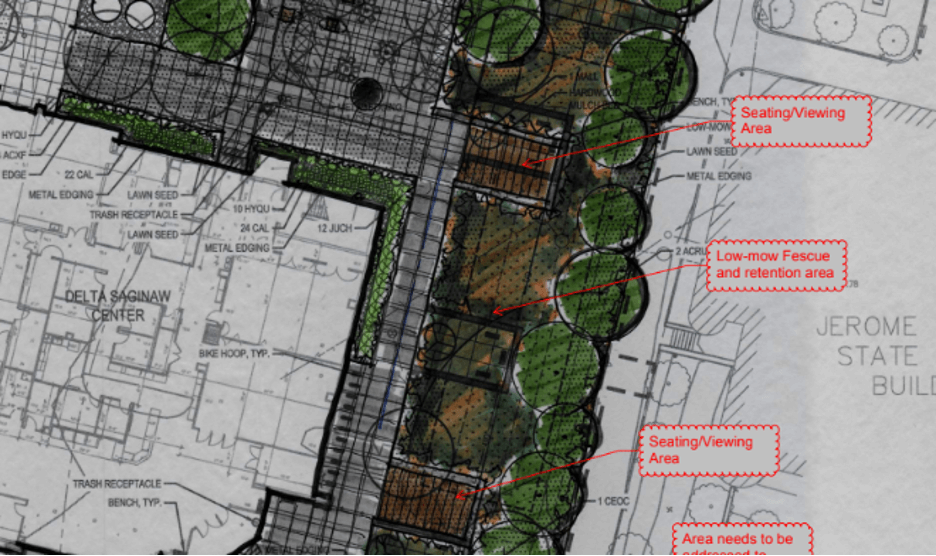 In Saginaw County, a treasure lies underfoot, beneath the fields of soybean, beneath the over-fertilized lawns and endless parking lots. It inserts its lush grasses and burgeoning oak across our city, shattering our concrete, calling for the birds and insects. This treasure is naïvely labeled a “weed” and we thusly spray it with herbicide. This treasure buried under our city is the wetlands – as majestic as the Shiawassee Wildlife Refuge, as peaceful as where the Saginaw River begins down in Wickes Park, more beautiful than any manicured garden. Are we willing to work with Nature’s plan or must we always wrestle with her?

Every local gardener should visit Delta College’s Downtown Annex. Along a wide path, you’ll find dark purple pin cherries pop against the variety of luscious, tall golden grasses. Rich with contour and texture, the warm autumnal colors of the eclectic garden lead the eye up and down diverse tufts of flora, spackled with the season’s very last wildflowers. The red fescue whisper musically in the wind. Inspiring and educational, it is downtown Saginaw’s example of what the leaders in garden design and urban sustainability are discussing. Though petite, it deserves attention for its aesthetic and philosophical approach, unique for our rust-belt county so obsessed with fussy, expensive lawns and misplaced flowers. 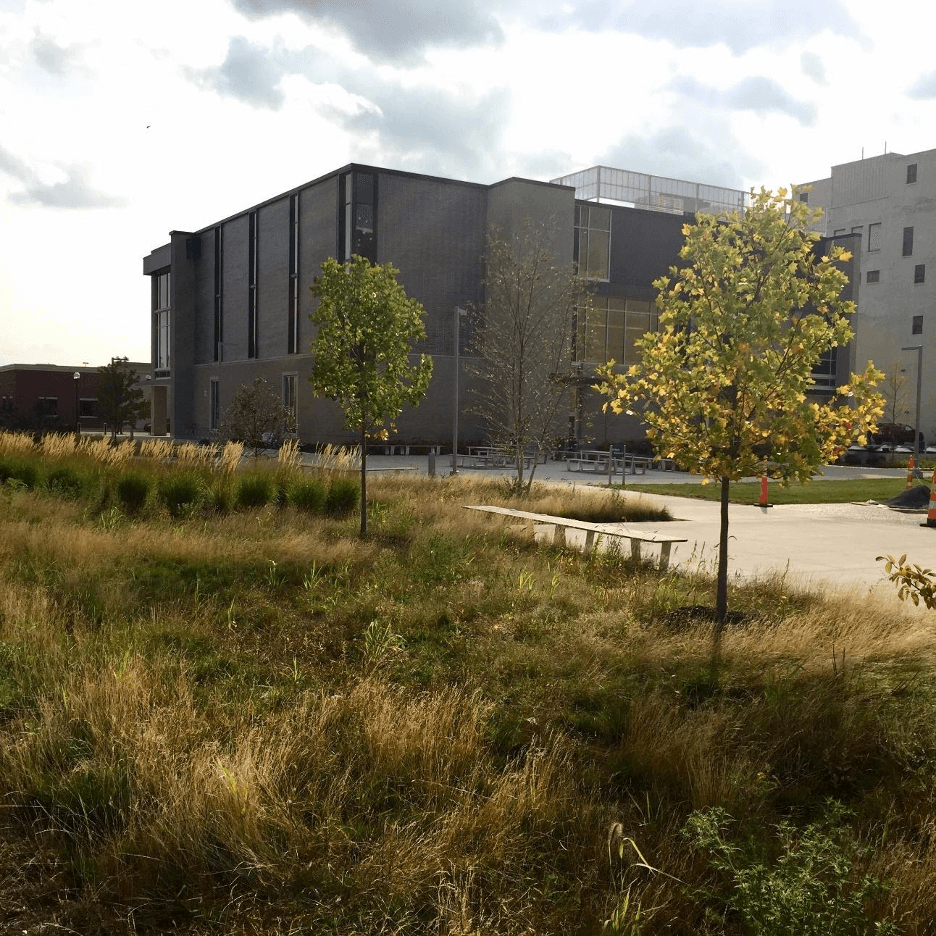 Under the requests of Delta College, WTA Architects designed a rain garden utilizing plants suited to our local climate. Functioning to catch and retain water naturally (known as bio-retention), the garden relieves stress on city pipelines as well as reduce potentially toxic run-off into the Saginaw River. What once had been mostly unused parking lot has now become a self-sustaining garden. Locally adapted plants and native flora, such as white clover, were selected for their ability to withstand both heavy rainfalls and dry spells. By using local flora, the garden requires little maintenance and little resources yet gives back so much richness for our local ecology in way of soil nutrition, water conservation, water filtration, bird habitation, and allowing a diverse array of helpful insects to prosper.

The design, headed by Joe Wyot and Kyle Versman, is a garden rich in function as it is rich in beauty. The undulating plants, ebbing and curving, spangled like water color, provide the perfect counterpoint to the hard, sleek lines of Delta College’s building. The pedestrian path, bordered with chalky limestone, is hard-angled with gridded squares yet gently arcs its way along the garden, mediating the organic forms of the grasses with the rigid forms of the college structure. It does beg a question; if strategically using native or locally-adaptable plants is both resourceful and beautiful, why doesn’t the city implement it along our roads and in our parks?

The city is only just beginning to open itself up to these possibilities. At the corner of Genessee and Niagara Street is a garden of wildflowers known as the Janet Nash Preserve. Completed in 2017, this acre-sized garden’s intention is to showcase a slice of wetland beauty in the middle of our cityscape. Like-wise, the “Pollinator Project”, which began in 2017, plants native bee-and-butterfly loving flowers on abandoned city lots in order mitigate lawn care costs, renew our waning pollinating culture, enrich the soil, beautify the city, and promote ecological awareness. Both of these projects are headed by the Saginaw Basin Land Conservancy. Unfortunately, the most common critiques regarding these eco-uplifting projects is that their wildness appear as “eye-sores,” “filled with weeds”. Part of these critiques might be due to short-sighted design choices, such as the design of the Janet Nash Preserve whose heavy flower-focus leaves the park only seasonally appealing. However, most of these complaints are due to a social culture with a taste for expedited beauty and exotically bright begonias.

Our city, historically, has preferred wrestling and wrangling nature. We speak with pride about the lumbermen who wrestled our primordial pine forests to extinction. Inspired by the unending riches promised by the automobile industry, we wrestled the land into paved roads. We’ve drained our wetlands and replaced them with suburbs, leaving us to wrestle with lawncare every week. You’ve heard of a “food desert,” but have you ever heard of a “green desert”? Most of Saginaw County is a green desert – we’ve impeded upon the area’s ecological diversity in favor of large swathes of monocrop – lawn, corn, and soy. This isn’t unique to Saginaw. Our style of gardening is ubiquitous across the U.S. The American landscape is significantly swathed in lawn, for example. A research group in conjunction with the University of Montana analyzed Nasa images to estimate how much lawn covers the United States. Their conservative estimation of 128,000 square kilometers means that lawns, both residential and commercial, are the single largest irrigated crop in the U.S. 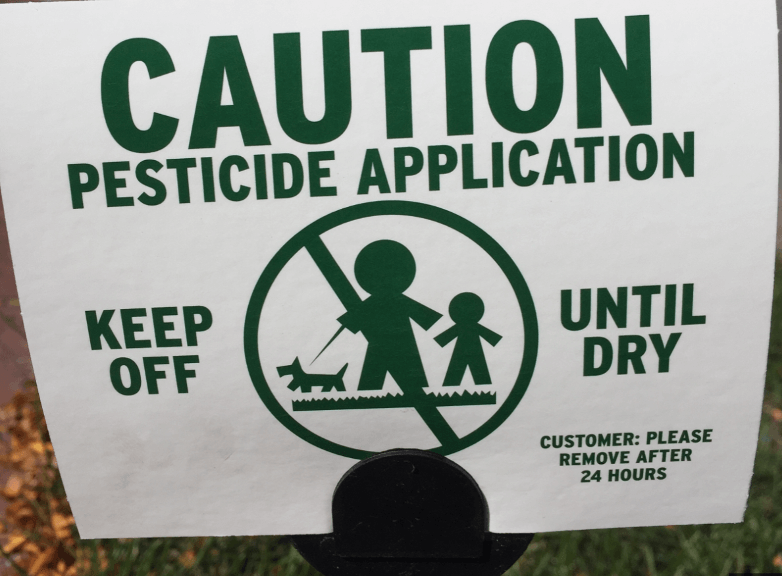 General lawn care is particularly destructive as it is commonplace. The amount of water, toxic chemicals, and energy required to keep a lawn green and pristine in Saginaw is ecologically careless. The lawn, in its modern form of an aesthetically manicured greenspace, did not emerge until the 18th century when French aristocrat André Le Notre told his servants to clip his pasture into a “green carpet” and English aristocracy soon followed suit. Before the invention of the lawn mower, lawns were a garden feature only for the incredibly wealthy. As the lawn mower developed, lawns became accessible to the middle class, and as free-time increased due to the development of the 40-hour work week, lawns eventually became accessible to the working class. The development of suburbs during the 1940s and 50s secured the lawn an American standard for gardens and yards. Integrated into our culture, we now have city policy and zoning ordinances stipulating requirements of a lawn. Failure to mow one’s lawn or properly care for it, whether the lawn-owner has the means or time do so, results in a fine. Unfortunately, we have built policy and cultural infrastructure that secures this wasteful, time-sucking, polluting garden feature invented by French aristocracy.

Overall, the American style garden is rooted in the French garden tradition. Favoring bright often non-native annuals, flowers are arranged as showcase pieces whether in beds or pots. Just as in French gardens, trimmed hedges, lawns, and fountains are a feature of our suburbs.  Appearance is primary consideration for this style of garden, overshadowing functionality.

However, there is an emerging garden philosophy that is challenging the artificial, often wasteful, conventional garden approach: The New Perennial Movement. With a focus on local species and holistic garden design, the New Perennial Movement integrates sustainable practice with an orchestrated beauty of the natural world. By utilizing regional perennials, such as grasses and shrubs, gardens take on a sleek, understated, natural modernity. Aside from its aesthetic appeal, it is a garden philosophy which prizes low-maintenance care, low-impact design, and ecologically healthy practices. Gardens are planted, not as a collection of individual specimens but, as a whole system.

Piet Oudolf, a Dutch garden designer, is at the forefront of this approach. Achieving nation-wide recognition with his design of the Lurie Garden in Chicago’s Millenium Park, he went on to design the landscape of the Toronto Botanical Garden as well as the garden features of New York City’s High Line. His current project is underway on Detroit’s Belle Isle, slated to open Spring of 2021. His design choices are grounded, not in color of flowers but, in consistent appeal throughout the seasons. Hence his exceptional use of grasses; whether bronze stalks dappled with snow or tall, verdant blades catching the summer’s evening sun, grasses and other similar perennials allow his gardens to look pleasant no matter the time of year. 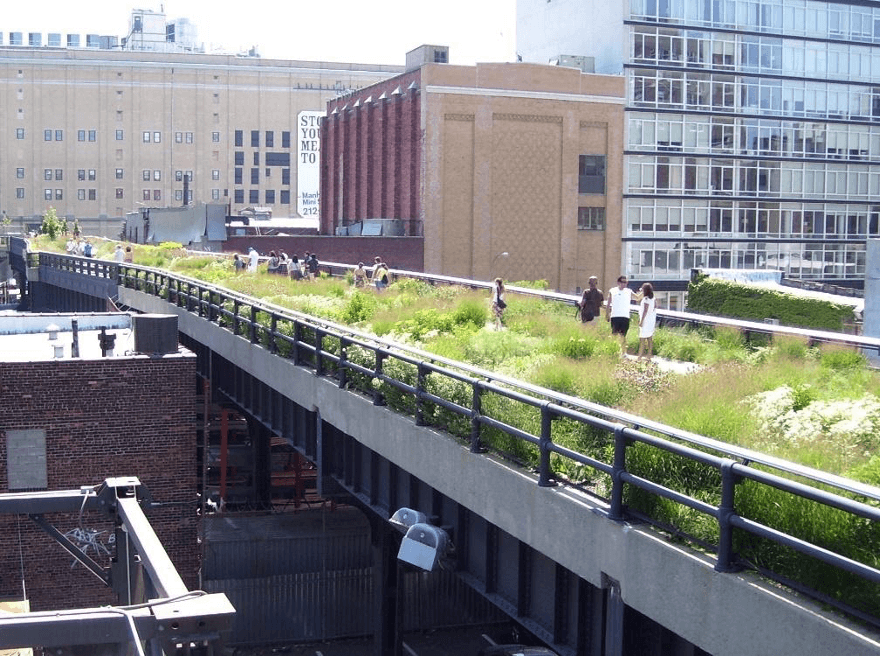 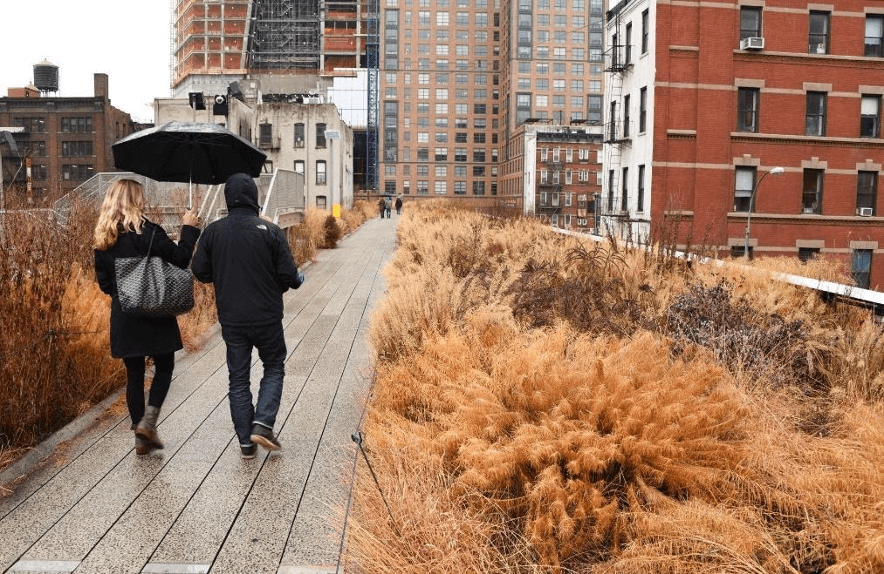 The High Line in New York City during spring and late autumn.

Our city doesn’t need to hire world-renowned gardeners in order to integrate sustainable, natural beauty in our urban landscape. As the rain garden at Delta College attests, it is already blossoming here at home. WTA architects has shown Saginaw that an attractive and resource efficient-garden, using mostly locally adapted and native grasses, is possible. Let it be an inspiration for the city to further implement restorative garden features. For example, Ojibway Island is eroding along the western bank and the Saginaw Parks and Recreation Department is investigating tactics to halt that erosion. Generally, much of the bank’s erosion is caused by lawn with short roots, thus allowing the river to easily wash away the soil underneath. Let’s hope Parks and Rec will consider using native, wetland grasses whose deep root systems mitigate riverbank erosion. As seen in the philosophy of the New Perennial Movement, the future of garden design contains both aesthetic appeal and functionality.

There is so much potential in the wetland hidden beneath the concrete parking lots of our city. Let’s hope more individuals, institutions, and businesses will continue to promote the ecologically healthy and cost-effective use of native flora across our neighborhoods. It is fully within the Saginaw’s power and means to infuse natural habitats and restorative gardens with our urban landscape – if not directly, Saginaw can indirectly do so by unabashedly supporting the groups who do restorative projects and implementing ordinances that ensures such ecological visions take root. We can’t continue to wrestle with nature so let’s make peace and help her out.