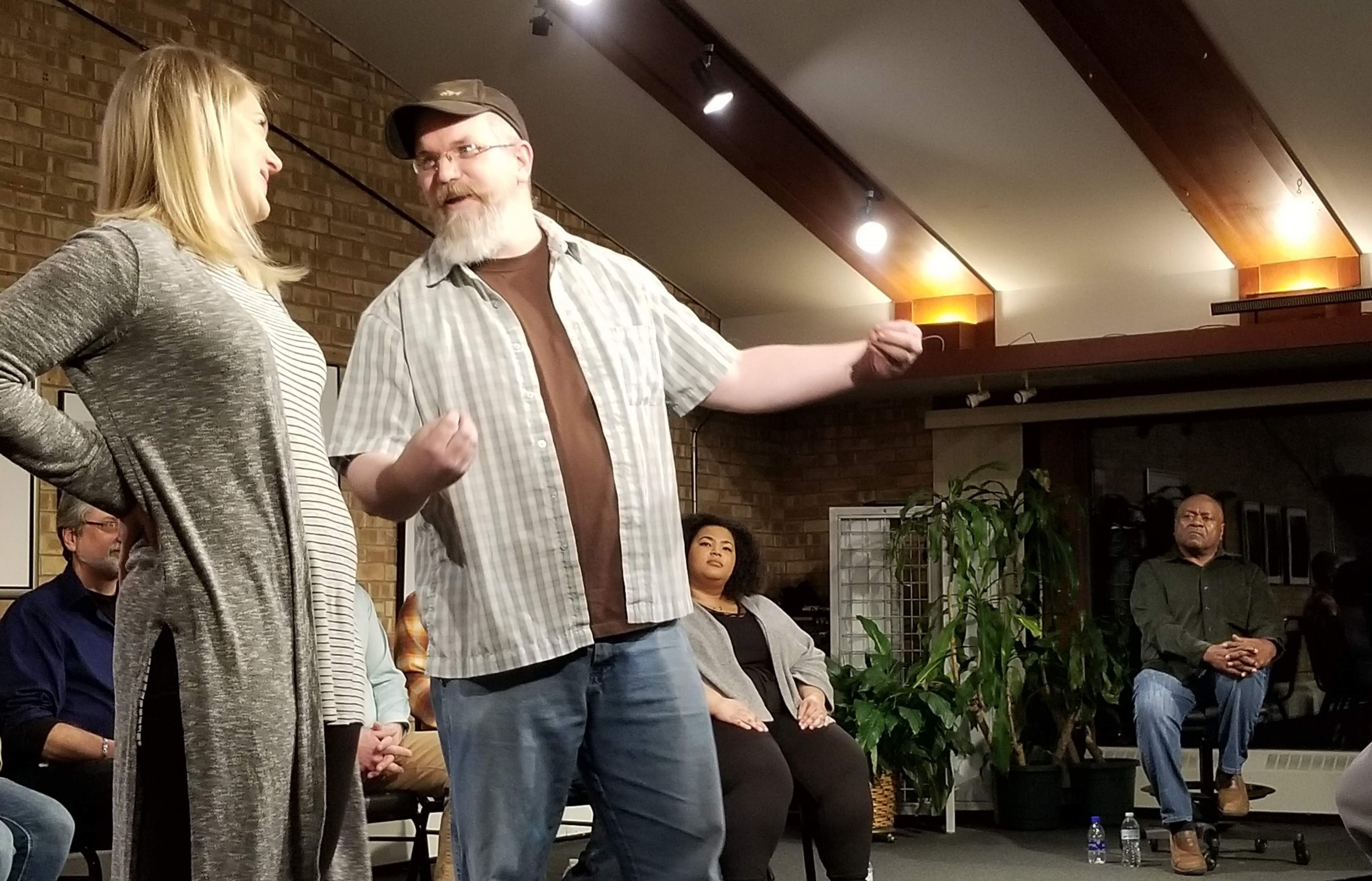 It was their  eyes.

Deep, into the very depths of the soul eyes.

Sometimes you just had to look away.

But they were only acting.

Creative 360’s production of “The Exonerated,” which ran Friday and Saturday, is one for the theater records in MidMichigan and truly a profound lesson in what acting is all about.

The intimacy of the small Midland arts facility helped. For  people in the very front row of tables, the actors were about an arm’s reach away so you were literally in their face, or more precisely they were in yours.

But director Michael J. Wisniewski also had assembled a crackerjack cast and directed them to absolute perfection in which, as noted, their eyes, their mannerisms, their pauses, their facial  expressions spoke volumes beyond the searing script. Even when they were not talking they stayed in total character.

“The Exonerated” is about six  Americans who were arrested, convicted, sentenced to death for crimes they did not commit, and finally exonerated. Black men, white men, a mother,  one for killing his parents, some who were in the wrong place at the wrong time – like getting in the crossfire of a shooting gone bad and then getting kidnapped.

Their stories are told in a narrative and progressive style with no set and minimal costuming; just the words of the playwrights who interviewed them.

And added in are actors portraying police interrogators and witnesses, prosecutors and defenders, girlfriends and family members.

While the entire cast was outstanding as we said earlier, five really grabbed by the throat, or at least for this viewer.

Katie MacLean-Peters portrayed the mother who was in the wrong place at the wrong time —  only recently added to the cast when the original could not continue in the role. Yet every fiber of her being – her hand gestures,  her body language, her voice timber, frustrated and optimistic, telling perhaps the most tragic of the six stories, she was breathtaking. She was in prison 17 years; her children adults by then.

Nathan Cholger was cast as the supportive brother of one of the accused. And in portraying a phone call to his brother in prison, tears rolled down his cheeks faster and faster. It was one of those look away moments; it felt so much like you were intruding.

Steven P.  Holty was cast as the man accused of murdering his parents, so severely interrogated for 12 hours he began believing he actually did kill them. He just oozed of his internal pain.

Dexter Brigham was a  kind of shy and awkward man accused of killing a woman. Chewing his nails, pausing, fidgeting with his hands, jittering his legs,  looking downward he recalled that 14 other convicts in the prison were executed in his 22 years there, recounted the sounds of the electric chair but in the end was joyful married man.

And Kevin Kendrick, who rehearsed his role from his home in North Carolina over the phone with the rest of the cast, was a  hitchhiking the nation guy minding his own business, when he was accused of rape and murder. He was the poet and the narrator of the cast, the calming wise sage of the production

Says his character, “if you dream in this world it is dangerous.’’

While the show presents a damning portrait of our legal system, and leaves every viewer  sitting there thinking oh my god this could happen to me, there are also very wonderful moments in its narrative and  presentation by the cast.

It is, after all, a play about surviving against all odds.