The People Respond to Man’s Fight with the Heavens 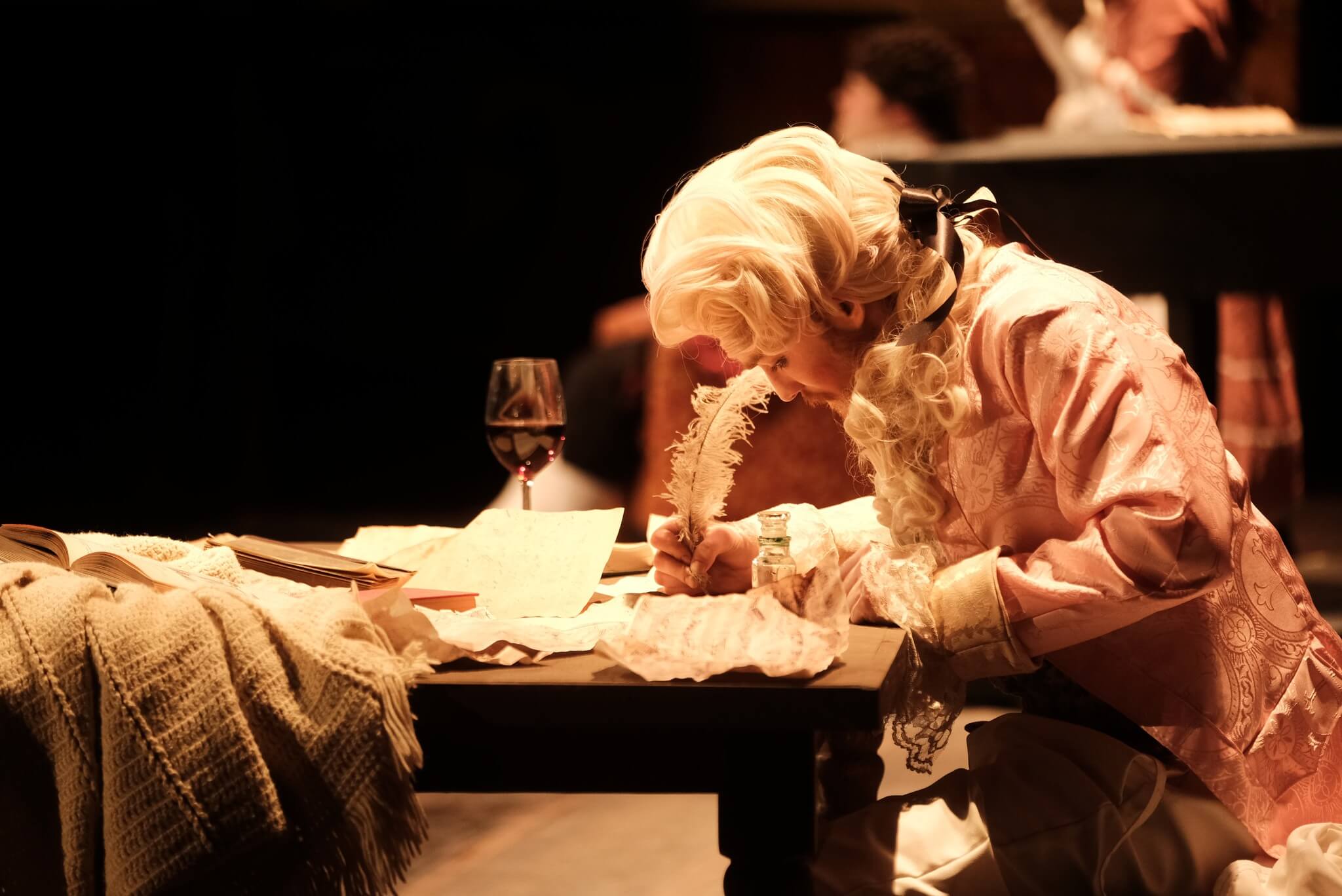 Saturday night we were privileged to be a part of the audience for a community arts collaboration of “Amadeus” at the elegant and historic Temple Theater.  The performance featured 9 actors from Pit and Balcony Community Theater, the full Saginaw Bay Symphony Orchestra and members of the Saginaw Valley State University and University of Michigan choirs.  Audience members were presented a theatrical performance that produced joyous response at many moments through the evening.

The collaboration is four years in the making.  If one part of the collaborating organizations had been off even a little bit, the whole production would have been lost.  But, much to the delight of the audience, every actor, singer and orchestra member were firing on all cylinders. In a way it was a celebration of the history of art. The play itself is a reflection of the artistic communities of the 1700s and the viewer can see themselves in it. Each viewer can see a piece of themselves in the mediocre Salieri, and the ever pesky Mozart.

The script by Peter Shaffer is incredible. Albeit long. The writing encapsulates the philosophical and reverent nature of composing music for royalty in the 1700s. There are many nods to religion, catholicism, and the customs of the time.

The set design was minimal but able to create the atmosphere for the differing scenes. In fact the restraints produced by players sharing the stage with members of the symphony and choir, created a cozy, real life feel. It would’ve been an all together different show to have an orchestra hidden in a pit somewhere.

In one of the most dazzling scenes, Salieri breaks the fourth wall to address the crowd, fuming with jealousy over a piece Mozart has composed. It featured Catherine Moss, a stand out among a superb group of guest vocalists. The orchestra struck up, she strutted to center stage and let out one of the most beautiful musical phrases one could even imagine. The players looked on. The scene concluded with Emperor Joe telling Mozart he uses “too many notes.” This got a great laugh from the audience. One of many, many laughs and responses from a very enthusiastic crowd.

Act one concluded with thunderous applause. Peter Shaffer’s script was wrought strong by actor David Ryan. His Salieri was a comic basket case. He threw his voice all over, up and down. But this final monologue of Act 1 was one of the highlights of the show. The culminating line of arrogance foreshadowing all of Act 2, stating “men are here to teach God his lessons.” The crowd response was huge and the energy was palpable.

Mozart as played by Nathan Hanley got an equal reception. Especially in an Act 2 monologue in which he pleaded, “am i not just a good fellow?” Why was everyone against him? Everyone conspired against him to make things hard, when all he wanted to do was kiss up a few ladies and make some fart jokes. Things for the common stinking person. And who couldn’t relate? Inside of all of us, is the composition of the entire universe. Our good fellow Wolfgang just wanted to make that apparent.

Yet not enough good can be said. The play was a delight and a triumph. The climactic scene moved some to tears. The drama of the choir singing while Stanzi (played by Barbie Carr) wept was extremely moving for community theatre. These two reviewers here have seen our share of performances, from DIY black box, to punk rock shows, to stand up comedy and in between. The confluence of tragic death, in the beautiful temple theatre, well directed, well lit, soundtracked by heartbreaking vocalists, transcended itself and rose to the level of art. Soft A.

Costumes were perfect for the period.  Lighting and sound were spot on.  From the very first note to the final drop of the blade at the end, I was completely enthralled and transported to 1700’s Vienna.  The choice of the Temple Theater as the venue was inspired. Technical components from blocking, to editing some of the script, were all well executed.

Kudos to the progressive and daring SBSO. If you are paying attention, you will notice they are constant collaborators. Working with a dynamic range of people and organization. Sweat and grace always visible from their pop ups to their full bore events. And many thanks to all of the people who make something like this come to fruition. Actors spent weeks of their time rehearsing, symphony members years practicing. All to appear effortless while humanity wrestles with god.

No plug for the next thing inserted here. Sit back reflect for a minute then get out there and connect with the spinning world.