The Ultimate Selfie: Kusama in Toledo

Venue: The Toledo Museum of Art 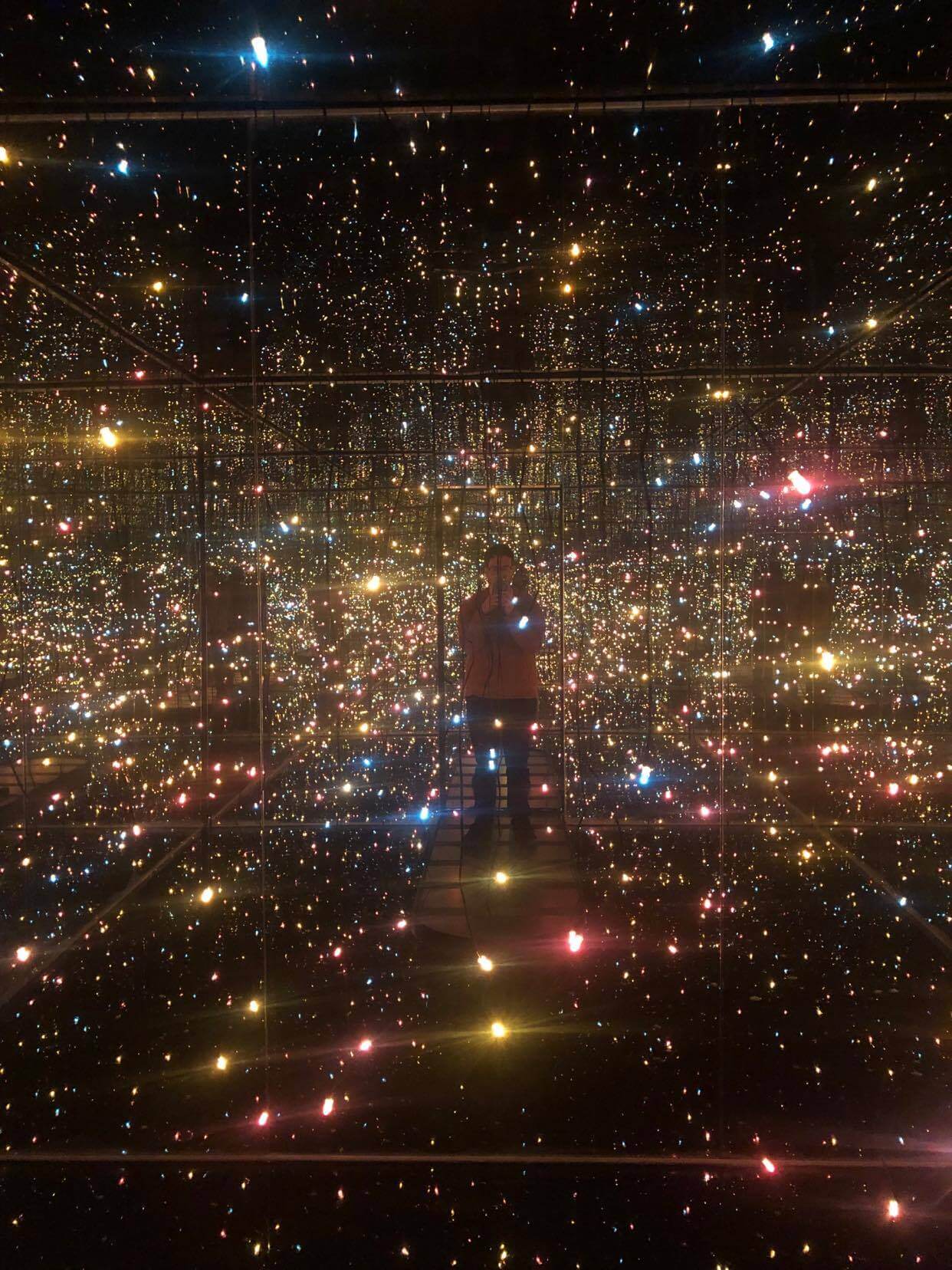 I went on a pilgrimage to take a selfie.

The year is 2020 and everyone is carrying a tv in their pocket. The world is becoming conscious of itself. Self awareness pervades every social situation. We have an idea of the self, and we see what the self looks like, reflected back to us, through social media. It is increasingly difficult to separate the two. Yayoi Kusama, the princess of polka dots, has become a household name as common as Barbara Walters and Audrey Hepburn. Okay, maybe not that common, but they were all born in 1929. At 91 years old, Kusama’s work is some of the most important in any discussion of art right now.

Every Monday morning, The Toledo Museum of Art makes tickets to Fireflies on the Water (2002) available for the week. Promptly, the weekend sells out. And most weekdays become sparse and harder to get into as well. It only costs $5 for 60 seconds of viewing. Presumably, you could buy several slots, but it doesn’t seem like many are. On Friday nights, Saturdays and Sundays, they are lining up 60 people an hour to take a selfie in the Infinity Room.

Go to your local museum. Observe the lines of people. 15 new people, some holding children and babies, every 15 minutes. A bit tongue in cheek. It isn’t happening. I took a visit to the Philadelphia Museum of Art this year (I have a great interest in the Duchamp holdings there as I myself am also a creative prankster) and let me say, even at an illustrious institute such as that, the lines aren’t like this.

But there are a great many people out front, taking selfies on the steps immortalized by the great artistic darling, Sylvester Stallone (Rocky Balboa).

What does this mean to art? Rocky is a great film, but should Duchamp’s contributions to mankind be ignored? Are people’s interests in Rocky more crude than my interest in Duchamp? The answer is no. The question asks amiss. Because of course, on my way in, I took 100 selfies on those very steps.

Enter Yayoi Kusama and the Instagram Trap. This is one of many current states of contemporary art which is blending the two modes I have just been discussing. High art and the selfie. One that is stimulating in many directions. An immersive experience, if you will. The piece is part of a collection of Infinity Rooms that are touring currently. The piece in Toledo is on loan from the Whitney in NYC. It is a 12×12 box made of mirrors. With 150 lights placed inside (much like ordinary christmas lights) and a small moat of water at the bottom. The mirrors reflect each other infinitely, as well as the lights.  This creates an effect that is meditative or hallucinatory depending on your mood. Outside the exhibition, every 15 minutes they warn the new group that if you experience vertigo or anything of the sort, it could be overstimulating.

Yayoi has been contributing to vertigo for a long time. All of her work is dizzying. But it is the advent of the smart-phone that makes her work so important right now. Everything has been leading to this. She made Fireflies on the Water in 2002. Selfies weren’t quite the thing they are now. This is a testament to her own artistry and pure motivations. That she sought to recreate the visions in her mind, without a sense that the public would be so enamored. But the Yayoi we know today is the one of social media.

In my small Midwest city, a decade ago, I remember hearing of the Williamsburg music venue, Glasslands. It was a happening spot, but it also boasted an art installation above the stage that looked like clouds lit by electronic means. This produced the most epic pictures of bands. It made the place all the more appealing: to attend, to play it, to photograph, simply to be associated with. Concerts and music festivals since the mid 2000s have taken these philosophies and run with it. Coachella has become a whole category of clothing on fashion websites. I have personally set up stations inside of festival grounds that look like giant Barbie Doll toy containers. Festival goers can have their pictures taken while standing inside. For a place to be worthy of our time, it has to look good on the ‘gram.

The age of the selfie has been upon us and it is finally hitting museums and the art world. Brooklyn, always ahead of every trend, had The Dream Machine in 2018. Or at least I noticed it in my feed. People taking selfies in foam pits and mirror rooms. The Museum of Ice Cream in SoHo is open nearly 12 hours a day as a permanent place in 2020.  Entire operations dedicated to eye popping color and shiny objects.

Do we scoff at these pop ups? Do we mark them as shallow? Or do we realize the depth in all things in our surroundings? Well, I think we only need to look at Starry Night in MoMa for an indication of how to cope. For anyone who has visited on the weekend, they know that it is constantly mobbed and at any given time you can hear a minimum of 5 languages being spoken near it. It is of such monumental appeal and stature that hordes of humans are constantly taking selfies near it or just plain pictures of it. Certainly critics aren’t disregarding this work of art due to its photogenic appeal.

This is to capture the moment. I was there. I saw the great work. And the pop ups, while trendy are riding this very spirit.

And this brings me to the point. I know the readers here are intelligent. Anyone that gets ahold of this is cultured, knowledgeable and experienced. And therefore, I think we’ve all had the experience of being moved by a work of art. And likely, the experience of thinking “I could do that” while we stood in front of whatever minimalist movement or whatever it may be. But this crest of selfie inducing art, this wave of shiny and colorful work, is about feeling.

It is a zeitgeist involving the most universal and ubiquitous object in our lives today: the smart phone. And about the most important thing in art through all of time: us.

Yayoi Kusama has been pushing boundaries since she painted polka dots on naked humans inside of museums in the 1960s. It makes perfect sense for her to be a lynch-pin in an art movement happening right now. When we look back at the days The Salon Jury rejected Pissaro or Manet, we give a chuckle. It is presumable that 100 years from now we will see how The Selfie shaped art in a much different way than we experience it in the present moment.

Yet, even if none of this is true, that it can certainly be shown that The Toledo Museum of Art was able to show more of its offerings to patrons the day I was there. And what offerings they had! There was so much incredible work on display. Young people, old people, a diverse array of cultures, sophisticates and non-sophisticates alike, all walking around taking in the collection and the other exhibitions. Fireflies on the Water will be available until April 26. Apple maps says it is a 2 hour and 3 minute drive from my location here at the Saginaw Art Museum. And thousands of glowing selfies say you should go see it.