Three Viewings: Many Funerals and a Laugh 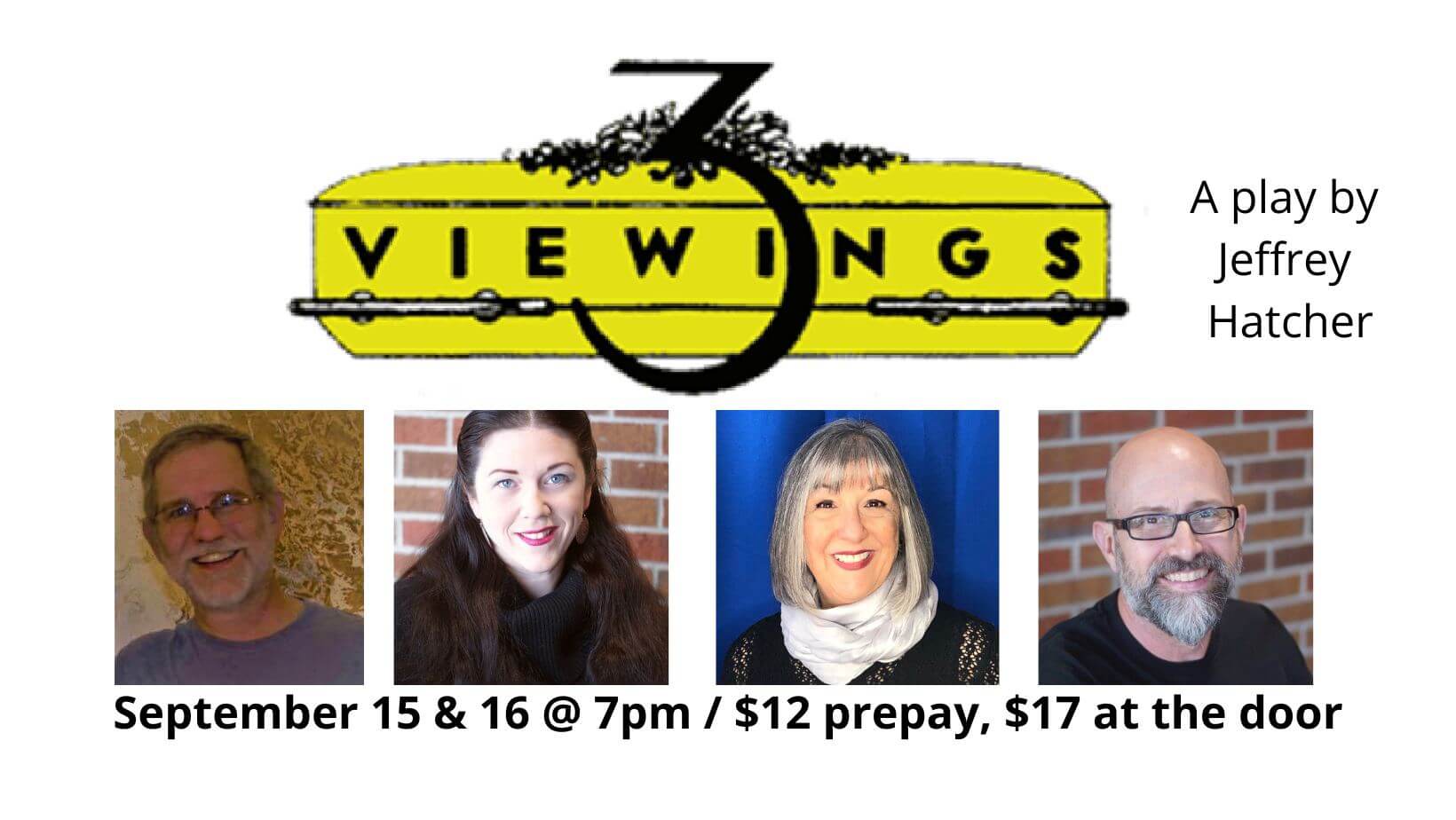 “I love you”, “I’m not married anymore, my husband never fixed the kitchen door”, “Mary had a little lamb”, these three phrases are an integral part of the three people represented in the play Three Viewings, written by Jeffrey Hatcher and directed by Michael Wisniewski.  Wisniewski brilliantly chose Jim Stewart (Emil- the funeral director), Laura Brigham (Mac- the granddaughter) and Carol Rumba (Virginia- the widow) to portray three grieving people who are at a funeral home for different reasons.  They aren’t there for the same funeral or even at the same time.  They aren’t experiencing the same emotions.  But each of them is feeling, good feelings, bad feelings, sad feelings, sentimental feelings, feelings of longing and loss.  Over the course of three monologues, you learn who these characters are, why they are at the funeral home, what they are feeling about being at the funeral home and about the person who has died, and what feelings and memories they have about the deceased.

Emil (Jim Stewart) is the local funeral director.  He has seen many funerals over the course of his career.  He has seen the same mourners show as people in the community have passed on.  He remembers what they were like when they were young and how they have gotten to their social position in life.  Emil longs for one mourner in particular, Tessie.  Although he is married, he has pinned in his heart for a very long time.  Will she ever know how he feels?  Will he ever tell her or will he just whisper it into the air as she walks by?  Only time will tell, as the community gets smaller with each passing.

Mac (Laura Brigham) is the “grieving” granddaughter, called home by her father, Donald, to attend her grandmother’s funeral.  Mac ran away from her life in this Midwestern town and settled in California, must to the dismay of her family, who cannot understand her reasoning.  She has made a life for herself, found a career.  Her career is not one that would be considered acceptable by most, but Mac justifies it as a means to an end.  With the skills she has gained over the years practicing her trade, she will finally have that one thing that she has always wanted from her grandmother.  She’s earned it.  And she never has to tell the real story of where her husband and children are.  Or will she?

Virginia (Carol Rumba), unlike Mac, has no secret.  She is a grieving widow, mourning the loss of her beloved husband, Ed, and trying desperately to remember when and where they met.  She remembers him just always being there.  He provided a good life for them and their only child.  He was a good man and she weeps for the fact that she was not with him when he passed.  Ed had a secret, though.  His secret is revealed in the days following his death, and Virginia must deal with the fall out.  What will she do?  Ed was the wheeler dealer, he is the one who always took care of things.  She’ll be strong, she’ll go on, although she isn’t quite sure how.  Even in death, Ed is there for her.  He knows her so well and with that knowledge he provides her with all the answers that she will need.  She isn’t alone after all.

Creative 360 is the perfect venue for this production, close, intimate.  The audience truly feel like mourners at a funeral.  The set is minimal, a couch, a side table, three pedestals with flower arrangements that are changed as a new performer steps to the stage to begin their monologue.  The lighting is low, creating a quiet, somber effect.  There is quiet organ music playing in the background.  Kuddos to Tabea Hadley for her excellence in both lighting and sound.

Three Viewings is not a roll in the aisles type of play.  It is one that tugs at your heart strings and makes you think.  It brings to the surface all of those feelings that one might have at a funeral, sadness for the loss of the deceased, regret for things not said, anger for things that were, and a determination to do better in the life that we have left.

This is a play that should not be missed.  Join Jim, Laura and Carol on their journey as they present the stories of Emil, Mac and Virginia during one more performance on Friday, September 16, 2022 at 7 pm at Creative 360, 1517 Bayliss, Midland MI.  Find out what those three phrases really mean.