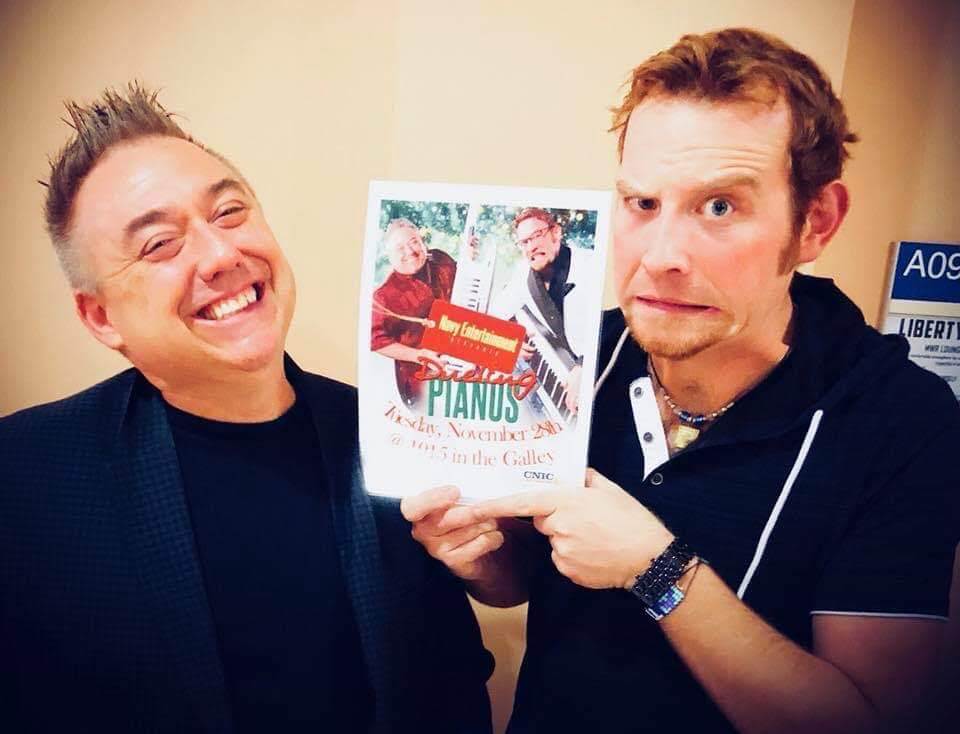 With a quick glance at the audience and request in his hand, Noel Leaman, director and mainstay of Cool 2 Duel, peered out into the crowd from the stage and asked, “Are you out there?”

“It’s a request,” he shared, “for a song my daughter sometimes performs when she comes to a show.”

Leaman’s daughter was not in the crowd at the Temple Theatre’s Grand Ballroom at that moment—but my daughter was.

Does one take children to see Cool 2 Duel Dueling Pianos? Didn’t know; never been. However, I’m always looking for opportunities to expose my kiddos, ages 10 and 14, to the arts. So while others may not be bringing their children, I was—and a “mom-daughter date” it would be.

True enough, Hope was the only 10-year-old at the Nov. 20 show. But she wasn’t horribly out of place, and she had as much fun as the mixed crowd of senior citizens to millenials all around us.

How could she not? A charismatic, high-energy show, Cool 2 Duel Dueling Pianos was two crazy-talented pianists and artists, Noel Leaman and Dan Lousiell, and 90 minutes of sing-along, clap-along, comedy-meets-musical-genius entertainment:

— Audience Lead. Guests are encouraged to make requests (and those delivered to the stage with whiskey cocktails earn higher ranking)! Performing requested classics like Johnny Cash to 80s hair band Poison, it seems there aren’t any songs that these two can’t put their magical spin on.

— Elton John in the House. Not only did Leaman blend four Elton John songs into one, mixing “Tiny Dancer” into “Bennie and the Jets” like a musical wizard, but an audience member was given a burgundy suit coat, red feather boa and electric pink oversized glasses to become Elton.

— Boys vs. Girls. Unsuspecting ladies wound up competing for cheers with a kickline to Frank Sinatra’s “New York, New York” while middle-aged men got mega roars to KC & The Sunshine Band’s “Shake Your Booty.”

Three-quarters of the way through the show, a group of 20-somethings walked in and—what’s that? Leaman’s daughter was now in the audience?

Indeed! Taking the stage for a dad-daughter duet, this songbird stole the show as she let wide open singing “Shallow” from “A Star Is Born.”

It was Cool 2 Duel Dueling Pianos, two daughters, and a five-star night.