By the Light of the Night, It’ll All Seem All Right 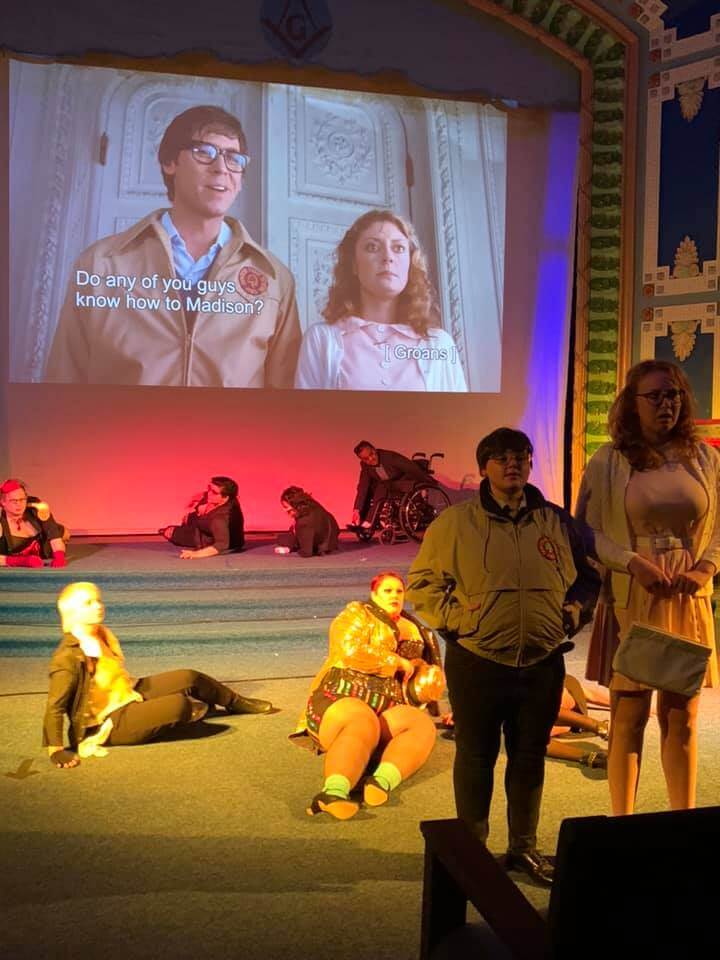 My partner and I had a perfectly normal date night out last Saturday evening. We went out to dinner at a respectable restaurant. We got grown-up cocktails at a grown-up bar. And we took in a show. But we were dressed a little… differently than normal. I wore elbow-length gloves, a white wig, and purple lipstick. He wore a bow-tie, top hat, and eye-liner. (I couldn’t find my fishnets… nor could he find his. This will be rectified ASAP, but meanwhile we made due with what we had around the house.)

October 2nd. A little early for Halloween costumes. And what characters were we playing, anyway?

The show we were attending that evening was The Rocky Horror Shadow Cast, put on by Vanishing Elephant Players at the Masonic Temple in Bay City (700 N. Madison Ave., 48708).

And we were costumed as another version of ourselves. A Rocky Horror version.

The Rocky Horror Picture Show, of course, is the 1975 quintessential cult film of the “musical comedy horror film” genre (what?), a Greek/Shakespearian tragedy featuring an evil-but-somehow-heroic alien transvestite (what?). Improbably, it’s the longest-running theatrical release in history. In short, the alien cross-dressing mad scientist Frank-n-Furter traps and seduces the super-straight “normal” Brad and Janet, while power-tripping on his staff of mostly former lovers, making a literal meal of a former lover/perceived rival, and indulging himself by creating a perfect specimen of a man (Rocky) who spurns him (a la Frankenstein’s monster) among other things. Frank gets what’s coming to him in the end, and the story ends with several characters dead and Brad and Janet crawling from the wreckage to presumably resume their lives. It’s crude; it’s campy; it’s loaded with taboos.

A shadow cast is an ensemble of artists that act out the movie while it is playing. Vanishing Elephant Players’ shadow cast were spot-on with their live version mirroring the action on the screen. The timing was impeccable; the gestures were nuanced and exact. The costumes were created and gathered by Director/Costumer Erica Tatum and other Players, and perfectly captured the look of the film, from Columbia’s marvelous sequined dance outfit to Riff Raff and Magenta’s triumphant retro-future space suits. They produced some impressive set pieces including Rocky’s tank, a car grill (with working headlights, for driving in the rain), and crazy control panels for bringing Rocky to life. Their joyful and energetic interpretation added a dimension (literally) of enjoyment to an already enjoyable movie, bringing movie off the screen and into the theater.

But here’s where it all gets really good: the Vanishing Elephant Players shadow cast actors represent a variety of body types and gender identities not seen in the film (there are about as many they/thems in this cast as there are shes or hes) and that new representation provides a refreshing update and connection with the theme of the source material. In the movie, the bold and outrageous Frank-n-Furter is really the worst of the worst, and yet… somehow we know Brad and Janet are better off for their experience. They return to the “normal” world sadder, wiser, weirder. They’ve had their eyes opened, and by the end they’ve embraced their new-found freedom from convention. Clearly they’ve been saved from something and they will never be able to turn back into the paragons of repressed sexuality they were at the beginning of the story.

This movie, and the evolving shadow cast tradition that has been with it from the start, has been actually saving lives for generations. Emerging on the heels of the 1971 Stonewall Riots, The Rocky Horror Picture Show has established itself as a home for those who are exempt or excluded from “normal” culture. It is a self-made family. It is permission to be Other: to be different, to step out of the box society puts us in, and to discover and be one’s true self without repression or the expectation of conforming to the established norms. Vanishing Elephant Players Artistic Director Erica Tatum said, “Most of our cast is queer, and we see Rocky as something to be passed on between generations of LGBTQ+ people.” The subtext of Rocky Horror is “Let your freak flag fly!” and this shadow cast is the perfect representation of that permission.

So we (who are far more “Brad and Janet” than “Rocky”) enjoyed the luxury of visiting a wilder, weirder, sexier world than the one we inhabit. We spent the evening merely playing at something others have the courage to live in. The bold Players in this shadow cast have got “it,” and they flaunt it, baby, flaunt it! They shatter the taboos and invite us to join them in their debauchery.

Upcoming shows are at 8pm and midnight on Saturday October 16, and at 8pm on Sunday October 31. Your $15 ticket includes a convenient bag of props. (Throwing things and yelling is, of course, encouraged.) Tickets can be purchased at givebutter.com/rocky2021. Tickets can be purchased at the door, but seating is limited so it is recommended that you purchase tickets in advance. Masks are required for those not vaccinated against COVID-19. Outside props permitted, but they DO NOT allow rice, hot dogs, water, or open flame in this historic building. Snacks and themed alcoholic beverages can be purchased in the lobby. Please note that, due to stairs at the entrances and to the bathrooms, the historic Temple is not yet accessible to all. Proceeds from events (such as this one) go toward updating the building, making it possible for all to enjoy.

Get out your fishnets and go! Let there be lips!