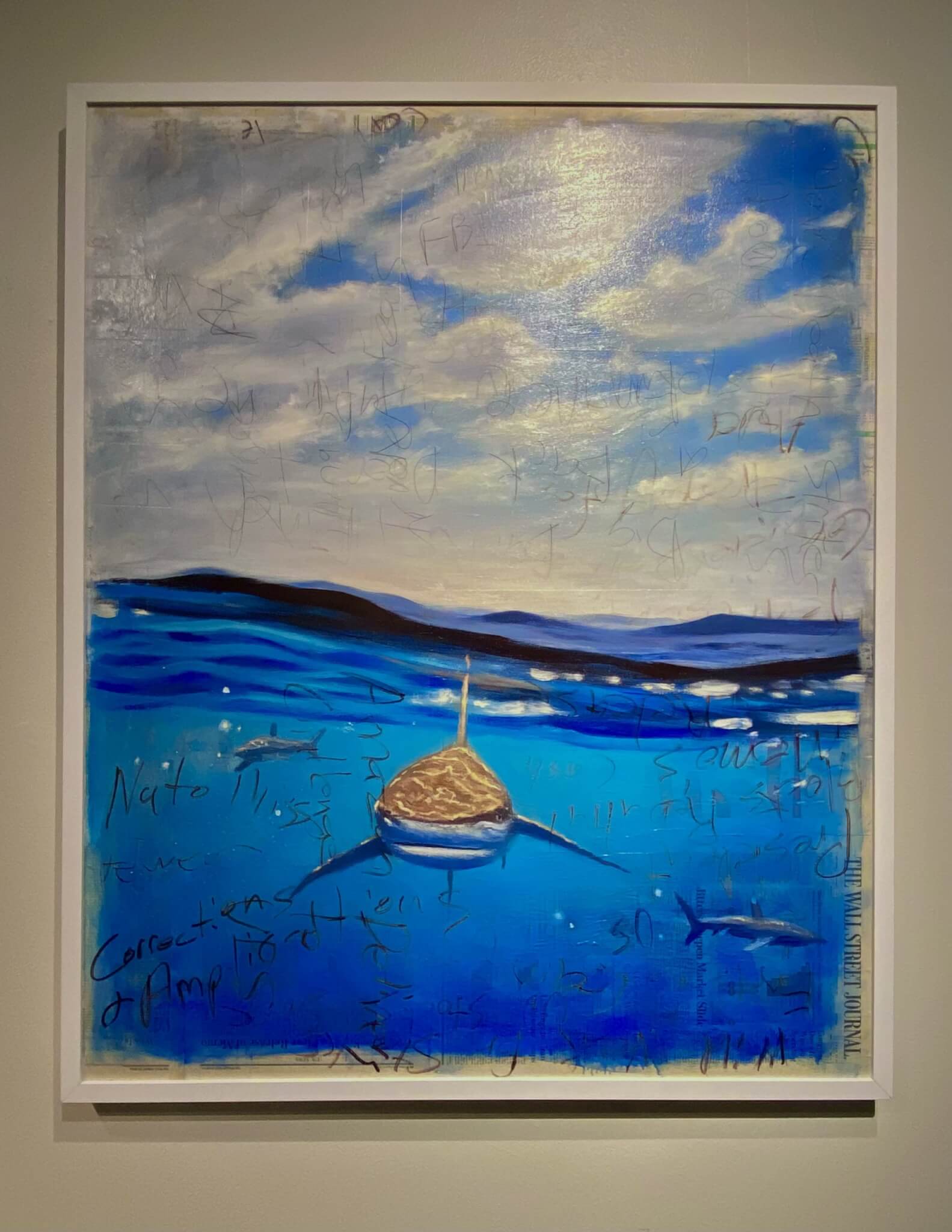 It seems as if—in daily life—there is absolutely no time to enjoy the world around you. Rarely do we find the chance to venture into nature and take it all in. Instead, we spend our days running between tasks, checking our emails, and praying that we can get at least a few hours of sleep. And what little exposure to nature we do seem to have the time for is what we can see on our screens: the aesthetic Instagram post, pictures from vacations you can only dream of, the grandeur of nature that only ever seemed real on television.

Or it’s what we read in the news. Endangered species are forced from their homes by industry. Tourists destroy another irreplaceable feature of nature. The planet is dying.

The Central Michigan University Art Gallery has just opened an exhibition by artist Adam Straus. Titled Out of Paradise, the exhibit features beautiful landscape paintings laced with social commentary on the impact of humans on nature. Even the name itself is a clever play on words: art that is coming out of Paradise, or art showing we are running out of Paradise.

Straus comes from—as the FBI file on his family would so eloquently put it— a family of “liberal Jews who advocate such things as free speech, open forum discussion, and additional opportunities for colored people.” His existence as an artist, however, can just as equally be traced to a childhood in Key Biscayne, Florida. During which he roamed free on a 12-foot aluminum boat, fully engrossed in the flora and fauna, in a front-row seat to profound changes in the environment around him. These two factors in his life can be read across the entire exhibit with an overall commentary on the relationship between humans and the natural world.

To mark the opening of the exhibition at the University Art Gallery, Straus himself gave a brief talk to the modest group in attendance about his life, his paintings, his process as an artist, and just his general thoughts regarding the world’s current social climate. As he walked us through the gallery, briefly commenting on each piece and its origins, I could not help but be in awe of this incredibly normal artist. Too often, I think, we have come to think of artists as these high-brow academic-romantic type individuals who are unknowable to us as “normal” people. Listening to Straus talk, watching him move through the gallery, hearing him say, “The process really is I don’t know why the hell I’m going to do until I do it,” it just all made him feel real, like someone you could sit down to chat with.

A prominent feature in his works is a general idea of disrupting the image of nature: a painted crack down the center of the canvas, the incredibly recognizable New York Times font bleeding through beneath the paint, his child’s artwork placed within a powerful frontier landscape. Regarding his own work, Straus said, “I would want first off for people to respond to the beauty that is hopefully captured in the painting and then maybe go on to think about the reasons for the other layerings of information in the work. Possibly the suggestion of the disruption in the natural world caused by our presence.”

During his talk, he referred to the disruption of the natural world by humans by saying how “we are profoundly messing things up.” When the talk ended, I wandered outside onto my next meeting and stopped in front of the pond at the Fabiano Botanical Gardens and watched the sun in the spray from the fountain. I thought about what Straus had said while the water rushed on, while I drove home from campus, while I wrote this article. I think a lot of his art makes you think about what we’ve done to the world and how we have to look at nature now that we’ve done it.

Everyone has something to gain by viewing Adam Straus’ paintings, whether they are an artist or not. His art engages with you aesthetically, sure, but there is also a dialogue regarding nature that can be tapped into when you look just a little closer at each painting. I invite you to visit the University Art Gallery and to take a piece of Straus’ work with you when you leave—maybe you’ll find yourself standing in silence with nature like I did.

When asked about his work being shown in a college setting, Straus said, “I loved having students see the paintings, you all are the next generation. I would love to give to you a little bit back of all that was given to me by older artists and teachers.”

Out of Paradise will remain in the University Art Gallery from October 26th to November 20th, 2021. The University Art Gallery is open Tuesday through Friday from 11:00a.m. to 6:00p.m, and Saturday from 11:00a.m. to 3:00p.m. Admission is free. For more of Adam Straus’ work, visit https://www.adamstraus.net/home.html or https://www.nohrahaimegallery.com/adam-straus.html for more information regarding Out of Paradise.