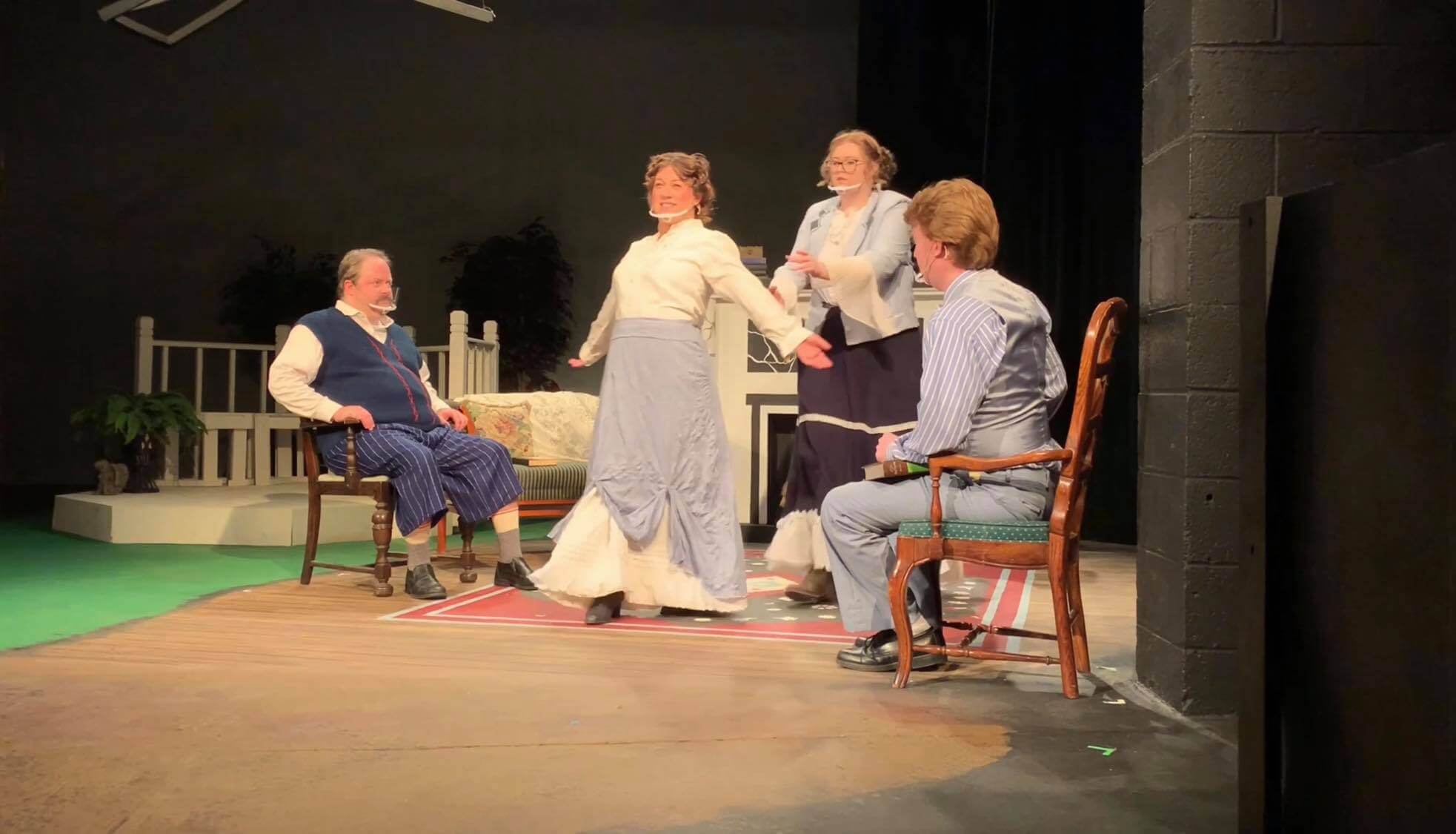 Never thought I would ever type the following about a serious real-life issue…sexual assault.

But, then, “The ‘Winkleigh Murders,” which opened  Pit and Balcony’s 89th season virtually on Friday night, is not in any way a typical play.

An Edwardian era estate heiress (played Amy Spadafore) had spent several hilarious moments begging the gardener’s bastard son (played by Spencer Beyerlein) to ravage her. And when he at long last made The Move, something suddenly happened that was classic, memorable and just plain sick.

The little-known play by Don  Nigro is billed as a dark comedy and is directed by Todd Thomas.

In my mind, it is an Edward Gorey book illustration come to theatrical life.

Gorey classified his own work as literary nonsense. And in  response to being called gothic, he stated, “If you’re doing nonsense it has to be rather awful, because there’d be no point. I’m trying to think if there’s sunny nonsense. Sunny, funny nonsense for children—oh, how boring, boring, boring.

“As Schubert said, there is no happy music. And that’s true, there really isn’t. And there’s probably no happy nonsense, either.”

That totally sums up this play, and not everyone (including myself) will find it particularly worth the nearly three hours it runs (if ever a script need heavy needed editing, it is this one).

But when it is funny, oh my God it is hilarious in what is happening and with its fractured characters and the lines coming out of their mouths.

Primarily it blisters upper class English snobbery in that era and class warfare. Loved that one one character said he had premonitions about the past. Then there’s a line wondering why the French don’t speak English. Try linking poetry, shellfish and Tennyson.

Worcester sausage takes on a sexual connotation. Picture in your mind when somebody refers to something as an Episcopalian piñata. Or a character come back in a vision saying “I could kill myself but I’m already dead.”

It is wonderfully irreverent in fits and starts. Incest and murders and family secrets abound. World War I occurs.

Yep, literary nonsense abounds for sure.

Spadafore delivers in full, playing a really cuckoo character. In fact all the cast does well with what must’ve been difficult rules to play.

Shawn Finney as Cedric the killer,  Matt Kehoe as Charles  the book lover, Beyerlein as the bastard son and Meagan Lambertson  as an orphaned ward of the estate.

The costuming is gorgeous.

On the less positive side, hopefully in subsequent virtual productions Pit will hugely improve on its virtual (stagnant) camera work, (echo) sound and (blackout) scene changes. Look for better Covid masks, too. These create  unnecessary attention along the bottom. And for heaven’s sake is it too much to include credits at the end.